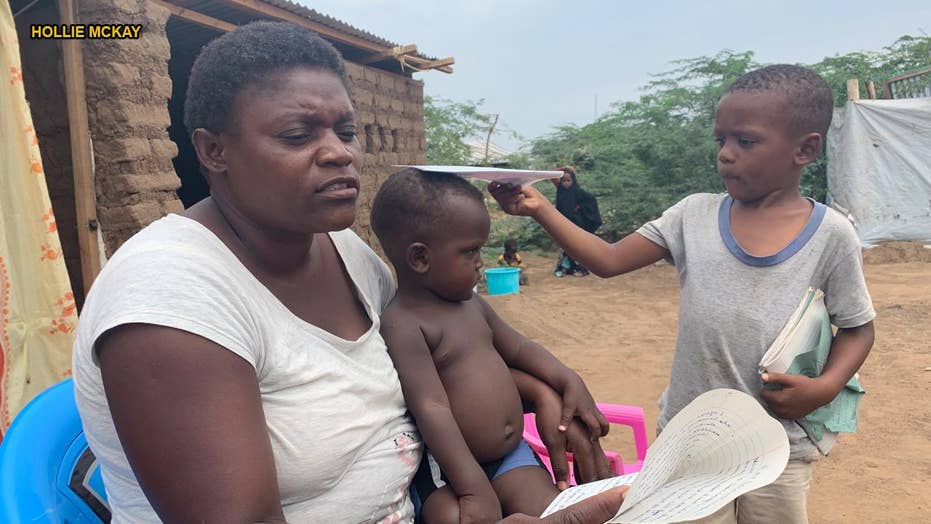 Nancy, a Congolese refugee, shares her courageous story of rape at the hands of three assailants, banishment by her own family and fleeing with her youngest son to a refugee came in Kenya where she made the decision to raise the son who was conceived as a result of the rape. Nancy's scarring personal plight is far from an isolated case, as sexual violence in the DRC has become pandemic over the last two decades.

KAKUMA, Kenya - Under the wrath of the midday sunshine outside the strewn hut she now calls home, Nancy cradles her baby son and speaks with a kind of vehement passion tinged by deep pain.

The small boy Gulio, now one, was born out of rape. But rather than hiding in the shadows of the social stigma that has been forced upon her, 39-year-old Nancy - who hails from the Democratic Republic of Congo (DRC) capital Kinshasa - is refusing to be shamed into silence.

“We are in a hopeless situation, but there is no time to worry about how to cope, my child has a lot of needs,” Nancy told Fox News. “His needs are a lot.”

Nancy fled the DRC after being brutally raped and banished by her community. She receives support from groups like the International Committee of the Red Cross. (Fox News/Hollie McKay)

Nancy’s nightmare unraveled on March 15, 2017, when three masked assailants burst into her home. Weeks earlier, her sister had been brutally beaten and left for dead and gripped by fear, Nancy knew this time the attackers had come for her.

Her wailing three-year-old son Stephane and her oldest boy, then 14, were forced to watch helplessly as their mother was bashed black and blue. And then, she was brutally raped.

“And then I was blamed and banished by my own family and my former husband’s family,” Nancy recalled, her eyes glossed by tears. “I had no one. And for weeks all I could do was look for son.”

Nancy’s teen boy, profoundly traumatized by the onslaught and the attached cultural stigma leveled on rape victims, had run away immediately after his mom’s attack and was nowhere to be found. But with her own and young Stephane’s safety at-risk, and no one to turn to, she made the harrowing decision to flee.

The bodies of people killed during election protests lie in the street, as Congolese troops stand near by in Kinshasa, Democratic Republic of Congo, Monday, Sept. 19, 2016. Witnesses say at least four people are dead after opposition protests against a delayed presidential election turned violent in Congo's capital. The protests were organized by activists who are opposed to longtime President Joseph Kabila, who is now expected to stay in office after his mandate ends in December. (AP Photo/John Bompengo) (The Associated Press)

The agonizing expedition lasted more than six weeks and entailed straddling boats, hitchhiking and long walks from the DRC through Tanzania to the Kenyan capital of Nairobi - before finally making it some 450 miles north-west to the sprawling Kakuma Refugee Camp. But around midway through the treachery, Nancy started throwing up in abnormal fits and starts.

With Stephane also sick and needing medication, she eventually found a clinic and while there took a pregnancy test.

“It came back positive, I was pregnant from the rape,” Nancy said. “I was devastated. I felt confused, embarrassed.”

Yet, she noted, there was no question of whether she would keep and raise the baby with as much love as other children.

“I believe in the right to life, the baby was inside me,” Nancy advocated. “My baby had a right to live.”

Sexual violence in the DRC has become so pandemic over the last two decades that the United Nations has referred to it as the “rape capital of the world.”

Last year, Congolese doctor Denis Mukwege was awarded the Nobel Peace Prize having devoted his life to physically mending the broken bodies of girls and women violated in the protracted unrest - having performed surgery in and provided holistic and psychological support for more than 40,000 survivors over the past twenty years.

While it is impossible to obtain accurate statistics as so many such incidences go unreported, a 2011 study published in the American Journal of Public Health estimated that at least 48 women are raped every single hour in the DRC. Such a “weapon of war” has continued to reign with impunity, designed to decimate a woman’s identity and honor and tear through the framework of families and communities.

Along with the regrettable veil of humiliation cast over mothers, the children conceived from rape also face extreme challenges and social persecution, ostracized by communities and often viewed as enemies.

But Nancy, who once held a respected office job, remains determined to provide her young boys with as much love and guidance as possible, despite having nothing to her name, being unable to work given that she is raising two young children, and receiving little aid and moral support outside those with the International Committee of the Red Cross (ICRC).

“Someday I hope I can set up a business here in the camp,” she said. “Maybe selling food and household items to other refugees.”

Yet in a small silver lining, Nancy - as a result of the ICRC in partnership with the local Kenyan Red Cross and their efforts to restore family links - was able to reconnect by phone with her oldest missing son in the DRC and learn he was safe.

“God will take care,” she whispered.

Restoring Family Links (RFL) for those displaced around the world. (Fox News/Hollie McKay)

While Nancy knows she will likely never seek justice for what was done to her, and her family may never stop blaming and eschewing her for what endured, she remains committed to speaking out for those being victimized.

“Even here at the camp, if I see a kid being beaten by another kid I will try to have them talk it out,” she underscored.

And along the dusty tracks cleaved between the debilitated shacks more than 180,000 mostly African refugees - who have been implicated in an ever-developing web of wars and mass human rights abuses - call home, a weather-worn sign glistens.

“An eye for an eye will only make the world blind,” the scratched sign reads. “Stop the revenge.”