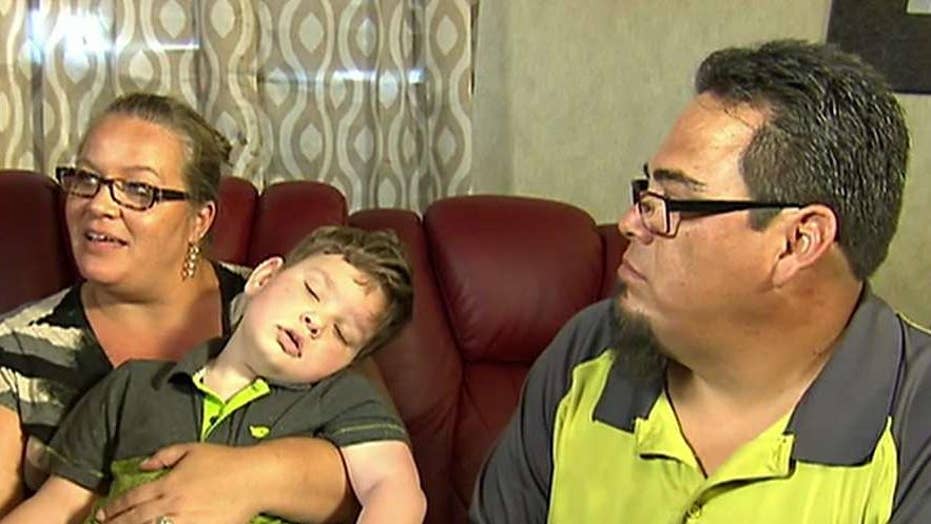 After trying to get pregnant for 16 years, Shannon and Robert Contreras decided to adopt a baby from an acquaintance who was pregnant but unable to keep the child.

When the Houston-area couple brought home their son, Robert, Jr.— nicknamed "Bubby"— they noticed some strange signs. The doctor first suspected colic, but sent the family to a neurologist, who discovered Bubby was going into 20-minute seizures. On the day the adoption was finalized, they were told their boy's diagnosis: intractable epilepsy and ataxic cerebral palsy.

According to the Epilepsy Foundation, intractable epilepsy is defined by seizures that persist after at least two good medication trials. Seizures do not respond to seizure medications and severely interfere with quality of life.

Bubby, now 5, takes seven medications, has seizures almost daily and is unable to sit, stand or walk on his own.

"But he has an amazing personality," Shannon told Fox News' Jon Scott.

Robert quit his job as an electrician and Shannon was let go from her job in the oil industry. She recently found a job in health care.

"We're taking this financial hit, but of course our biggest concern was our son. The epilepsy started getting worse and worse," Robert said.

Bubby was having 25 to 30 seizures a day and operates at about the level of a 6-month-old infant, his parents said. The couple takes turns sleeping in shifts to monitor Bubby for signs of seizure.

Now, supporters have started a GoFundMe page to cover the cost of Bubby's medical necessities that are not covered by Supplemental Security Income (SSI) and Medicaid. They've raised over $200,000 of their $250,000 goal.

“We don’t want anybody to give us anything, but we’re put in this position where we have to do whatever we have to do for our son, and we will,” Robert said.

The family is staying positive amongst the challenges, though.

“We have a good life,” Shannon said. “It’s not all doom and gloom.”

“Don’t feel sorry for us, because he enjoys life his own way,” Robert said. “We just love sharing in that.”