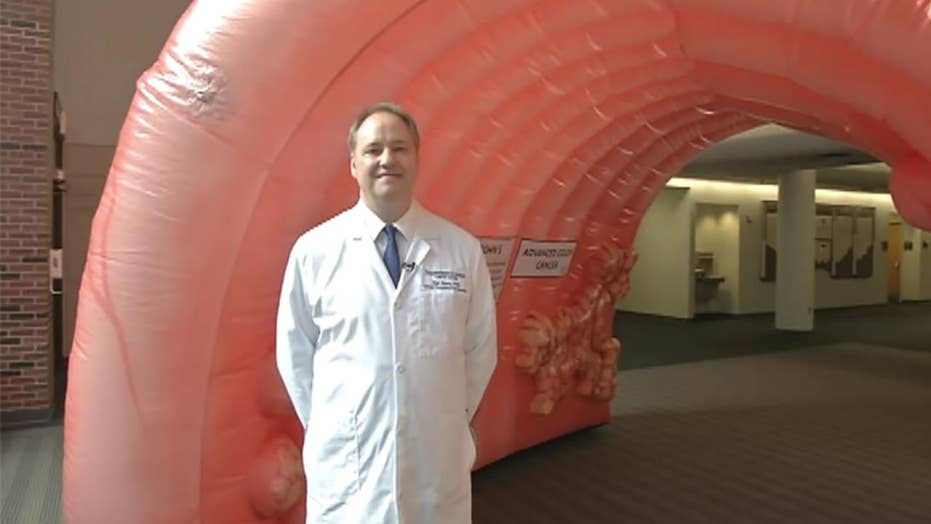 Raw Video: The University of Kansas Cancer Center asks general public for help in recovering inflatable colon. The inflatable colon which teaches the dangers of colon cancer is valued at $4,000.

A giant inflatable colon that was stolen from the University of Kansas Cancer Center nearly two weeks ago has been found, police said.

The "giant, inflatable, pilfered intestine" was recovered from a house in Kansas City, Missouri after investigators followed up on a tip. The Kansas City Police Department tweeted on Monday that nobody has been taken into custody yet, noting their investigation into the theft is ongoing.

The "stolen colon" — weighing 150 pounds and costing more than $4,000 — was poached from the bed of a parked pickup truck in a Kansas City neighborhood on Oct. 18, according to the Colon Cancer Coalition. It was supposed to be displayed at a breast cancer 5K on Oct. 20.

On Saturday, the American Society of Gastroenterology offered a $1,000 reward to anyone who came forward with information regarding the missing colon.

The inflatable colon is often used as an educational tool by medical center staff for various university and community events.

A fundraiser organized by the Colon Cancer Coalition to buy a new colon raised over $11,000 of its $4,000 goal by Monday evening. The group said that because of the generosity of Quest Diagnostics and Salix Pharmaceuticals, the coalition will now have two inflatable colons — three, if you count the recovered #StolenColon.