FDA issues warning on Ambien and other popular sleeping aids

Popular prescription sleep medications are getting a new 'black box' warning label from the U.S. Food and Drug Administration.

Women who sleep with a TV on or with other artificial light in the room may have a higher risk of weight gain or obesity, a new study claims.

The analysis, published Monday by the National Institute of Health, used questionnaire data from 43,722 women between the ages of 35 and 74. The women were asked about their sleep habits and whether they slept in total darkness or in the presence of artificial light from a television or nightlight.

The women’s weight and body mass index measurements were collected when the study began and compared with new figures from a follow-up visit five years later.

The study found that women were 17 percent more likely to have gained 11 pounds or more over a five-year period if they slept with a television or other light on in the room than those who slept in dark rooms or with a small nightlight. Sleeping with a light on outside the room resulted in a small weight gain, according to the study. 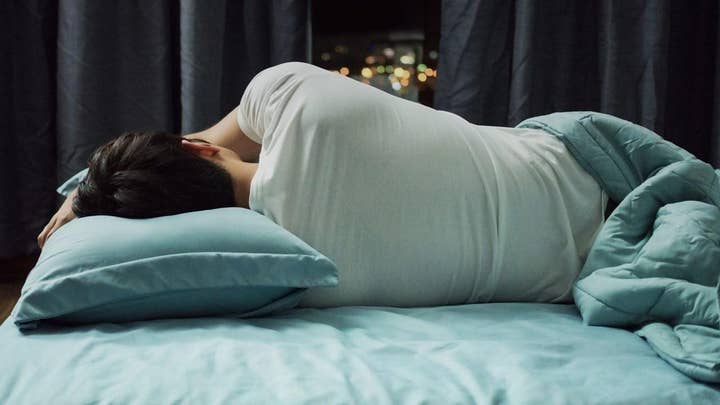 NOT SLEEPING? THAT MAY MAKE YOUR SOCIAL LIFE A SNOOZE

"Humans are genetically adapted to a natural environment consisting of sunlight during the day and darkness at night," Chandra Jackson, Ph.D., and the study’s co-author said. "Exposure to artificial light at night may alter hormones and other biological processes in ways that raise the risk of health conditions like obesity.”

Researchers also said that while not getting enough sleep is associated with weight gain and obesity, it didn’t explain the link between sleeping with artificial light and weight.

The study, which didn't include men, admits that there are other factors that could explain the weight gain, such as age, race, socioeconomic status, physical activity and calories consumed.

But researchers said they hoped the study will give women who sleep with artificial light at night a way to improve their health.