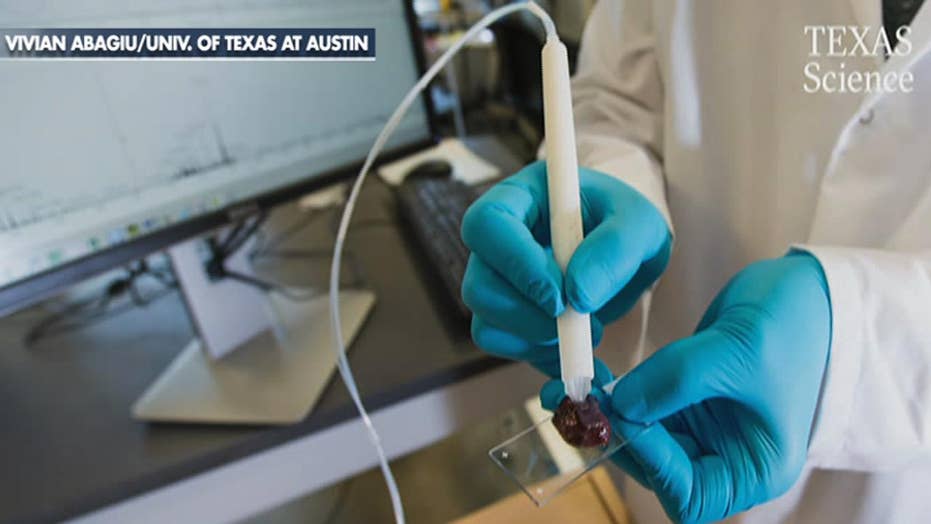 A pen that detects cancer cells in 10 seconds has been developed at the University of Texas at Austin. The new device is aimed at helping surgeons pinpoint cancer cells and more precisely remove malignant tumors

A new handheld device could someday help cancer surgeons figure out what to cut and what to leave alone in real time.

The device, called the MasSpec Pen, is (unsurprisingly) about the size of a pen and employs water, plastic tubing, and a mass spectrometer. It’s the latest in engineers’ efforts to speed up the pace at which samples collected during operations are processed for clinically valuable information.

The device relies on sampling the molecules floating in fluid around cells, which changes depending on a person’s health status. There may be more of one type of protein around breast cancer cells than around healthy cells or thyroid cancer cells, for instance. The MasSpec Pen essentially soaks up those molecules in a few microliters of water held at its tip and then sends that water through a mass spectrometer to identify the molecules. Ten seconds later, the results are back: normal or cancerous, along with information about what kind of cancer it seems to be.

That could help surgeons make decisions more quickly than is now possible. Currently, samples taken during an operation may be sent to a pathologist for analysis. Pathologists can and do analyze samples during operations, but it certainly takes more time than 10 seconds. The pathologists may also be looking at frozen samples — which, in some cases, can affect a pathologist’s ability to provide a clear answer about whether or not they see cancer, said Livia Eberlin, a professor at the University of Texas at Austin. (Overall, she noted the technique was very accurate.) Even other mass spectrometry-based tools require samples to be processed away from the operating room.

And the MasSpec Pen seems to do its job well — at least according to its inventors, who include Eberlin and Jialing Zhang, a research associate in her lab. The device can correctly determine if a human tissue sample is cancerous or not about 93 percent of the time; that figure varies a bit depending on the location and type of tumor. Eberlin, Zhang, and their collaborators tested the pen on samples of human lung, thyroid, breast, and ovarian cancers and in living mice with breast cancer. They published their findings Wednesday in Science Translational Medicine.

This is not the first time researchers have tried to use mass spectrometry in the operating room. A tool called the iKnife uses mass spectrometry to analyze the composition of surgical smoke to determine whether tissue is cancerous or not; some light-based devices that are being developed are very accurate, too. But unlike others tools available, Eberlin noted, the MasSpec Pen is made from biocompatible materials — which makes it a better option for an operating room. The pen also avoids destroying the tissue as it’s analyzing it.

“What’s been developed before has either been for ex vivo tissue analysis, with solvents that are not compatible, or using high pressure nitrogen or high voltage that’s not compatible with living tissue,” she said.

However, this is not a perfect solution. For one thing, the mass spectrometer — which connects to the pen through plastic tubing — is huge. “It takes a lot of space,” Zhang said. “But we are currently getting some data using a smaller mass spectrometer.”

And the device will need to be tested on more samples — and in surgeries — to make sure it’s working as well as it seems. “We’re going to start testing it in surgeries hopefully early next year. That will be a pilot study with our current clinical collaborators. Then we’ll likely have to expand to a larger clinical trial,” Eberlin said.

While biomedical applications are the team’s main focus, researchers said there could be forensic, environmental, or pharmaceutical applications. For example, the pen could collect data on the levels of pesticides on fruits to check if they are within established guidelines, Zhang said.

In the meantime, the team is figuring out how the pen might be commercialized, including looking for potential partners. “The way to make an impact is to go to the commercialization of the device, so we certainly want to explore that path,” Eberlin said.