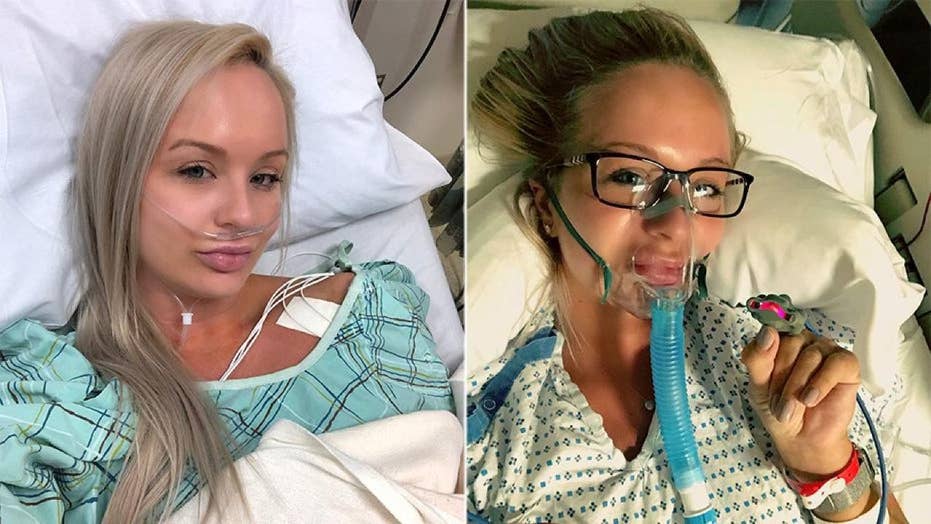 A 25-year-old nurse on New York’s Long Island was fitted with a pacemaker earlier this month after she self-diagnosed her troubling symptoms following a hip injury.

A 25-year-old nurse on New York’s Long Island was fitted with a pacemaker earlier this month after she self-diagnosed her troubling symptoms following a hip injury. Katie Barber said it started with a hip fracture in her teens that began bothering her again in 2018.

“About a year ago, I noticed I was having severe hip pain, and a CT scan revealed I had a torn labrum in my right hip,” she told MDW Features. “My orthopedic surgeon felt that, over time, bone degeneration led to wear and tear injury of my right labrum.”

Barber told the news outlet she underwent an arthroscopic repair and was non-weight bearing for two weeks, but when she began physical therapy she noticed shortness of breath and began to evaluate her own symptoms.

“Being a nurse, I started to wonder if this could be deep vein thrombosis (DVT) or pulmonary embolism (PE),” she told MDW Features. “I never thought something like this would happen to me, but I went to the hospital just to be safe. Well, I’m glad I went because it turns out I had a right leg DVT with bilateral PEs.”

DVT occurs when a blood clot forms in a deep vein in the body, and often is the result of vein damage or slowed blood flow. Risk factors include injury to the lower body, or surgical procedures involving the hip, according to the American Academy of Orthopedic Surgeons (AAOS). If the blood clot travels through the body, it can block blood flow the lungs resulting in pulmonary embolism, which can be fatal. It may also cause permanent damage to the veins, which could result in long-term issues.

Barber said she was diagnosed with a clotting disorder, and a heart condition called junctional rhythm which she discovered after suffering from episodes of dizziness.

“I felt as if I couldn’t get up from my bed,” she told MDW Features. “I was weak and couldn’t stand for more than a few minutes at a time. In September 2018, I went to the hospital and was found to have an abnormal heart rate, later diagnosed as a junctional rhythm. I was kept in the hospital for eight days receiving IVs due to low blood pressure. The next day, I developed chest pain and difficulty breathing. A chest X-ray revealed fluid in my lungs, requiring oxygen for a few days.”

Though Barber tried several medications, her doctors reportedly decided that a pacemaker would be the best course of treatment for her.

“Being 25 years old, I was hesitant to get a pacemaker, but the unpredictability and symptoms associated with this abnormal heart rhythm was significantly affecting my lifestyle,” she told the news outlet.

On Feb. 5, a pacemaker was placed inside Barber’s chest. She said she’s already noticed more energy and the dizzy spells have disappeared.

“As a cardiac ICU nurse, I’m accustomed to seeing patients with pacemakers,” she said. “Most are much older, but there are a fair share of younger patients also needing these devices. It seems that more people without formal training don’t understand the purpose of pacemakers, and more importantly, the normal lifestyle that one can give.”