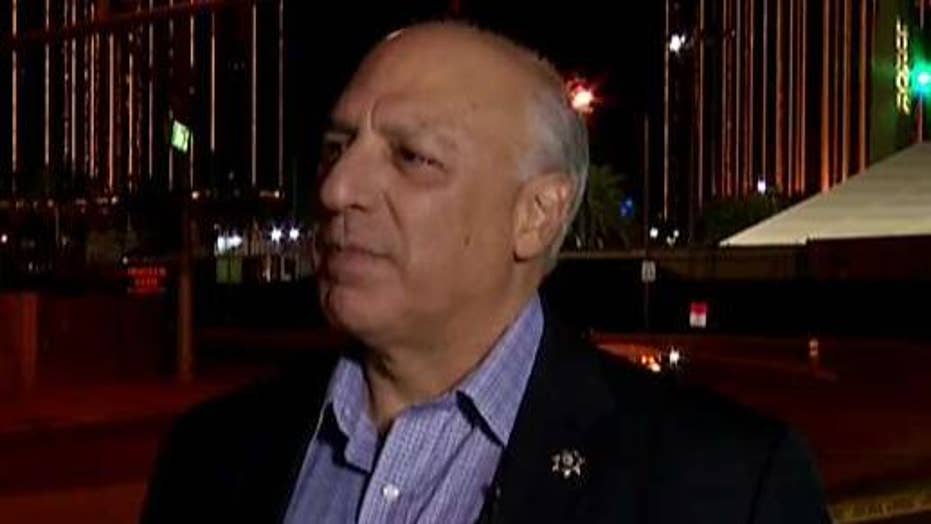 Las Vegas councilman: I am so proud of this city

Councilman and retired police captain provides insight on how the city will recover.

More than 500 victims injured by a gunman who opened fire on concert-goers at Las Vegas’ Route 91 Harvest Festival on Sunday night arrived at nearby hospitals after the massacre, where medics were quickly faced with life-altering scenarios. University Medical Center (UMC) is the only level-one trauma center in Nevada, and turned into “controlled chaos” after being flooded with over 100 patients who arrived in ambulances and witnesses' cars.

“We started divvying them up, taking them to the operating room and doing what’s called ‘damage control surgery,’ where you’re not definitively repairing everything,” Jay Coats, a trauma surgeon at UMC, told USA Today. “You are just stopping the dying.”

Coats said the injuries varied, but that every bed was quickly filled, with patients overflowing into the hallways and even outside the medical center. With the injury count so high, Coats has no recollection of who he operated on.

“It was very clear that the first patient I took back and operated on that this was a high-powered weapon,” he said. “This wasn’t a normal street weapon. This was something that did a lot of damage when it entered the body cavity.”

As a level-one trauma center, the hospital is fully staffed with surgeons and trauma nurses around-the-clock in case disaster strikes. The classification also means UMC participates in two major disaster drills each year, in addition to internal drills. Dr. John Fildes, a trauma surgeon and UMC’s director of trauma and chair of UNLV School of Medicine surgery department, said the center has drilled on a concert venue disaster in the past.

“We trained on this,” he told The Las Vegas Review-Journal. “And it just went off perfectly, on our side. I feel bad for the people that were hurt – I really do. But I’m glad we could help.”

Hospital spokeswoman Danita Cohen said UMC had been in contact with medical staff in Orlando in the aftermath of the Pulse nightclub shooting as part of their training.

“We were able to use that today,” she told the news outlet.

One lesson included moving gurneys and wheelchairs outside to make room for more patients, The New York Times reported. The trauma center quickly called for supplies from other departments of the hospital as patients continued to stream in. Staffers whose shifts had ended or who weren’t scheduled to work stayed on and showed up in droves to help care for patients.

“I’ve been a nurse for 30 years, and this was by far the worst moment I’ve had, the worst injuries,” Toni Mullan, a nurse who returned to UMC after finishing a 12-hour shift in the trauma resuscitation department, told The New York Times. “But it was the proudest moment.”

DURING LAS VEGAS SHOOTING, HEROES RISKED LIVES TO SAVE OTHERS IN 'KILL ZONE'

At Sunrise Hospital and Medical Center, classified as a level-two trauma center, doctors worked through the night to treat 180 victims who were injured, with 14 fatalities. In total, the hospital said it performed about 30 surgeries. A spokeswoman for the Valley Hospital System, which includes Desert Springs, Spring Valley, Henderson, Valley, Summerlin and Centennial Hills, told the news outlet that the network treated 228 total patients. St. Rose Dominican hospitals, which includes three centers, treated 57 patients.

Authorities have said identifying the 59 victims killed after Stephen Paddock opened fire from his Mandalay Bay hotel room on the 32nd floor will be a long process. Families searching for loved ones in connection to Sunday’s massacre are instructed to call 800-536-9488. The Clark County Medical Society said it is working with the Nevada Psychiatric Association to bring on mental health professionals for community members, physicians and other medical professionals.

“We appreciate that there are often acute and long-term mental health effects of such traumatic experiences, and we are working on identifying psychiatrists and other mental health professionals who are available to help those suffering with these effects,” Dr. Leslie Dickson, executive director of Nevada Psychiatric Association, told The Las Vegas Sun.

Medical professionals looking to volunteer are instructed to call 702-739-9989.