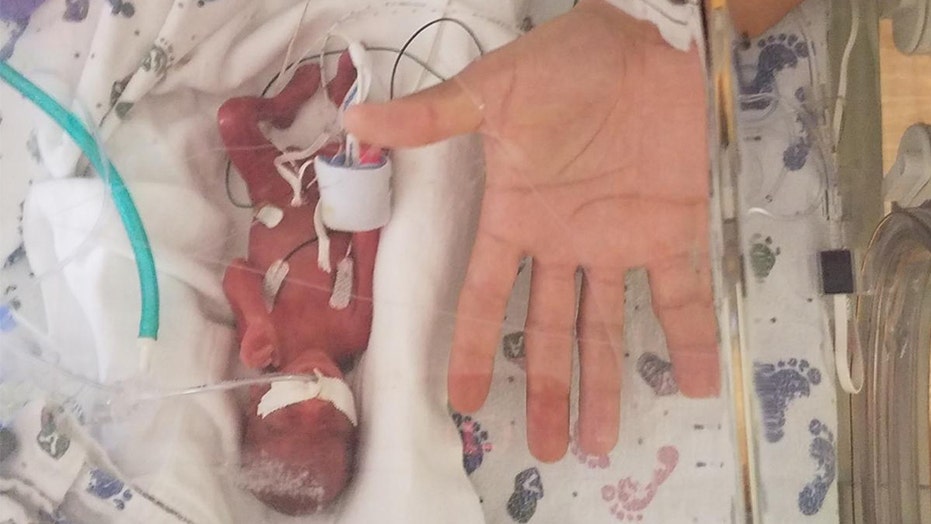 A newborn in Iowa who weighed just 13 ounces when he made his debut at 23 weeks gestation has already been making his parents proud.

“I’m so proud of him,” Ellonn Smartt, Jaden Wesley Morrow’s mother, told KCCI.com. “I go in and talk to him, and I tell him that I’m proud of him every day.”

Smartt said she knew that her son was ready to come out on July 11 when she woke up feeling different. She told the news outlet that about 10 minutes after expressing her concerns to partner Jordan Marrow, her water broke.

His parents haven't been able to hold him yet, but said that doctors have called him a "miracle baby." (GoFundMe)

They rushed to Blank Children’s Hospital where Jaden was born via emergency C-section, reportedly swinging his arms and screaming despite his young gestational age.

Babies born before 37 weeks gestation are considered premature and may have long-term health problems or other issues that require a longer stay in the hospital. About 1 in 10 babies are born prematurely each year in the U.S., according to March of Dimes.

According to the University of Utah Health, babies born before 24 weeks gestation usually have a less than 50 percent chance of survival, and those who do survive have a very high chance of long-term health problems.

“He’s a miracle baby,” his parents were allegedly told, according to KCCI.com.

Smartt and Morrow’s GoFundMe page said the plan is for their son to remain in the hospital’s NICU until his original November due date, but that he was already able to take his mother’s breastmilk at just two days old.

Smartt said that her son’s early birth has taught her that “there’s always a plan, and we learned to be patient. Jaden is here and that’s all that matters.”