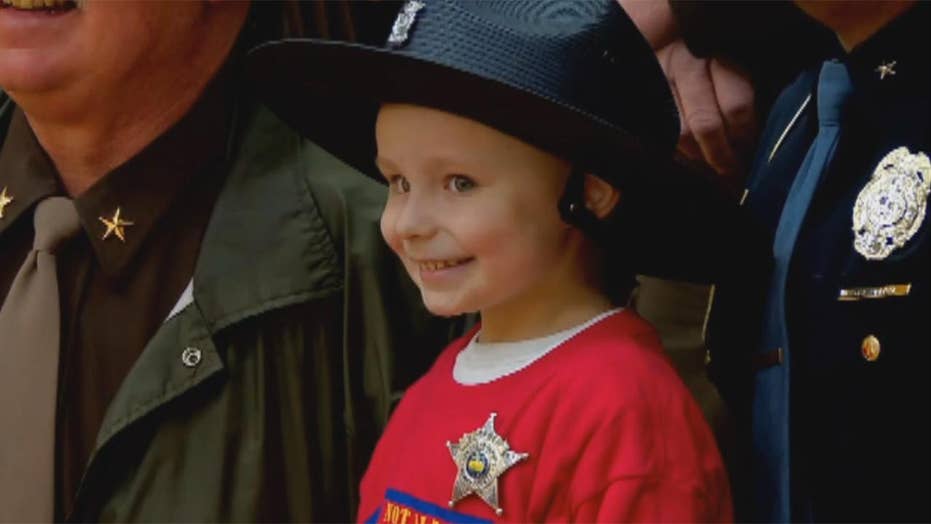 Raw video: Brantley Taber who is battling cancer for a third time and maxed out his lifetime dose of chemotherapy sworn in as honorary sheriff's deputy in Indiana.

A 6-year-old Indiana boy who is battling cancer for the third time got his wish Tuesday when he was sworn in as an honorary sheriff’s deputy.

Brantley was first diagnosed with cancer at age 3 when his parents noticed a lump on his back. According to the family's GoFundMe page, his only treatment option is trial medicine because he maxed out his lifetime doses of chemotherapy.

Henry County Sheriff’s Deputy Derek Bertrand had heard about Brantley’s battle with cancer and found out the youngster wanted to be a law enforcement officer when he grew up. He then hatched a plan to help fulfill Brantley's dream to join the force.

Brantley’s mother, Kira, said she became emotional when she saw the police officers waiting at the school to welcome their newest recruit. The boy was even able to participate in a mock arrest.

"I was not expecting this," the boy's mother said. "I’m fighting back tears walking up and seeing the 50 some police officers that are here and all the police cars outside, it's overwhelming."