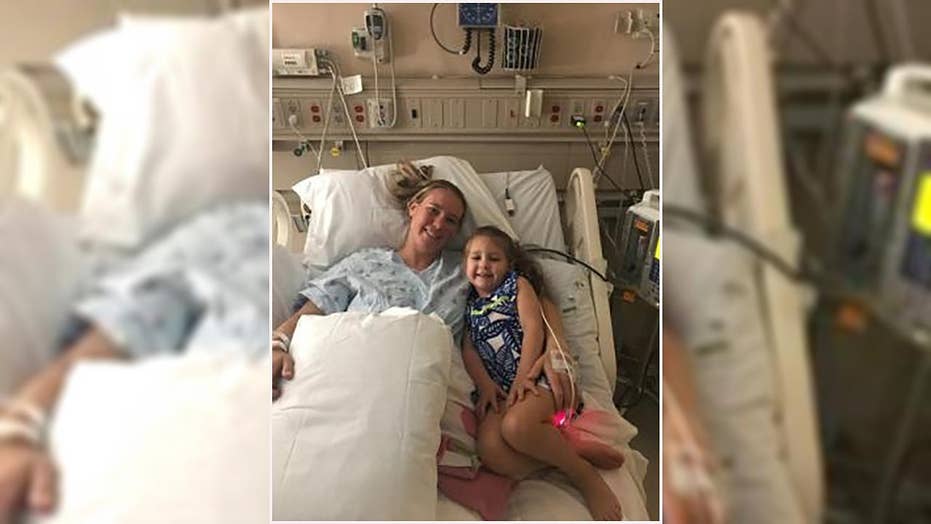 Research shows radon, an odorless gas that can seep into your home, is associated with lung cancer. 33-year-old Olympian Rachael Malmberg shares her story and awareness on how the high levels of radon in her family homes caused her to develop stage 4 lung cancer.

It's the second leading cause of lung cancer. And you don't even know when it's present: radon. It’s an odorless tasteless gas that seeps up through the ground and diffuses into the air—and often times, right into your home.

Rachael Malmberg, a former member of the U.S. Women’s ice hockey Olympic team had no idea her childhood and current home had dangerous levels of radon until it was too late, and she was diagnosed with stage 4 lung cancer.

“It wasn't on my radar at all actually until I started doing research on causes of lung cancer. Upon diagnosis I had no idea about radon,” Malmberg told Fox News.

The 33-year-old mother was a healthy non-smoker who still exercised daily and was training for the military. But when she started experiencing pain in her back and ribs she went to see a doctor and received an MRI. The cancer was in her lungs and had already spread to her lymph nodes and brain.

Radon can enter your house in many ways. The primary method is through the foundation, cracks in the walls or through your water supply. The U.S. Environmental Protection Agency (EPA) estimates that nearly one in 15 homes in the U.S. has a radon level that should be reduced.

While there is no amount of “safe” radon exposure, the EPA recommends anyone with a home with a radon level at or above 4 picocuries per liter (pCi/L) of air should mitigate the problem immediately.

Malmberg’s childhood home radon score was 7.9 pCi/L, and her current home in Minnesota tested at 6.9 pCi/L.

She has since rectified the high levels in her home by having a radon mitigation system installed. She also said she tore up and replaced all the carpeting as well.

When radon is inhaled, radioactive particles can damage the cells that line the lung, and that damage then propagates and creates a malignant cell that starts dividing and causes cancer, Dr. Jorge Gomez, an oncologist at Mount Sinai Hospital in New York City said.

“There was a very recent meta-analysis in 2018 which showed a very clear association between lung cancer and radon exposure that increases as the amount of radon exposure increases,” Gomez, who is also a medical spokesperson for the American Lung Association, told Fox News.

According to the National Institute of Health, around 15,000 to 22,000 lung cancer deaths in the United States each year are related to radon.

Some studies have also linked radon exposure to other cancers like childhood leukemia.

“Radon can also be found in water especially in homes that have well water, so in that case it can sometimes cause gastric cancer,” Gomez said.

Although most research has been inconclusive about how long someone would have to be exposed to radon for it to cause lung cancer, Gomez believes you would need long term exposure because of how small the amount of gas typically is.

“You need a long term exposure -- probably five years to get lung cancer,” he said.

To lower radon levels in your home the EPA recommends a process called soil suction that prevents the entry of radon by drawing the radon from below the home and venting it through a pipe to the air above your home. If your hire a contractor they can design a specific system for your home that could include soil suction or other radon reduction methods like sealing cracks and other openings in the foundation, house or room pressurization which uses fans to blow air around specific areas in the house to create enough pressure at the lowest level indoors. Or they might suggest a heat recovery ventilator to increase ventilation and help reduce the radon levels in your home.

Treatments for lung cancer have improved immensely over the years, Gomez said. Malmberg was lucky enough to receive treatment that has left her with no evidence of cancer for the last16 months.

“Lung cancer is probably the cancer where we’ve had the highest number of new treatments in the past five to ten years,” Gomez said.

In 2017, Malmberg underwent a partial lung removal that included a removal of 22 lymph nodes and went through almost three hours of stereotactic brain radiation.

Malmberg’s doctors have been tracking a small spot in her brain since February, 2018, which they decided not to do any additional radiation or treatment on, as they are thinking and praying that it is only scar tissue.

She continues to undergo targeted therapy to keep her cancer at bay, something she said has allowed her to live a “normal life and continue to work and be a mom.”

In addition to targeted therapies, which work by attacking cells that have a specific genetic target, immunotherapies have proven very effective in the treatment of lung cancer as well.

“We're getting new immunotherapies approved by the FDA a few times a year now,” Gomez said. “There are many, many immunotherapy drugs currently being tested that may end up being very effective.”

Beyond treatment, the number one way to prevent radon from causing lung cancer is to get your home tested regularly, Gomez said.

“There are simple kits that you can use in your own basement that will tell you if there is a significant level and there are professional services that can test your home as well,” Gomez said.

Malmberg has also teamed up with a company called Airthings to raise awareness about radon testing and why it’s such a vital and preventative test everyone should have done.

“Now, I use the Airthings Wave for everyday testing to ensure continued safety and have an annual test conducted in the home to serve as an additional measure,” she said.