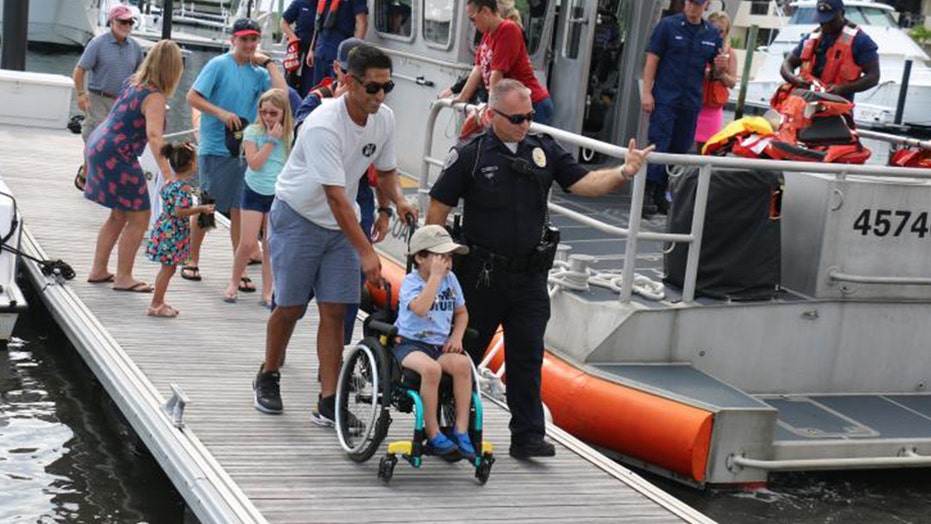 A 5-year-old Florida boy who is battling an aggressive form of brain cancer got to live his dream last week when the Coast Guard, Customs and Border Protection (CBP) and several local law enforcement teams joined forces so he could be an honorary marine officer and go on a ride with the military branch.

Her son was found to have anaplastic ependymoma stage 4 brain cancer when he was 2 years old, and it spread to his spine, according to WPTV. He has undergone seven brain operations and 66 rounds of radiation, Koors told the news station; chemotherapy stopped working, so she stopped his treatment.

"I just want Giovanni to be happy. That's all I want," said Koors, who is expecting her third child.

Giovanni said he wanted to spend a day with the professionals who protect South Florida's coastal waters, according to CBP.

Giovanni Bacon, who is battling aggressive brain cancer, got to ride with the Coast Guard on Oct. 9. (Customs and Border Protection)

The Coast Guard and Air and Marine Operations West Palm Beach Marine Unit teamed up with several at least a half dozen local law enforcement teams to give Giovanni a tour around the Intracoastal Waterway and the Atlantic Ocean on Oct. 9. More than a half-dozen vessels participated in the joint patrol, CBP said.

“We are a part of communities across the state of Florida, and it is a privilege and an honor that Air and Marine Operations had an opportunity to participate alongside Homeland Security partners,” said Hector Rojas, deputy director of marine operations at the Miami Air and Marine Branch. "Boosting the spirits of this young boy with dozens of community partners is just another reminder that Air and Marine Operations is a federal law enforcement organization dedicated to serving and protecting the American people."

“The extraordinary courage and strength displayed by this boy facing brain cancer is something for us all to admire," said Miami Air and Marine Branch Director Martin Wade. “The spirit of service and the outpouring of support is a testament to the teams of teams that work together safeguarding the homeland every day.”

"I would never wish this on anyone ever," Koors told WPTV. "That’s my first-born baby and I need him. I need a miracle."

"I trust God's plan for my son, and I just go with that. I want everyone in the whole entire universe to pray for my son."