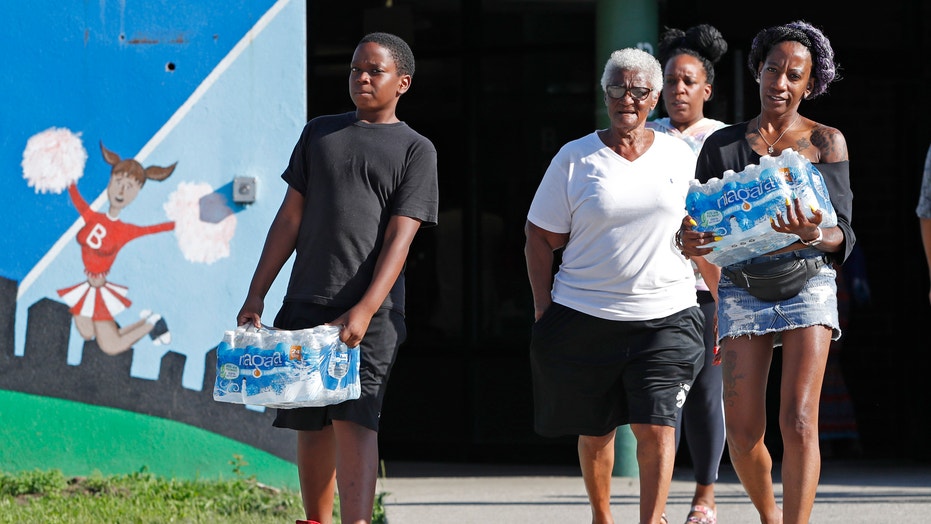 Just over a year ago, Newark officials declared the city's water was "absolutely safe to drink," but last week environmental officials called on the city to advise residents with known or suspected lead service lines that the filters they had been provided were not reliable after elevated lead levels were discovered in two Newark homes.

For three years the New Jersey city has been mired in a crisis caused by high levels of lead in the drinking water. The water filter program meant to answer the call for safer water has failed to solve the problem.

Now, in a move that echoes Flint, Mich., the city is distributing bottled water.

City residents line up at the Boylan Street Recreation Center with cases of bottled water, on Monday, Aug. 12, 2019, in Newark, N.J. (AP)

According to the CDC's Childhood Lead Poisoning Prevention Program, lead exposure is devastating. Lead serves no purpose in the human body and there is no safe level of lead in drinking water. Children are especially at risk of its deadly effects. Early exposure can have lifelong consequences, such as intellectual disabilities, the agency says.

According to the  U.S. Environmental Protection Agency's (EPA) letter, the agency is “unable at this time to assure Newark residents that their health is fully protected when drinking tap water filtered through these devices.”

The EPA places the onus to provide bottled water to Newark residents on the city.

New Jersey Gov. Phil Murphy said in a joint statement with Newark Mayor Ras Baraka that he is prepared to make bottled water available to residents. He further stated that Newark is expanding the testing of filtered drinking water to more Newark homes and that the New Jersey Department of Environmental Protection is “working with the filter manufacturer to determine the scope of the situation.”

The city handed out nearly 40,000 PUR water filters, half of which were donated by the company. In a statement, PUR said it has been “working diligently with the City of Newark to understand the situation, assist with the establishment of testing protocols for additional sampling, and help them determine next steps.” PUR says its faucet filters are “independently tested and certified by NSF International (NSF) to remove 99 percent of lead at levels up to 10 times the applicable federal and state drinking water standard of 15 parts per billion (ppb).”

Erik Olson, senior director of health programs at Natural Resources Defense Council (NRDC), is “troubled” by these developments. NRDC, an environmental group, sued Newark last year for failing to comply with regulations for the control of lead in drinking water.

“Everyone in Newark deserves safe drinking water,” Olson said, in a statement. “We welcome EPA’s recent letter stating that Newark residents with lead service lines should be provided bottled water, though we do not understand why EPA does not insist on protecting other at-risk people such as those with lead plumbing and whose water tests high for lead. We also continue to be concerned about risks to residents in the eastern part of the City, the Wanaque service area.”

Recent EPA tests showed elevated levels of lead in the drinking water in some areas of Newark, despite filters that had been distributed earlier.  (AP)

The bottled water distribution targets families served by the Pequannock water system with lead service lines who have received filters. Other Newark residents are served by the Wanaque water system, which was not prioritized for filters.

Newark does not know why the filters are failing, but one resident is not surprised by the turn of events.

“We’ve been telling them this for the last two years, but we were looked at as crazy,” said Debra Salters, a member of advocacy group Newark Water Coalition.

“We told [city officials] to give out bottled water and now they’re talking about they’re only giving out two cases. That’ll be gone by the end of the night," she said.

According to Salters, residents must show two forms of identification to collect water. She believes that complicates an already alarming situation.

“You couldn’t listen to the residents who pay your salary. You had to wait until the federal government put their foot on your neck and made you do something,” Salters said. “This is a life crisis.”

A reduction of lead levels is expected by the end of this year as stated in Murphy’s and Baraka’s statement. They are “optimistic” that the new corrosion control treatment will “prevent leaching from lead pipes.”