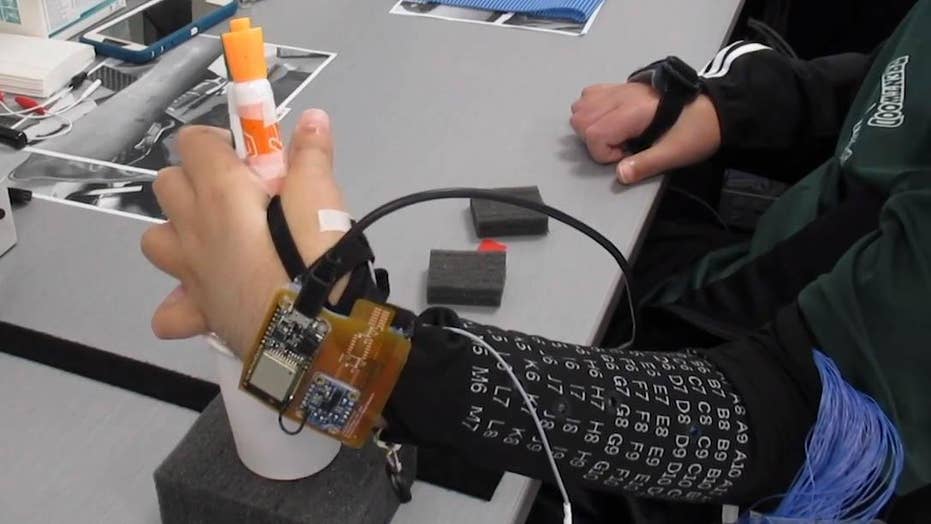 Chad Bouton, the VP of Advanced Engineering at the Feinstein Institute of Bioelectric Medicine, reveals new cutting-edge technology in a wearable electrode sleeve that may help paralysis victims and quadriplegics across the United States regain movement.

Cutting-edge technology is giving new hope to millions of people living with paralysis across the United States. Researchers at The Feinstein Institutes for Medical Research have successfully developed a light-weight, wearable electrode sleeve that regulates and triggers finger movement in quadriplegics.

The lead researcher, Chad Bouton, said his team developed the sleeve after they determined there was brain activity in motor areas years after severe injuries. The team realized that there was a way to stimulate the arm and isolate individual finger movements.

“This has been a very difficult problem in the world of rehabilitating folks living with paralysis after a stroke or a spinal cord injury,” Bouton told Fox News. “The hand is one of the most challenging areas of the body to rehabilitate because of that fine movement and all of the types of intricate motions the fingers in hand can do.”

The unique way in which Bouton’s team learned to stimulate muscles led to the development of a wearable sleeve that patients could use every day. The sleeve allows for refined motor movement, and all of the actions are completed by the participants’ own volition. That means the sleeve picks up the muscle’s attempt to motion and then stimulates, over the skin, to help with the movement and complete the task.

Casey Ellin, 32, became one of the first patients to test out the sleeve.

“I went into the study with no expectations,” Ellin said. “At first when I tried it, I felt like I was in some sort of sci-fi movie getting an upgrade, but I didn’t want to get my hopes up. I went in thinking that what we are doing at the study could benefit so many people in the future.”

Ellin suffered a cervical spinal cord injury in June 2013 while diving in the ocean at Jones Beach. Doctors diagnosed him with having a C5 spinal cord injury, which meant he had substantial motor and sensory limitations.

Bouton told Fox News that Ellin has been able to make great strides with the sleeve.

“Casey’s been able to wear the sleeve and use it to pick up things, like a granola bar, and then feed himself, and these types of accomplishments are very, very important," he said.

Ellin said he believes that this type of invention has the potential to open many doors for the disabled community.

“Being able to have the use of one’s hands, even in a limited capacity would be a game-changer,” Ellin said. “Studies like this give me a lot of hope for the future, I think this is just the tip of the iceberg.”

Bouton echoed Ellin’s optimism for the future of paralysis patients.

“If you have a wearable form of this type of stimulation, these types of electrodes, you can wear it not only on the upper limb, but also the lower limb,” Bouton said. “And we are working with folks to explore that, and we hope in the future to potentially even help people regain leg movement and maybe one day even walking.”