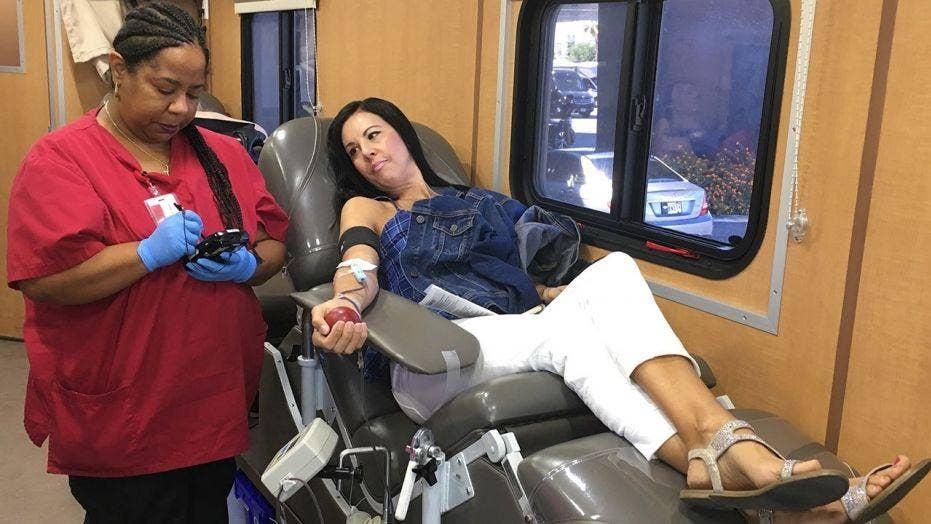 Donors continue to line up to give blood in Las Vegas

Four days after the nation’s worst mass shooting in modern history that killed 58 people in Las Vegas, blood donation lines are not receding as hundreds of people line up to give. Red Cross officials have said they have received enough units in proportion to the tragedy.

“When a tragedy like this happens people want to do something, and that is something that’s very easy for most people to do, but we ask people to look at their calendars for the next two to three weeks…make that appointment,” Tony Briggs, a spokesperson for the American Red Cross, told Fox News.

The American Red Cross of southern Nevada said they have sent 450 units of blood to 10 of the 14 area hospitals that they serve. Some people have waited up to 10 hours to give while others have been trying since Monday to make an appointment.

“Since Monday I’ve been trying to donate blood…the lines were massive, went on their websites, tried to schedule appointments and for every single date for the entire week it’s just been booked," Carlos Aguilar, a Las Vegas resident, told Fox News.

Stockpiles of units of blood are immediately distributed in the wake of a tragedy like this shooting, Briggs said. Most of the blood already on the shelf that people donated two to three weeks ago went out to people who need it right now. The thousands waiting in lines are to replenish that stock and keep the blood flowing in the weeks ahead.

Usually during the summer months, the Red Cross experiences a slowdown in people available to give. According to officials from the organization, about two weeks before the shooting there was a shortage and they sent out an appeal for donors.

Many of those donating are doing so for the first time in the wake of the shooting.

“I think the event [the shooting] has prompted me more to show support,” Genesis Contreras, a nurse who was donating the first time, said.

Kimberly Brock also gave for the first time and said she’s glad she finally was able to do it because she couldn’t wait eight hours on Monday.

Red Cross officials were reluctant to give an estimate about how many units had been donated from how many people so far due to the fact that it is constantly changing.

Many in the community have been trying to find a way to help in response to the shooting.

Companies like Station Casinos and Boyd gaming are offering free hotel rooms at their properties for families of victims and Las Vegas based airline, Allegiant is offering free flights for relatives of those affected.

Aguilar, a former New York City resident, said it reminds him of the response after the 9/11 terror attacks.

“When you see something tragic, it’s important that we all kind of contribute one way or another," he said.