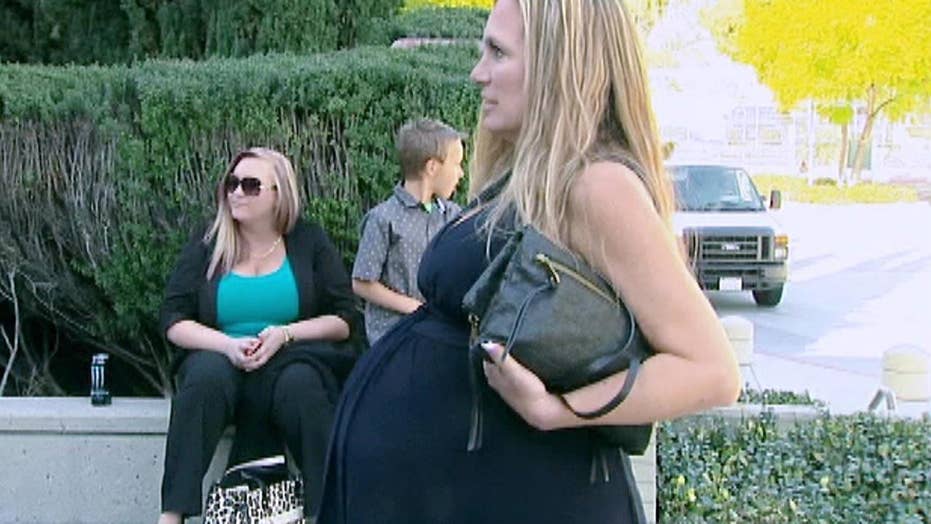 Father of the children claimed he could not afford triplets

A set of newborn triplets are now being tended to in a California hospital, unaware of their place at the center of a complex legal battle that could have huge implications for surrogacy and parental rights.

The babies were delivered several weeks premature Monday night, according to a lawyer for Melissa Cook, the 47-year-old surrogate mother from Woodland Hills who refused the biological father’s demands that she have an abortion. That man, a deaf, 50-year-old postal worker from Georgia identified in court papers as “C.M.,” paid Cook to carry anonymously donated eggs he fertilized in the hopes of having children. But Cook, who describes herself as pro-life, refused to have an abortion, and is seeking parental rights.

"I'm healthy, I'm 28 weeks pregnant, the babies are doing great, the three little boys I have inside me," Cook told Fox News outside court earlier this month before they were born.

"You can doctor this up, you can play word games with it, but this is simply and purely the sale of a child."

In California, a gestational surrogate – a woman who carries a donor’s eggs - has no parental rights, but Cook is challenging the state's surrogacy law in federal court, claiming it is unconstitutional.

"It's an attempt to reduce women to an object, or a breeding animal," charges Cook's lawyer, Harold Cassidy, a nationally prominent pro-life and anti-surrogacy lawyer who is calling for a moratorium on surrogacy.

"You can doctor this up, you can play word games with it, but this is simply and purely the sale of a child," he added.

Cassidy told Fox News that the minute the babies were born, they were immediately taken from Cook because a state court judge had granted the father parental rights, a ruling Cassidy is appealing.

"The hospital personnel refused to let Melissa see the children, allow her to know what their condition is, refused to tell her their exact weights, and she is not being permitted to see the children at all," Cassidy said. "We have a mother who loves them, who fought for them, who defended their life, who stands ready to take care of them. You can't tell a mother who gives birth to children that what happens to the children is none of her business."

Court documents reveal correspondence involving Cook and C.M., including a Sept. 18, 2015 message the father wrote to his attorney to say visits to a fertility clinic by Cook, whose pregnancy was deemed high-risk due to her age, were "draining my finances."

"I do not want to abort twin babies, but I felt that is such possible (sic) to seek aborting all three babies,” he wrote. “I do not want to affect Melissa’s health. I do not have any more money in the bank, and my job does not pay great bi-weekly."

Cook’s lawsuit says that, “C.M. depleted his life savings paying for the infertility doctors, paying the surrogacy broker, paying the anonymous ova donor, paying the lawyers and putting money into trust for the surrogate," prompting “his demand that Melissa have an abortion because he could not financially afford the children and was otherwise incapable of raising the children."

Surrogacy contracts typically allow for what is known “selective reduction,” where an embryo or fetus can be aborted, usually for medical reasons. The contract in this case was not made available to Fox News.

Last Nov. 24, according to the lawsuit, C.M. wrote: "My decision made is, requires a selection reduction (sic). I am so sorry."

Cook, who was hired through Santa Barbara-based Surrogacy International, claims that she was threatened with legal and financial damages if she refused to undergo the procedure.

Robert Walmsley, co-owner of Surrogacy International, which is not named in the federal lawsuit, has reportedly said that Cook was asked to only abort one fetus because doctors were concerned about possible abnormalities. Walmsley, who is also C.M.’s lawyer, declined an interview request from Fox News, citing his client's and Cook's privacy. He issued a statement on behalf of C.M. in which the biological father vowed not to discuss the case publicly out of concern for parties involved, including the three children.

C.M. said in the statement he thinks it would be inappropriate to discuss the issues “outside the judicial process.”

"My interest is in protecting my three children,” the statement added. “I continue to have concern for the health and welfare of the surrogate and wish to avoid her having unnecessary stress through a public presentation. I have no interest in sensationalizing the situation."

Cassidy has spent decades challenging abortion and surrogacy laws across the country.

He represented surrogate mother Mary Beth Whitehead, in the landmark 1987 New Jersey court case known as "Baby M," which ultimately invalidated surrogacy laws in that state. Whitehead had been inseminated with the sperm of the intended father, but then refused to give up the infant. The parents, William and Elizabeth Stern, were given custody of the baby girl and Whitehead was granted visiting rights. "Baby M" grew up to be the now 29-year-old Melissa Stern, who is married with her own children.

According to the Creative Family Connections law firm in Maryland, 33 states allow some form of surrogacy, and the practice has given countless parents children.

The American Society for Reproductive Medicine estimates that about 1,600 babies are born each year in the United States through gestational surrogacy, such as Cook's.

But Cassidy notes that surrogacy has been outlawed in most of Europe and Canada. While he acknowledges the blessings of the results for many desperate parents, he believes that "the focus is wrong" and belongs on the children.

"Some man who donates sperm on the other side of the country is a stranger to that child, so much so that it is nothing for him to demand that the mother who loves the children he's carrying has to kill one of them,” he said. “So his focus was not on the children, his focus was on what he wanted, what he could do, what he was capable of without any regard for what's best for the children. And quite frankly, for a state to pass a statute that says the children should be turned over to someone who admits that he cannot care for the children is not good at all, and by the way, the way it's written, it is not constitutional."

This is the second time that Cook served as a surrogate mother, she did so three years ago. She is seeking in court to be declared the legal mother of the infants, and Cassidy says that she is prepared to care for one or all of the babies if C.M., the father, cannot.

"I want what's best for them," Cook said outside court on Feb. 8. "These court proceedings are for them, to determine what is going to be in their best interest."

The Los Angeles County Health Department, which is named in the federal suit, did not respond to Fox News' request for comment.

Jen Oliva contributed to this report.