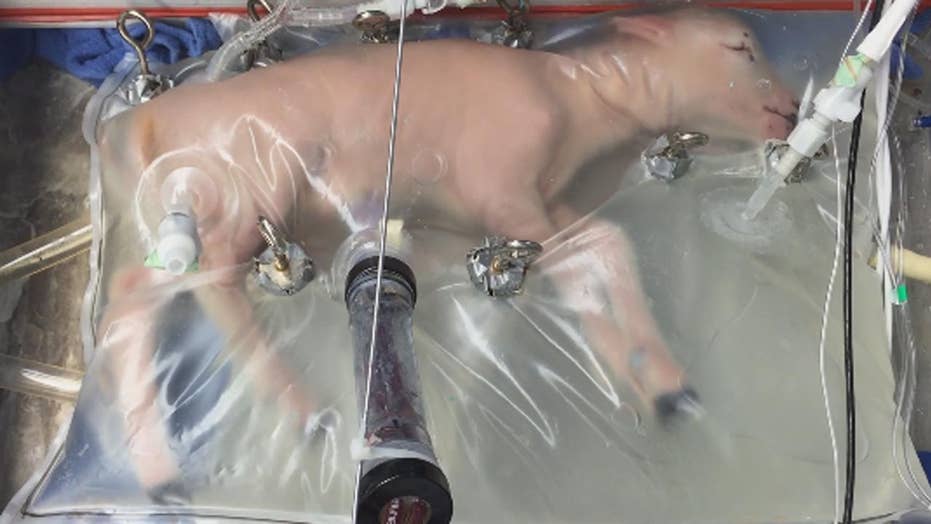 The womb, called a “biobag,” is a plastic bag filled with fluid to mimic the conditions inside of a uterus. A baby born too early could spend a few weeks in the bag, where tubes from their umbilical cord to an external device would provide oxygen to their blood. After that, the baby would be taken out of the bag and hooked up to a mechanical ventilator, which would help them breathe until they develop sufficiently to breathe on their own.

The technology could someday better support infants born in the middle of the second trimester, as early as 22 or 23 weeks into the pregnancy. Currently, babies born so early have a low chance of surviving — about 50 percent — and the devices that keep them alive can also cause severe and permanent damage.

Dr. Alan Flake, a pediatric and fetal surgeon at the Children’s Hospital of Philadelphia, tested different version of the biobag on prematurely born lambs, the results of which are described this week in Nature Communications.

In the most advanced version of the device, lambs that couldn’t live on their own outside of their mother survived for up to four weeks in the bags. After they were “delivered,” their lungs functioned well — similar to normal lambs of their age, Flake said.

“The duration of support is outstanding,” said Dr. George Mychaliska, a pediatric and fetal surgeon at C.S. Mott Children’s Hospital, who has spent the past 10 years researching similar systems, and was not involved in this study. He was able to keep extremely premature lambs alive for one week in a published study, and two weeks in as-of-yet unpublished research.

None of these artificial uterine environments are available to babies in the clinic, and human trials on a device are at least three years away, the scientists estimate.

A promising, but tricky, technique

Right now, the prospects for extremely premature babies are grim. The best available treatment for babies born with underdeveloped lungs is to put them on a ventilator — a mechanical device that pushes oxygen into their lungs — but those are far from ideal.

“We know that even a few hours of that damages the lungs of a 24-week infant,” Mychaliska said. “Our hands are tied, because in the absence of that, the baby would die. So we accept some lung damage to keep the baby alive.”

By contrast, environments that imitate the inside of a uterus continue delivering oxygen to the fetus via the umbilical cord, or directly into the arteries, which could avoid the lung damage.

But challenges have been numerous. It’s difficult to stick tubes into the umbilical cords because they shrink when they are exposed to oxygen or perturbed. Artificial uteri can also easily become contaminated with infections, and the fetal heart is weak and sometimes can’t handle artificial pumping of blood.

In tests on sheep, Flake first slits open the uterus as if he were performing a caesarean section. Then, he connects an artificial blood-circulation system to the ends of the umbilical cord. Finally, he takes out the tiny lamb, umbilical cord included, and places it into the biobag, which is filled with a brew of electrolytes. The entire process takes about two minutes, he said.

In the most advanced device tested in Flake’s study, eight lamb fetuses spent three to four weeks in personal biobags. Then they were taken out of the bags and placed on mechanical ventilators for about 12 hours before being euthanized for study, Flake said. (Some lambs were kept alive longer, but are not part of this study.)

The lambs were killed quickly because the intention of this study was to determine how the lambs developed in the biobag, and Flake didn’t want the lambs to grow too much out in the real world.

Whether such an approach would work for human infants — and whether parents would accept it — remains an open question.

Some wonder whether the optics of a baby in a bag might scare off parents.

Co-first author Dr. Emily Partridge, a research fellow at the Children’s Hospital of Philadelphia, acknowledged the concern, but said that even though it might look weird, the medical care that infants would be getting in these biobags would be a vast improvement over currently available technology.

Flake’s team has patented the device and is in consultation with the Food and Drug Administration to plan a preclinical trial in animals as a prelude to doing a trial in humans. The device that Flake plans to use for that trial is similar to the device discussed in the Nature Communications paper, but not exactly the same. He said that the next animal study should be done in two or three years, and a human trial should start in three years.

Read more: Giving newborns medicine is a dangerous guessing game. Can we make it safer?

And lambs aren’t a perfect model for humans. Specifically, at the equivalent stage of development, humans are much smaller, and their brains are less well-developed. None of the lambs incubated in the biobag experienced bleeding in the brain — but it might still happen in humans, causing brain damage or death.

No human infants have yet developed in these sorts of artificial uteri. But many lambs have. And at least one has lived to tell the tale.

It’s known in Flake’s paper only as “long-term survivor,” and spent 25 days gestating in an earlier version of the biobag, which resembled a large tank. Flake said that one of the researchers in his group developed an emotional attachment to the lamb, so a decision was made to donate the lamb to a farm. Flake declined to disclose the lamb’s new home, and stressed that the long-term survival of the research subjects was not the purpose of the study.

But somewhere in the fields of Pennsylvania, a biobag-grown lamb is gamboling among its wild cousins — a futuristic thought indeed.