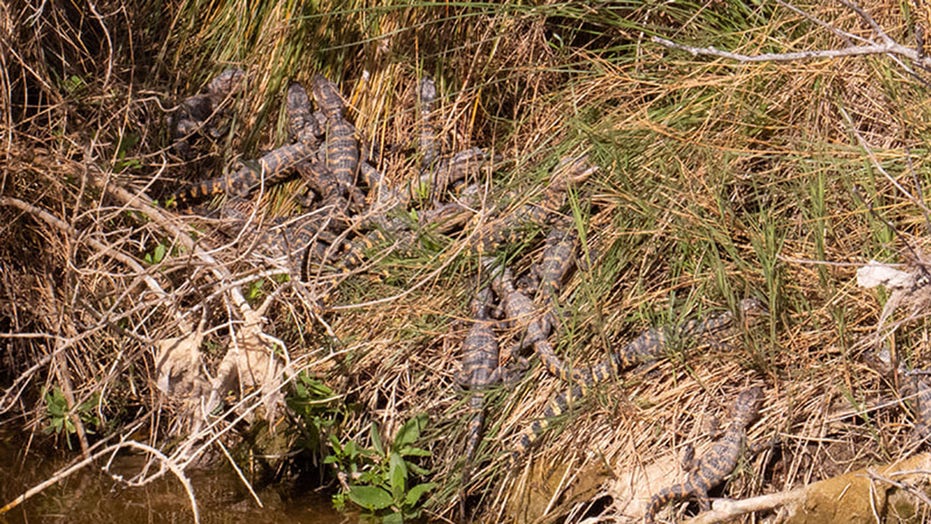 Alligators are much less threatening when they're still babies.

A worker at a Texas wildlife refuge snapped a photo of 20 baby alligators sitting in the tall grass near a river's edge. Despite their young age, officials still recommended that people keep their distance, as the mother was likely somewhere close by.

The Aransas National Wildlife Refuge shared a photo of the babies to Facebook. According to the refuge, the small animals probably hatched sometime last year.

Since alligators stay with their moms until they turn about 2-years-old, it's likely that the larger adult was somewhere nearby.

"One of our volunteers spotted about 20 baby alligators while hiking the Heron Flats Trail this weekend," the refuge wrote. "These little ones probably hatched last year. Baby alligators typically stay with their mother for up to two years."

While the babies are cute-looking, this image also serves as a reminder that people who live in areas with alligators should be careful, especially as the weather warms up.

Fox News previously reported that Faniel Duplantier was watching alligators in a canal in Louisiana last Saturday when he heard a small child calling for help. Considering the alligators in the water, he knew that he had to act quickly.

According to the Westwego Fire Department, Duplantier successfully pulled a 5-year-old boy from the water. Rescue crews then helped bring the child safely back across the canal, where he was treated by EMTs.

The Westwego Fire Department posted about the incident on Facebook, writing, "Spring is upon us and Summer is near, keep a close eye on children around waterways and swimming pools."

The fire department also reminded people that it's important to always be aware of where alligators live.