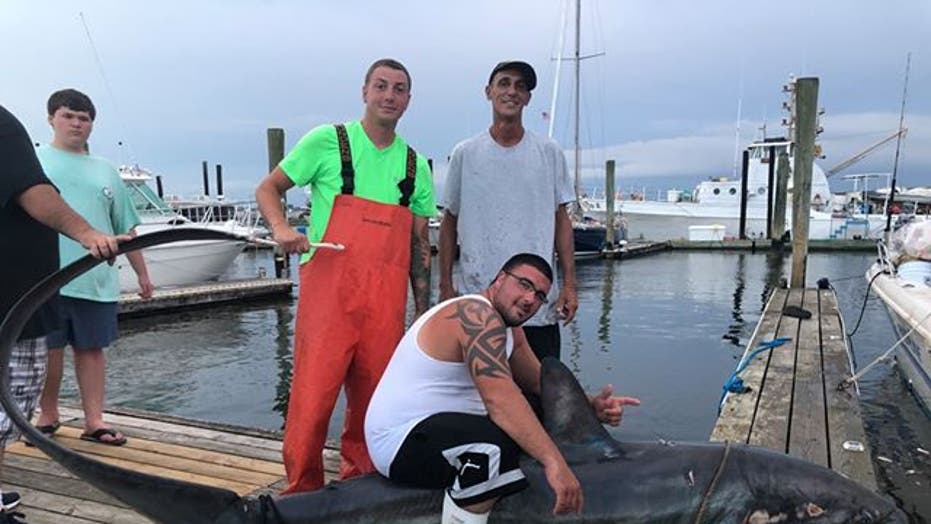 It was a great day for the Staten Island Fishing Club.

On Sunday, three members of the angling group made the “catch of a lifetime” when they reeled in a 510-pound Thresher shark measuring nearly 8 feet long off the coast of New Jersey.

Friends Joseph Egitto, Pat Salvato and Frank Pomponio have been avid fishermen “for years,” jetting out to try their luck in the waters of Sandy Hook and Raritan Bay as many as six days a week, Patch Media reports.

Friends Joseph Egitto, Pat Salvato and Frank Pomponio made the “catch of a lifetime” when they reeled in a 510-pound Thresher shark measuring nearly 8 feet long off the coast of New Jersey on Sunday. (Courtesy of the Staten Island Fishing Club)

"We try to fish every day that it's nice, every weekend and usually five to six times a week," Egitto told the outlet.

Nevertheless, the Staten Island trio never expected that they would nab such a massive catch in their usual stomping grounds.

FISH WITH 'TWO MOUTHS' SHOCKS ANGLERS: 'IT’S A CATCH OF A LIFETIME'

The men departed from Tottenville early in the morning of Aug. 18, stopping at Dockside Bait and Tackle in Sewaren and purchasing bunker fish as chum.

Egitto, 27, Salvato, 42 and Pomponio, 25, then drove the small boat to a fishing point fittingly known as “Monster Lodge,” 30 miles east into the Atlantic Ocean off the coast of Sandy Hook, Patch reports.

The angling trio never expected that they would nab such a massive catch in their usual stomping grounds. (Courtesy of the Staten Island Fishing Club)

According to the outlet, Monster Lodge marks an undersea drop-off where the seafloor plummets – making it an ideal site to catch large fish and sharks.

Around noon, the monstrous shark finally bit – and the three-hour challenge of reeling it in began. The shark reportedly rocked the boat as the men, strapped into a harness for safety, took turns with their hand at the rod in a fierce battle of “man versus beast.”

"I feel like I've aged 20 years just fighting that thing,” Egitto, who owned the boat, said. “It took three grown men taking turns to fight that shark. It's literally man versus beast."

Eventually, the anglers were able to pull in the shark. However, the sea creature was far too big to fit into the boat, so the crew tied it to the side of their vessel and steered slowly back to the bait shop.

Arriving three hours later, Egitto, Salvato and Pomponio again jumped into action to tie and hoist the shark to land with ropes, measure the beast and take requisite photos with their unbelievable catch, according to the outlet.

“We needed everyone on this boat; teamwork made it happen,” Egitto said. "We wouldn’t have any of these sharks without teamwork.”

“We needed everyone on this boat; teamwork made it happen,” Joseph Egitto said. "We wouldn’t have any of these sharks without teamwork.” (Courtesy of the Staten Island Fishing Club)

The boat owner admitted he has already filleted the shark, sharing it with family and friends.

"Yes, I do feel bad killing it and if we catch another one and it's not bigger than 500 pounds we will let him go," Egitto told Patch, insisting that the catch "won't go to waste."

"I really do try to eat everything I catch and I eat a lot of shark," he said.

Thresher sharks are known as quick swimmers with small mouths, long caudal fins and timid dispositions, according to the Florida Museum of Natural History. They are found in temperate and tropical oceans all over the world.