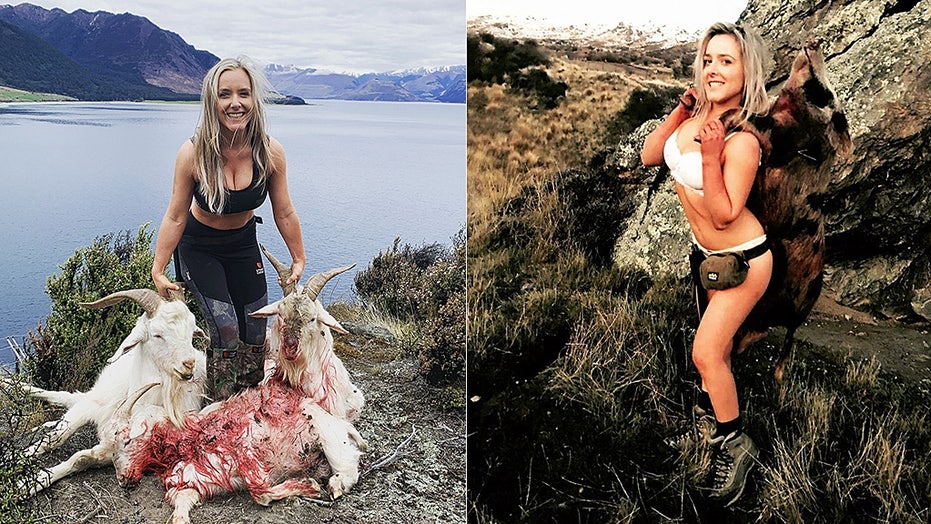 Not everyone is a fan of this mom’s lifestyle.

A mother of three from New Zealand claims she has faced death threats for sharing pictures of her hunting trips, which often show her carrying an animal's carcass following a hunt. However, the woman, 29, says she and her family eat the animals they hunt because they're opposed to eating meat from a factory farm.

Lucy Rose Jaine first started hunting when she met her partner, The Sun reports. Since then, she’s fallen in love with the outdoors. She and her family go hunting about five to eight times per month.

They mainly hunt wild pigs, but they’ll also hunt deer, goats, wallabies and other animals. She uses the animals that she kills to feed her family, explaining that she prefers not to rely on factory-farmed meat.

“I like that we can teach our children how to hunt their own food,” she told The Sun.

"Some guy just said, ‘I hope you die,’" she claimed. "I obviously didn’t respond. I hope he finds happiness." (Media Drum World)

She explained that “hunting wild meat is ideal, organic and sustainable” and said that, in contrast with animals being raised on factory farms, the animals she hunts are “living a good life."

She and her family mainly hunt pigs, which also helps local farmers deal with their pig problems, she claimed.

"It’s free, it’s fun and it helps the farmers," she said.

Jaine typically shares pictures of her hunting trips on Instagram, where she says she receives support from other outdoor enthusiasts. Unfortunately, that’s not all she receives.

”I’ve had a few death threats from people who just don’t have any experience with hunting,” she said. “Or maybe they are against animal cruelty. But I don’t take it to heart. I just tell myself, ‘That person must be going through something in their own life and I can’t judge what I don’t understand.'

"We make sure we respect the animal in the process.”

Critics also seem to take issue with the photographs Jaine posts, which often show her carrying her kills after a successful hunt.

"Imagine posing with the animals you’ve just slaughtered," one commenter wrote underneath a photo of Jaine carrying a wild pig. "Pls can someone do this to her children?"

"Nothing funny about posing with dead animals," said another. This is why you receive hate, the kill shots, there's just no need for them, and perhaps don't go running to the papers crying about it too!"

Jaine, meanwhile, said she simply tries to turn the other cheek.

“Some guy just said, ‘I hope you die.’ I obviously didn’t respond. I hope he finds happiness. Be kind, everyone on this earth is especially doing their best.”