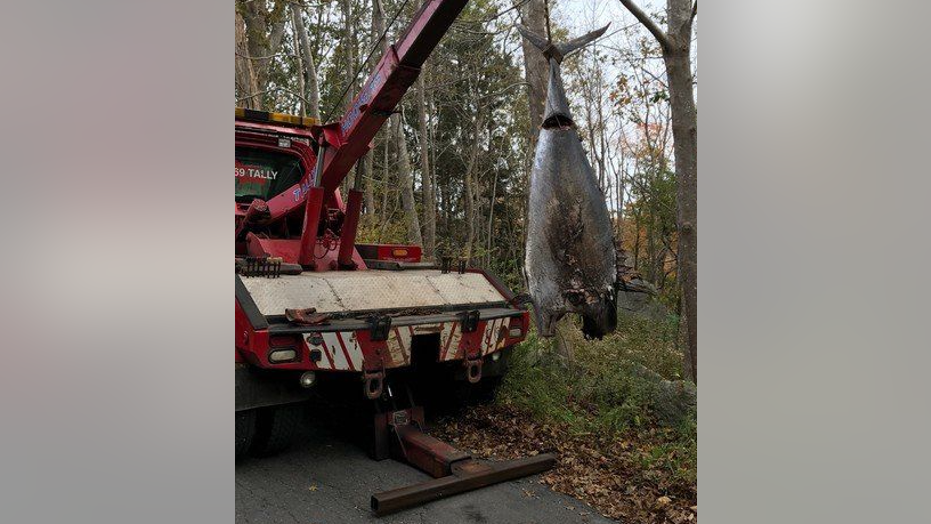 A fisherman was fined $16,000 for illegally catching a Bluefin tuna and disposing of the headless carcass in the woods.

A commercial fisherman has been fined and placed on probation after pleading guilty to dumping a headless tuna in the woods of Massachusetts.

The fishy story began in Nov. 2017, when Harold Wentworth, of Gloucester, reportedly caught the 400-pound bluefin tuna out of season, and subsequently disposed of its headless carcass.

After it was found, local fishing authorities confirmed the tuna was illegally harvested. State Environmental Police and federal fisheries regulators began searching for the culprit, and the tuna was hauled out of the forest by a tow truck.

After it was found in 2017, local fishing authorities confirmed the tuna was illegally harvested, and it was hauled from the woods by a towing company. (Merlin Hunt)

In court this week, Wentworth’s attorney revealed that federal fisheries had already fined his client $15,000 for the illegal catch.

Wentworth also pleaded guilty to littering from a vehicle, improper disposal of waste and driving after license suspension, for which he was sentenced to a year of probation and fined an additional $1,000, Salem News reports.

“The commercial fishing industry is in turmoil for a variety of reasons I won’t go into,” Peabody District Court Judge James Barretto said Monday, as per the Gloucester Times. “For hundreds of years, the people of Gloucester have earned a living by going to sea. The fleet has shrunken so dramatically it’s a national story. Taking tuna out of season makes that job much more difficult.”

During the proceedings, the prosecutor added that Wentworth’s actions were “extremely offensive” to the fishing community.

The bluefin tuna had been worth an estimated $10,000. Wentworth had allegedly planned to offload it on the black market before disposing of it in 2017, per USA Today.