Todd Starnes Discusses A Day Of Prayer For President Trump

One week after praying for President Trump during a Sunday service, Pastor David Platt addressed the fallout of his decision during a Southern Baptist pastor's conference Sunday, saying it put the leader of the Northern Virginia megachurch at "increased security risk."

The former leader of the SBC's International Mission Board told the thousands of fellow pastors gathered at the two-day conference leading up to the annual meeting of the Southern Baptist Convention in Birmingham, Ala. that he knew some would be "delighted" and others "disheartened" by the prayer, reported The Christian Post.

"I somehow managed to be labeled in Washington both a far-right-wing conservative and a far-left-wing liberal in less than 24 hours," Platt told his fellow pastors. "That is not easy to do."

He explained that he was called backstage right before serving Communion and was told Trump was on his way to the church. His mind racing, he immediately went to the Bible verse 1 Timothy 2:2, which calls for prayer for leaders. Although his church wasn't officially participating in Rev. Fraklin Graham's "Special Day of Prayer" for Trump, it was the same verse the evangelist used to encourage pastors around the nation. 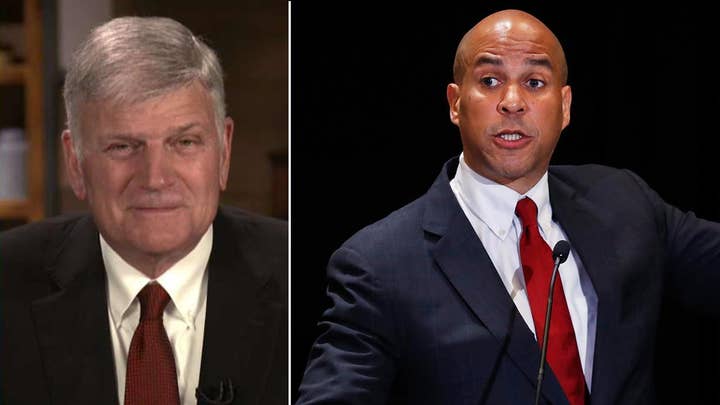 Speaking on the Beatitudes, Platt said he is no expert in "meekness," but he said Jesus, who is not only "our judge, He is our defender," is.

"Sunday, a week ago, I made a lot of people glad with the decision I made, and I made some other people mad. So you know what I did? I turned around Monday and I took the people who were glad and made them mad,"  he said. "Albeit, unintentionally, I successfully ensured that no one would be happy with me."

But he added that meekness means not needing to defend himself but listening to others who don't agree.

"If you don't ever have conversations with Bible-believing Christians who have different views on politics and on positions that you hold, including people who might not think it wise to bring the president on stage in a church gathering, meekness may mean humbly expanding your listening to people who aren't just like you."

The SBC annual meeting takes place on Tuesday and Wednesday this week. Leaders say they will focus on addressing sexual abuse prevention and help for survivors, growing the leadership of ethnic and gender diversity, and the steady 15-year decline in membership.