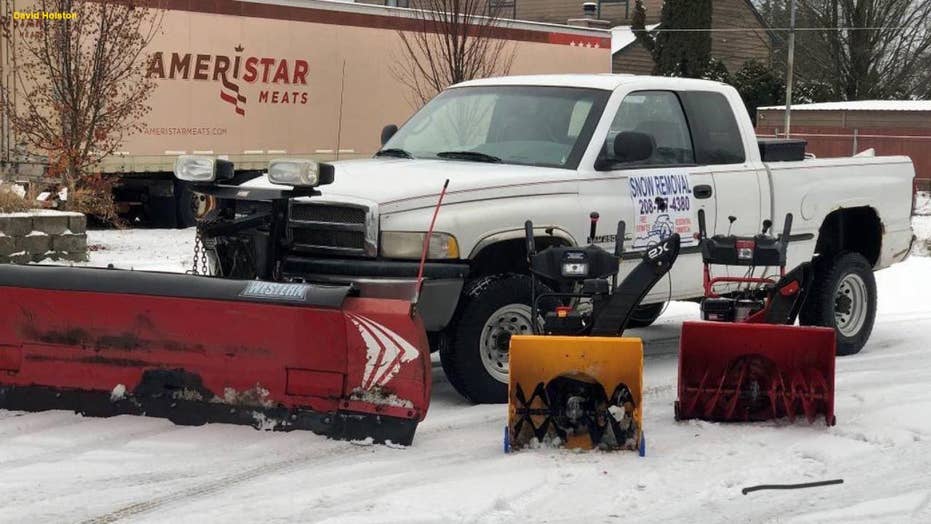 David Holston, 18, from Coeur d’Alene, Idaho made more money plowing snow in Seattle in four days than many people make in a year. Now he's giving back in a big way to God, whom he credits with his success.

David Holston is not your typical teen.

The 18-year-old entrepreneur who started a landscaping business in Coeur d'Alene, Idaho last spring made more in four days than many make in a year after a lucrative trip to Seattle with his truck and a plow just when the Emerald City got hit with historic levels of snow -- 10 inches in some parts of the city.

Streets, homes and cars remain snow-covered on one of Seattle's steeper hills, Queen Anne, Monday, Feb. 11, 2019. Schools and universities closed across Washington state and the Legislature canceled all hearings as the Northwest dealt with snow and ice and prepared for more as a series of winter storms socked the region. (AP Photo/Elaine Thompson)

In total, Holston made $35,000 in four days and said he plans to give $7,000 of that "to God" through his local church and other Christian organizations.

GRANDMOM, 84, GOES BACK TO COLLEGE AMID CANCER DIAGNOSIS: 'TRUST GOD NO MATTER WHAT'

"I plan on tithing 20 percent to advance the kingdom of God, buy mowers for this year's mowing season, and save the rest for buying my first house debt free!" Holston told Fox News. "I credit all of my success to my savior Jesus Christ who died on a cross to forgive my sins and three days later rose from the dead."

Holston was visiting his mom on her birthday while she was recovering from surgery. But, before he left, his friend tipped him off that there would be a foot of snow in Seattle, which the area wasn't prepared for. So he drove his truck and plow there and worked 12-to 15-hour days, starting around 2 a.m.

Holston's phone was ringing off the hook the entire time he was plowing. In total, he ended up plowing driveways and parking lots for businesses, apartment complexes, and other locations.

COMMUNITY RAISES $35G FOR WALMART CASHIER WHO PAID FOR WOMAN'S BILL: 'LORD TOLD ME I HAD TO HELP HER'

He credits his work ethic to a Bible verse from the gospels, Luke 12:31.

"But seek first the kingdom of God, and all these things will be added unto you."