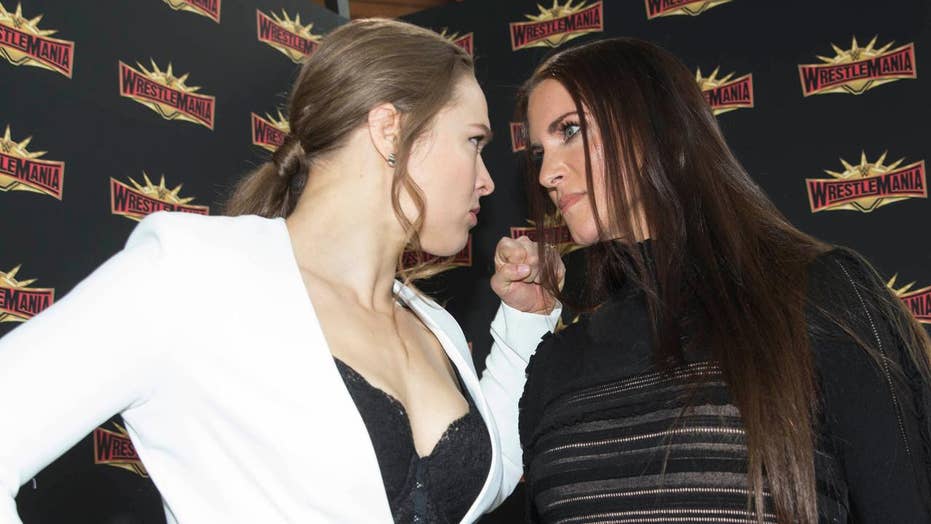 For the first time in WWE history, this year’s "WrestleMania" will feature an all-women’s main event.

In the groundbreaking announcement, WWE Public Relations revealed on Twitter that “The Man” Becky Lynch, Charlotte Flair and Raw Women’s Champion Ronda Rousey will finally face off in the main event on The Grandest Stage of Them All.

The heated rivalry began at SummerSlam 2018, when both Charlotte Flair and Becky Lynch challenged Carmella for the "SmackDown Women’s Championship." The end of the match saw Lynch nearly gain the win until Flair swooped in and stole the victory. Lynch then attacked Flair to an explosive crowd reaction at the Barclays Center.

NIKKI BELLA ANNOUNCES RETIREMENT FROM WWE: 'I JUST FEEL LIKE I'M TOO OLD'

The feud between the two continued on, with Lynch defeating Flair for the Championship at the "Hell in a Cell" event. Lynch successfully defended the title against Flair at "WWE Super Show-Down" and "WWE Evolution" in the following months.

Leading up to "Survivor Series," an event that pits "Raw" Superstars against "SmackDown," Lynch became embroiled in a bitter feud with "Raw" Women’s Champion Ronda Rousey — attacking her backstage during an episode of “Monday Night Raw.” Lynch suffered a concussion during the ensuing brawl later on in the episode, and was ultimately replaced by Charlotte Flair at "Survivor Series."

In December, Becky Lynch lost the "SmackDown" Women's Championship to Asuka in the first-ever women's triple threat Tables, Ladders and Chairs match — a match that also featured Charlotte Flair. One month later, Lynch won the second-ever "Women’s Royal Rumble" match — punching her ticket to a title shot of her choosing at WrestleMania. After failing to regain the "SmackDown" Women’s Championship at Royal Rumble, Lynch then took aim at "Raw" Women’s Champion Ronda Rousey.

The two took the WWE Universe by storm, trading various insults on television and online — creating a compelling feud that had legions of fans rallying behind “The Man” Becky Lynch. Lynch was eventually removed from the match-up after attacking authority figures Stephanie McMahon and Triple H — to which she was replaced by Charlotte Flair. Lynch eventually worked her way back into the match after defeating Flair via disqualification at the "Fastlane" event.

The storied rivalry finally comes to a head in the history-making, all-women’s main event at "WrestleMania." This year’s "WrestleMania" will take place on Sunday, April 7th and will emanate from MetLife Stadium in New Jersey.