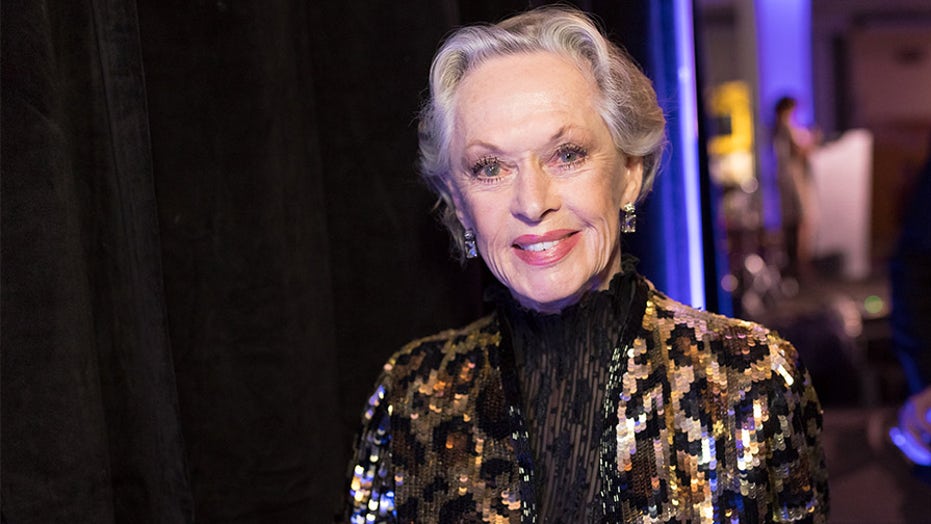 Tippi Hedren is still a big cat enthusiast at age 90.

Hedren, the actress who shot to fame thanks to her roles in Alfred Hitchcock's "The Birds" and "Marnie," has been known for housing dozens upon dozens of felines at her animal sanctuary in California over the years.

In a virtual appearance on "The Graham Norton Show" this week, Hedren's granddaughter, actress Dakota Johnson, confirmed the '60s star is very much still living among a number of big cats.

DAKOTA JOHNSON EXPLAINS WHAT HAPPENED TO THE GAP IN HER TEETH: 'I'M REALLY SAD ABOUT IT TOO'

The British talk show host shared incredible throwback photos from Hedren's home, featuring a huge tiger jumping through her kitchen window just inches away from her. In another shot, Hedren's daughter and Johnson's mother, Melanie Griffith, is being nearly bitten by a lion as she jumps into a pool.

"Classic," Johnson said while viewing the jaw-dropping photos. "She didn't lose the leg!"

Actress and activist Tippi Hedren in the kitchen of her home in Acton, California in 1994. Tippi was on the phone as a tiger named Zoe jumped through the kitchen window.  (Getty)

Johnson said that by the time she was born, Hedren's rather large animals were "all in huge compounds," meaning visits to Hedren's were "a lot safer" than what her mom Griffith experienced.

"It wasn't as psycho as it was when they first started," Johnson recalled.

Hedren first worked with big felines in the 1981 film "Roar," which has been described as one of the most dangerous films ever made. She discussed how she became a big cat enthusiast in an interview with Fox News in 2017.

"When we wanted to use Hollywood acting animals to do the movie, [the trainers] would say, "I’m not going to let my big cat work with another cat. Get your own animals to do the film!" So that’s how that happened," Hedren shared.

"And we found there were so many lions and tigers being bred to be sold as pets — which is an unconscionable act, these are apex predators. For anyone to sell a baby lion or tiger to some family to become its pet is … it’s one of the most dangerous things that could ever have happened. Everything just grew from that.

Upon learning about the illegal sale of tigers and lions -- which has recently become a hot topic of debate following the release of Netflix's "Tiger King" in March -- Hedren went on to pass a bill against it in 2003.

"It took a long time before we started seeing results of the bill, but it’s still working," she told us. "I’m thrilled about it because these animals are not pets."

Hedren lives at the Shambala Preserve, an animal sanctuary she founded in Acton, Calif. The reserve has been home to endangered exotic cats including African lions, Siberian tigers, bobcats and more.