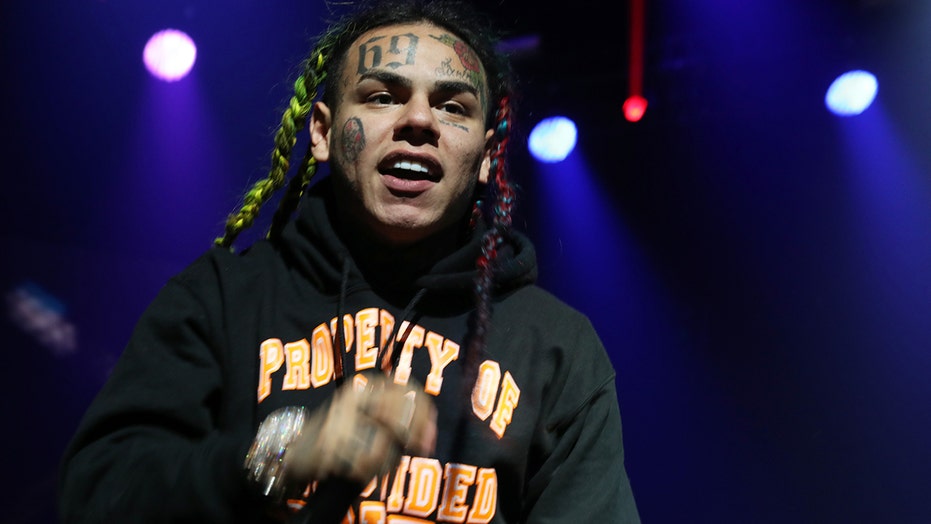 Tekashi 6ix9ine has released his first new song since being released from prison early amid the coronavirus pandemic.

"IM BACK HAHAH THEY MAD GOOBA OUT NOW," he tweeted.

Tekashi, real name Daniel Hernandez, boasted about his return to music in a second tweet, writing, "I'm still the King of New York" along with a screenshot from his Instagram proving that 2 million users were watching his live video on the social media platform.

He also shared a link to his colorful line of merchandise which features bright pastel sweatpants and matching hoodies.

"This what I was wearing in the video!" he wrote.

The "Gooba" music video attracted over 36 million views on YouTube by Saturday afternoon. The eye-catching video features the rapper donning his signature rainbow braids and colorful puffer jacket. A bevy of women are also featured in the music video twerking around the artist.

The 24-year-old was granted an early release from prison because of his asthma, which makes him more susceptible to contracting COVID-19.

Last month, the rapper's attorney, Lance Lazzaro, confirmed his release, telling Fox News, "We are all very happy that he was released."

He told the Los Angeles Times in a phone interview: “The judge granted the motion basically because of the virus that’s ravaging our nation."

His April release followed more than a week of failed attempts from Hernandez’s legal defense team to persuade the Bureau of Prisons to release him early from his sentence, which was set to end on Aug. 1., for his conviction on racketeering charges last year.

Per the terms of his release, Hernandez, 23, will serve the remainder of his 2-year sentence from the confines of his home, and during the first four months of home incarceration will be subject to GPS monitoring and may only leave the premises for necessary medical treatment or to visit his legal counsel -- which must first be approved by the probation department.

Furthermore, if the GPS monitoring device goes offline or malfunctions, Hernandez will be required to hop on a daily video call with his probation officer, according to TMZ.