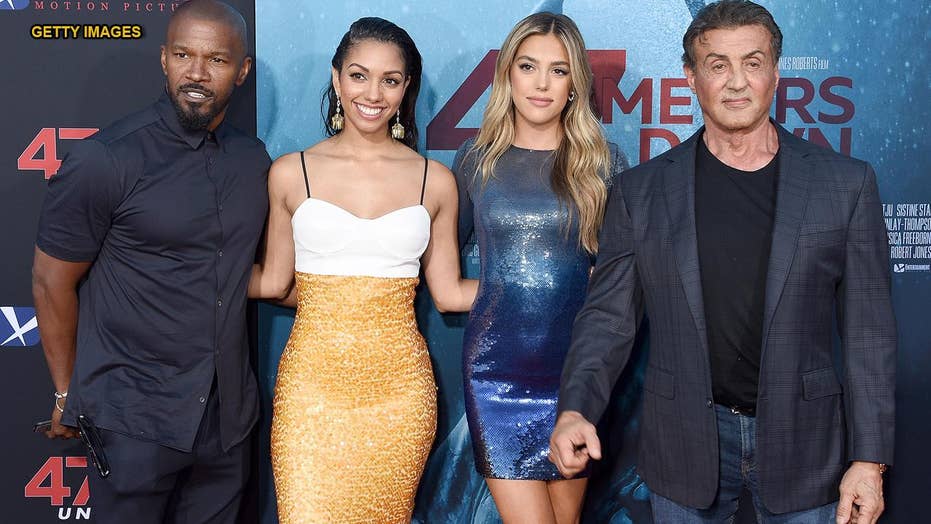 '47 Meters Down: Uncaged' stars Corinne Foxx and Sistine Stallone explain what compelled them to purse acting and share the advice their fathers, Jamie Foxx and Sylvester Stallone, gave them.

The pair are set to make their big-screen debut in the upcoming thriller, "47 Meters Down: Uncaged."

The 25-year-old Foxx said she originally didn’t want to enter the family business “just because there was a lot of pressure.” However, she quickly realized the 9-to-5 life was not for her.

“I got a job at an advertising agency and was like ‘I don’t want to do this anymore,’” Foxx said. So she returned to her hometown of Los Angeles, took part in some auditions, and was soon on her way.

Stallone, 21, says she didn’t have an "aha" moment herself but explained that she looked at acting as a fun new challenge, and ended up falling in love with the craft.

KATIE HOLMES AND JAMIE FOXX ARE A 'REALLY GREAT' COUPLE, HIS DAUGHTER SAYS

“I was going to school, I was thinking, 'I want to kind of do something out of my comfort zone,'" she admitted, adding that she didn’t think she’d be any good as a thespian but decided to give it a whirl.

“I thought, 'No way I can act because I’m horrible,' and I think it’s just something you’re born with, something clicks for you," she confessed. "I never tried it. [But] I just started doing things and auditioning and one thing led to another.”

In their first ever-film, Foxx and Stallone star alongside Sophie Nélisse and Brianne Tju as a group of teens who face off against Great White sharks while trying to escape from the underwater labyrinth of a Mayan city.

The ladies shot the movie in the Dominican Republic and had to get scuba certified prior to filming their underwater scenes. The training, according to Stallone, was “extremely difficult but also a lot of fun.”

And although they did a lot of their own stunts, Foxx admits that there is one that she chickened out on.

“We jump off this cliff and all the girls did it but me,” she says, with a sheepish grin, adding that she’s the oldest of the four leading ladies and her 25 years of wisdom left her thinking about the potential consequences of the risky action.

Filming in open water was also a bit scary for the actresses. Nélisse says the endeavor made her “a little more afraid of the ocean” because filming with sharks “seemed so real.” Foxx says the girls didn’t get to see the CGI shark until the final cut and watching the drama unfold on screen is “terrifying.”

“It was way scarier than what I thought it was going to be!” Stallone said of the final product.

With their first movie under their belts, it’s evident that Stallone and Foxx have definitely caught the acting bug.

Armed with the advice of their famous fathers, the girls are ready to keep going in Hollywood. “My dad has always said to have fun with it. This industry is very tough on you. You can really buy into how difficult it is and cutthroat,” Foxx says. And Stallone says her dad told her to “trust your own judgment and your own instincts and you’ll go where you need to go.”

While the duo looks up to their seasoned actor dads for career inspiration, they playfully reveal that they haven’t always been impressed with all of their projects.

Stallone jokes that her “favorite” film of her father's is "Rhinestone," a 1984 musical comedy co-starring Dolly Parton. “He had these rhinestones. He was this cowboy singer. He was the worst singer but he honestly thought he was good, which was the funniest part of it all,” she teases.

And there is one film of Jamie Foxx's that her daughter never plans to see. “He has a movie [1997's] 'Booty Call.' I’ve seen the poster for it. It doesn’t seem like something I’d be too proud of,” she said with a grin.

"47 Meters Down: Uncaged" is out in theaters now.