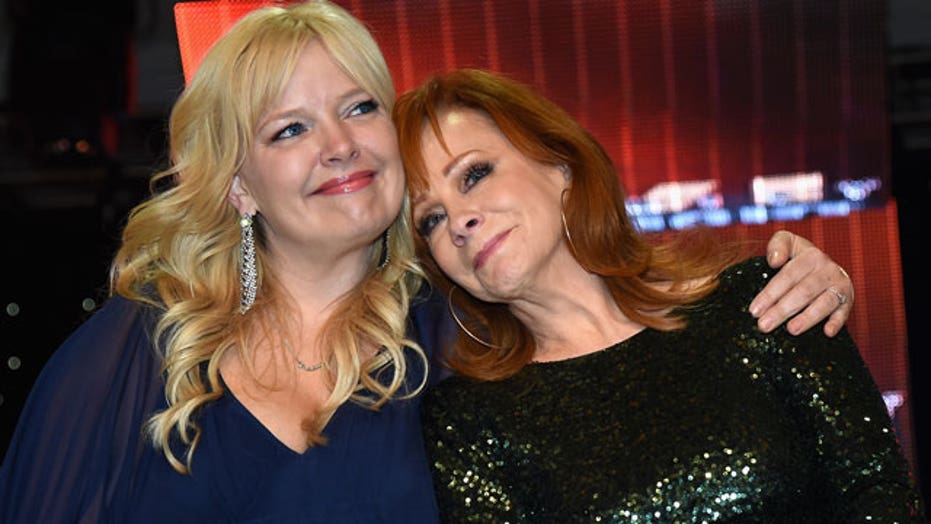 ACM Awards host Reba McEntire opened the 54th annual country music celebration with sharp criticism that not one single female artists was nominated for Entertainer of the Year.

Hot on the heels of a huge announcement that Reba McEntire and Dolly Parton will replace Brad Paisley as co-hosts for the upcoming CMA Awards in November alongside Carrie Underwood, “Punchline” host Melissa Peterman has no doubt McEntire will shine.

The comedian and game show host was a series regular on McEntire’s self-titled knee-slap sitcom "Reba" during the show’s six-year run and has over 100 episodes with the country music icon under her belt.

“She's wicked funny, but don't play Backgammon with her though. She's hardcore but she genuinely is really, really funny and she knows how to play the street,” Peterman told Fox News.

“She knows how to tee it up perfectly. We never have to talk anything through. If we're at an event and we're going to do a bit or something, we never really have to talk it through because I know I could just look at her and I know she's going to do exactly what we need to do. She's gonna tee me up or she's going to hit it home.”

Peterman, 48, said she and McEntire’s comedic timing has grown to a point where the two can essentially telepathically communicate with each other; she said she considers the three-time Grammy Award-winner one of her closest pals.

“I would, to this day consider her one of my best friends. She's got my back,” said Peterman. “We texted just last week, we just spent a weekend together at a mutual friend's wedding not so long ago and she's truly one of the people I can count on.”

“I know I can call at any time of the day and she would be there," pointing that they worked on over 100 episodes together and even had her baby during that show. “Reba McEntire was the first woman to sing to my son – which you know, set the bar really high for him. Poor thing has never heard better. I've never lived up,” she quipped.

“Day one, it was ruined, sorry kid. It's never gonna get better than that. You just had the best-of-the-best come sing to you.”

The “Baby Daddy” star described McEntire’s aura on set during the series’ run as “infectious” and explained how the 16-time Academy of Country Music Award-winner strived to make everyone feel respected and appreciated – and that same energy was often extended to guest-stars as well.

“Steve Howey just had a birthday and we were texting all night — like it's where you become family when you're in a situation where you spend so much time with people and it was such a great thing to have her be sort of the leader of a show,” said Peterman.

She continued: “It was my first series regular and I just watched her how she came in every day and made it fun, but it was respectful – everyone felt appreciated and from watching her and then going on to the next show thinking, 'Oh my gosh, would it ever get this [good],' and then getting to do 100 episodes with the cast of "Baby Daddy" and trying really hard to create that same atmosphere – we're super lucky to do what we do.”

REBA SLAMS 'BRO TREND' IN COUNTRY MUSIC: 'I WOULD REALLY LIKE IT TO GET BACK TO THE REAL STRONG COUNTRY'

“So it was Reba who said, ‘Let's make sure that everyone that walks on this set wants to come back,’ and that's what I learned. I hope I'm doing it here – I think so when people come back. They want to do 'Punchline' again. So I think it's working.”

Peterman said she knew McEntire, 64, had the goods from the moment she saw her during the first table-read of the script.

“You read it and you walk in with ideas in your head. I think at the same time, I'll say she just finished a stint on Broadway in 'Annie Get Your Gun,' so I know the girl can do it all,” Peterman praised of McEntire’s comedic chops. “It seemed to be so wickedly funny at that table-read, we were surprised.”

“And I tell people to this day that if you had told me years ago that one of my most perfect comic partners was going to be Reba McEntire, I wouldn't believe you because she really – and this is also the secret to her which I think all great comedians, actors, artists have is that she wants everyone to shine. She's generous with it,” added Peterman.

“If it's a joke, she'd say ‘Melissa would do that funnier, give it to her,’ or, ‘Steve Howey would be funny, give that line to him.’ So even though the show had her name on it, she wanted to share the spotlight because she knows when everyone shines, the show as a whole does better.”

Peterman and McEntire will forever go to the mat for one another, though to this day Peterman still can’t believe the two are as inseparable as they are, especially considering the fact no one can hold a candle to the prowess McEntire has showcased through every endeavor.

“It's not fair. She can sing and she's funny and she never ages and she has a super-high metabolism, so I don't know why we're friends,” Peterman joked. “I should hate her, right?”