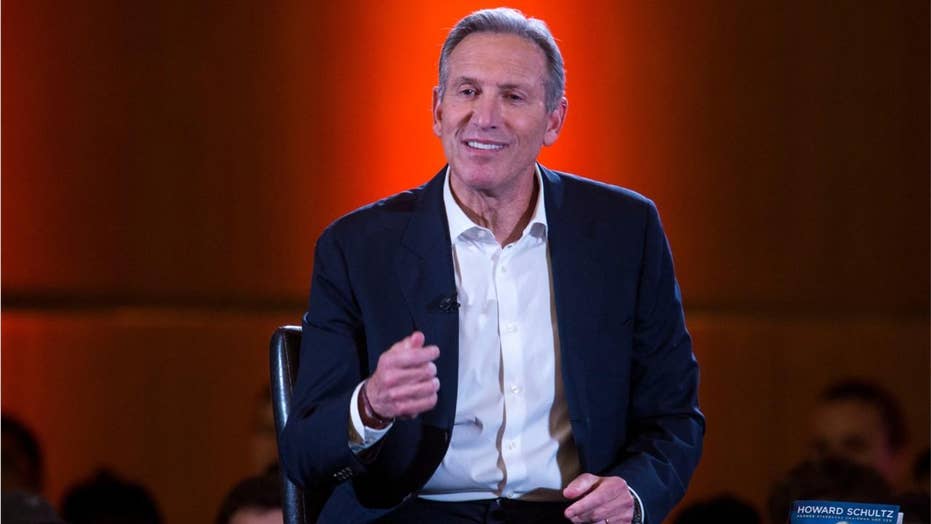 Starbucks employees were given instructions for handling questions about former CEO Howard Shultz’s book and his political ambitions.

Schultz has ruffled feathers among Democrats after he announced that he was seriously considering an independent run in 2020, which many critics believe will aid President Donald Trump’s reelection.

Appearing on “Late Night with Seth Meyers,” Moore expressed his disdain for Schultz, mocking the potential candidate for describing himself as a “self-made billionaire."

MICHAEL MOORE DOUBLES DOWN ON CLAIM THAT TRUMP COULD BE AMERICA'S LAST PRESIDENT: 'I THINK IT'S POSSIBLE'

“Right away by admitting that you had subsidized public housing paid for by the tax dollars of the American people, you aren’t self-made. You got a hand-up from us like we wanted it,” Moore said of Schultz growing up in project housing in New York. “We want to help our fellow Americans. It’s a form of socialism, public housing, and yet he’s saying, ‘I’m all self-made.’ He went to public university, he went to Northern Michigan University actually, and you know, again, financed by taxpayer’s dollars. And he sells coffee, which is essentially water using city water systems, municipal water systems… You got to be a billionaire because we’re paying for the water!”

When asked whether Schultz should run for president, the political documentarian urged everyone not to go to Starbucks “until he announces he’s not running.” He also suggested setting up “lemonade stand”-like tables outside of Starbucks and sell their own coffee.

Moore shared his excitement over “outlawing billionaires,” calling their existence “immoral.” He then compared two news stories, one of a young mother who died trying to take a stroller up the subway stairs and the other of a man who bought a $238 million penthouse.

Meyers also took a stab at Schultz, blasting the potential presidential candidate for his recent criticisms of high-profile Democrats including 2020 candidate California Sen. Kamala Harris for pushing Medicare For All and for Massachusetts Sen. Elizabeth Warren for pushing a wealth tax.

“Seriously, you think people are gonna vote for you, you over them because you’re the CEO of a coffee company?” Meyers asked. “If Schultz really doesn’t like the Democratic field, he can just run against them in a Democratic primary, but he wants to bypass the process because he thinks he’s entitled to it. That’s right, the guy who ran Starbucks doesn’t want to wait in line.”

“We don’t want a president who can’t separate his last job from his current job.,” Meyers continued. “[Trump] was a builder. Now all he does it talk about building a wall. Instead of health care, what are you gonna give us, cake pops?”

Meyers also mocked President Trump for tweeting that he hopes Starbucks is still paying him for his rent in Trump Tower.

“First of all, why would anyone in New York go to the Starbucks in Trump Tower? There’s two on every block. That’s like going to a Mets game just for the Shake Shack,” Meyers told his audience. “Second, Trump just admitted he still makes money from his businesses. You’re supposed to lie and say your business is separate. If Vladimir Putin announced that he was running for president, Trump would tweet, ‘I hope he’s still paying me bribes!’”