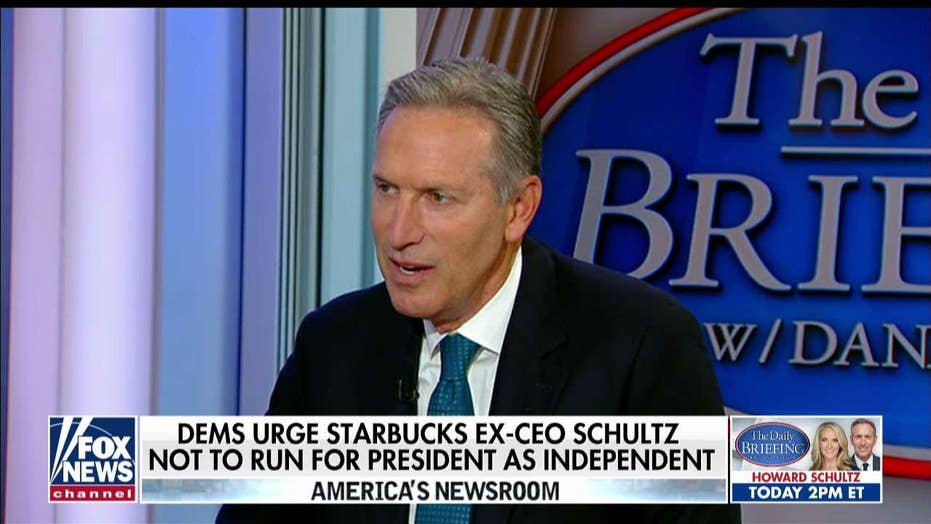 Howard Schultz responds to Dems urging him not to run in 2020.

Former Starbucks CEO Howard Schultz, in an interview with Fox News, fired back Wednesday at Democrats who are fuming over the possibility he could launch an independent presidential bid and claiming such a move would boost President Trump in 2020.

Speaking to Dana Perino on “The Daily Briefing,” Schultz said critics claiming he'd play a spoiler role by siphoning off Democratic votes are overreacting and claimed he is just as likely to draw moderate Republican voters from Trump.

“I think they've over-rotated completely because it's very possible that if I run for president as a centrist independent that more lifelong Republicans will come my way than Democrats. So I think the whole thing is just an overreaction in 24 hours,” he said.

The Democratic pushback over Schultz’s possible independent presidential run began immediately after he told “60 Minutes” on Sunday that he was considering a bid for the White House. Since then, prominent Democrats from David Axelrod, the former adviser to then-President Barack Obama, to Tina Podlodowski, the Democratic Party chairwoman in Washington state, have all urged him not to launch a campaign.

"For somebody who is professing to be a lifelong Democrat, I think to be running as in independent in this particular cycle is not a wise thing to do," Podlodowski said. 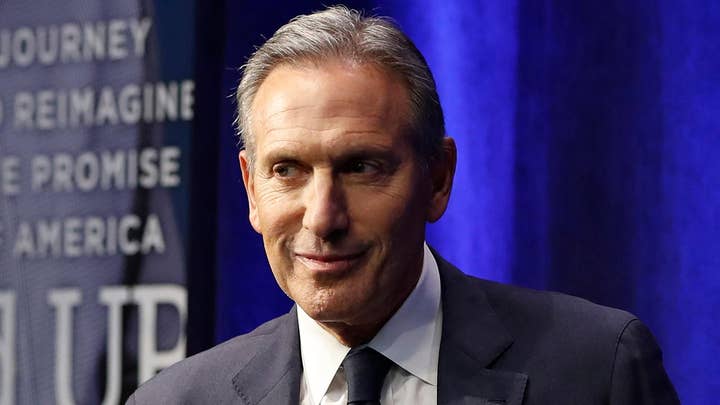 The 65-year-old Seattle billionaire launched a tour Monday to promote his latest book, "From the Ground Up: A Journey to Reimagine the Promise of America." He has stops this week in New York; Tempe, Arizona; Seattle; and San Francisco — but no dates listed for the early-voting states of Iowa or New Hampshire.

He's been mentioned as a potential candidate many times before, and he's done little to quell speculation about his presidential ambitions since saying when he retired from Starbucks last June that his future could include "public service."

HOWARD SCHULTZ, MULLING 2020 RUN, APOLOGIZES FOR ROLE IN NBA TEAM LEAVING SEATTLE - BUT NOT ALL ACCEPT

Schultz, speaking on Fox News, also responded to criticism from Democratic presidential candidate and Massachusetts Sen. Elizabeth Warren that somebody like Schultz or former New York City Mayor Michael Bloomberg only want to run for president to “keep a rigged system in place.”

“I find that so offensive,” Schultz said. “First of all Elizabeth Warren doesn't know me. I mean I started from nothing. I'm self-made. Isn't that the promise of America to that regardless of your station in life or where you come from that you can be successful in this country?”

He added: “I also think it's ludicrous. Elizabeth Warren a number of years ago knocked on my door and asked me for money when she was running for the Senate.”