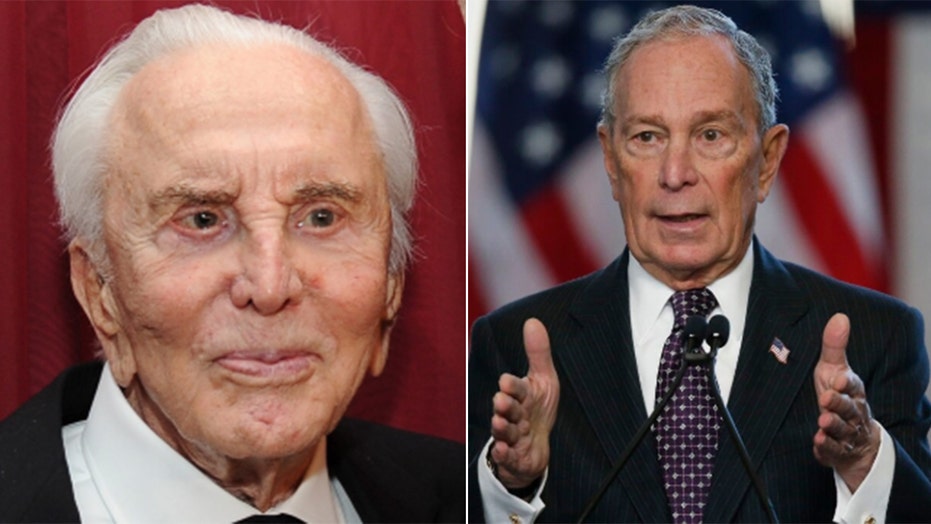 Michael Douglas is opening up about his father Kirk Douglas' last days, including which 2020 presidential candidate the Hollywood legend endorsed before his death.

According to Douglas, 75, the "Spartacus" actor voiced support for Democratic presidential candidate Michael Bloomberg before he passed away last week at the age of 103.

Michael made the revelation about his father's political views while speaking to a crowd in Oconomowoc, Wis. on Saturday, according to local outlet WKOW. Catherine Zeta-Jones' husband voiced his own support for Bloomberg at the event.

Kirk Douglas voiced support for Mike Bloomberg before he passed away on Wednesday at age 103. (Getty, AP)

According to WKOW, Michael wasn't sure how serious Kirk was about his support for Bloomberg.

"I don't know if he was pulling my leg or not, but one of the last words that he said in the hospital, when he came and he saw me, asked me to lean over close to him, and I leaned over close to him and he said, 'Mike can get it done'," Michael said via WKOW.

Michael campaigned for Bloomberg throughout Saturday afternoon, speaking at a second event in the region, the report said.

The actor's Wisconsin appearances took place just one day following Kirk's funeral, which he attended with his wife and siblings.

The "Fatal Attraction" actor announced his father's death on social media on Wednesday.

"It is with tremendous sadness that my brothers and I announce that Kirk Douglas left us today at the age of 103," he wrote Wednesday. "To the world he was a legend, an actor from the golden age of movies who lived well into his golden years, a humanitarian whose commitment to justice and the causes he believed in set a standard for all of us to aspire to.

"But to me and my brothers Joel and Peter he was simply Dad, to Catherine, a wonderful father-in-law, to his grandchildren and great grandchild their loving grandfather, and to his wife Anne, a wonderful husband."

Michael concluded his post by with this tribute:  "Kirk's life was well lived, and he leaves a legacy in film that will endure for generations to come, and a history as a renowned philanthropist who worked to aid the public and bring peace to the planet. Let me end with the words I told him on his last birthday and which will always remain true. Dad -- I love you so much and I am so proud to be your son."

Kirk is survived by his wife of 65 years, Anne Buydens, their son Peter Douglas, and Michael and Joel Douglas from his first marriage.