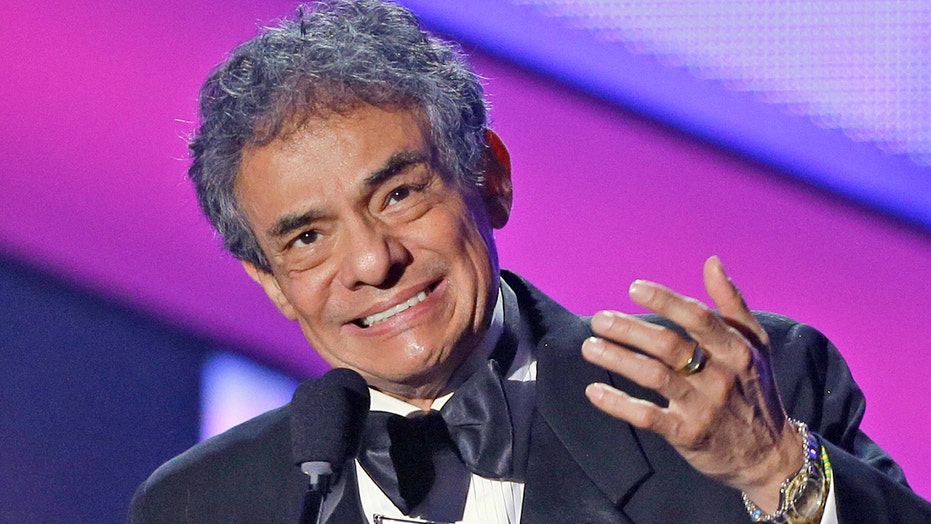 Mexican crooner José José, the elegant dresser who moved audiences to tears with melancholic love ballads and was known as the "Prince of Song," has died at the age of 71.

Mexican artists' association ANDI confirmed the death in a Twitter post on Saturday. Multiple media outlets said the singer had died of pancreatic cancer at a hospital in South Florida.

José José, whose real name is José Rómulo Sosa Ortiz, climbed to the top of the Latin charts in the 1970s with slow songs such as "El Triste" or "The Sad Man," and "Amar y querer" or "Love and want." The power of his voice and ability to sing technically difficult tunes in a wide register made him a treasured cultural icon in Latin America.

The artist's voice, a combination of baritone and lyric tenor, captivated audiences while his dress style of suits accented with bow ties, pocket handkerchiefs and silk scarves was copied at nightclubs across Latin America.

"He squeezed our hearts with his unmistakable voice and left an indelible mark on the world of music," Latin music star Gloria Estefan said on Twitter.

José José was born to a family of musicians on Feb. 17, 1948 in Mexico City. His mother, Margarita Ortiz Pensado, was a concert pianist and his father was a tenor in the National Opera of Mexico.

"I wanted to honor the memory of my father, who was a great opera singer and died very young, without knowledge of my success," José José told The Associated Press in a 2005 interview. "Since I inherited his voice, this is recognition of that inheritance."

José José got started in music singing in cafes before founding a rock group called the Heart Breakers that launched an unsuccessful album in the mid-60s. His solo career took off with a single called "La nave del olvido" or "The ship of the forgotten" and peaked in the 1980s with albums like "Secrets," his best-selling collaboration with Spanish love song composer and producer Manuel Alejandro.

WHY FRANK SINATRA WAS WARNED NOT TO MARRY MARILYN MONROE

He struggled with Lyme disease, facial paralysis, substance abuse and depression. His problems with alcohol and drugs led to the 1993 dissolution of his 18-year marriage with model Anel Noreña, with whom he had two children: José Joel y Marisol. He hit bottom following the separation and began sleeping in a taxi on the outskirts of the Mexican capital. Friends intervened and took him to an addiction treatment center in the U.S.

The artist married again in 1995, to a Cuban-American named Sarita Salazar who he met while in rehab. The couple had a daughter, Sara, the following year.

Fans gather to sing and remember Jose Jose while mourning his death at Jose Jose's statue in Mexico City, Saturday, Sept. 28, 2019. Mexican crooner Jose Jose, the elegant dresser who moved audiences to tears with melancholic love ballads and was known as the "Prince of Song," has died at the age of 71. Mexican artists' association ANDI confirmed the death in a Twitter post on Saturday. (AP)

José José was nominated on multiple occasions for a Grammy, but never obtained the prize. The Latin Recording Academy recognized the singer with a Musical Excellence Prize at the 2004 Latin Grammy awards. That same year, he received a star on the Hollywood Walk of Fame.

His voice troubles made it very difficult for him to sing in his later years. For a 2008 concert with Greek composer and pianist Yanni, it took the by-then scratchy-voiced Mexican singer seven days to prepare "just to attempt to sing," recounted Yanni in a video posted to Twitter. "That was an act of bravery on his part," he added.

"He fought really hard for every word, for every sound," said Yanni.

The icon had confirmed via a video message to fans in March 2017 that he was battling pancreatic cancer. "I'm ready to face this new adventure in my life hand-in-hand with God and hand-in-hand with you all," he told followers.

The death of José José hit hard in Mexico, which endured the 2016 death of another cherished crooner from the same era: Juan Gabriel.

Mexican President Andrés Manuel López Obrador said he was sad to hear of José José's death. "He was an extraordinary singer from an era that, with his songs and his romanticism, made a lot of people from my generation cry and be happy," he told reporters.

José José counted on the unrelenting adoration of fans who turned out to see him as recently as 2017 for concerts in Puerto Rico and the U.S., despite his failing vocals.