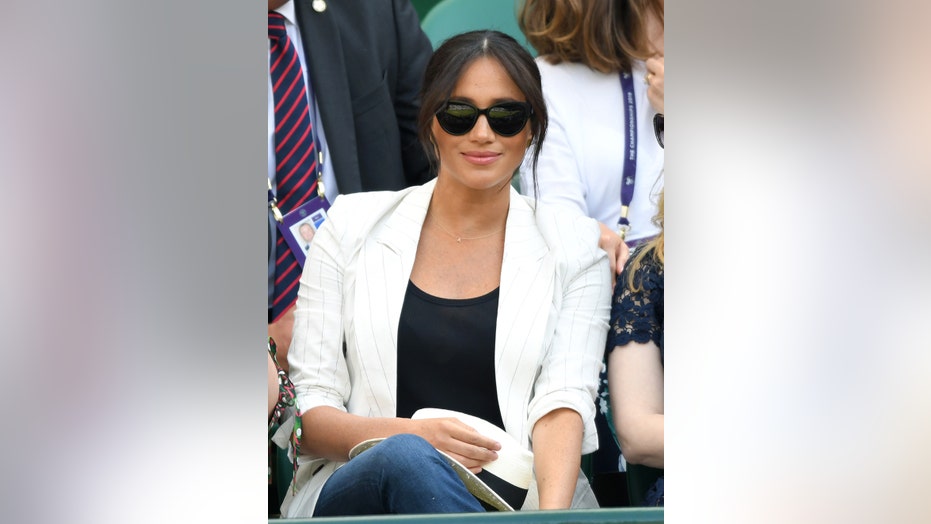 Meghan Markle stunned audiences at Wimbledon when she appeared to support her friend Serena Williams.

The Duchess of Sussex was spotted in the stands alongside pals Lindsay Roth and Genevieve Hillis to watch the tennis star play. The appearance sparked rumors that the 37-year-old, who was with two of her oldest and closest friends, has chosen the women to be godparents for son Archie’s christening on Saturday.

The former American actress previously attended the tournament in 2016, which was around the same time she was set up on a blind date with her future husband, Britain’s Prince Harry. Last year, she joined sister-in-law, Duchess of Cambridge Kate Middleton, for the tournament, marking their first joint event together.

Meghan, Duchess of Sussex (C) attends day 4 of the Wimbledon Tennis Championships at the All England Lawn Tennis and Croquet Club on July 4, 2019 in London. (Photo by Karwai Tang/Getty Images)

According to People, Markle first met Williams, 37, at the 2010 Super Bowl in Miami where they quickly became friends. Williams and her husband Alexis Ohanian would go on to attend the royal wedding in 2018 and then joined Markle to watch Harry, 34, compete in a polo match in Ascot, England. Williams also helped throw a star-studded baby shower for Markle in New York City earlier this year.

The two stars also have motherhood in common. Williams welcomed her first child, daughter Alexis Olympia, in September 2017. People shared Williams has since given Markle plenty of advice on navigating being a first-time mom.

While Markle has been on maternity leave since giving birth to Archie Harrison Mountbatten-Windsor on May 6, she has made a few special appearances since then. Back in June, Markle attended Trooping of Colour to celebrate Queen Elizabeth II’s official birthday parade.

Prince Harry, Duke of Sussex and Meghan, Duchess of Sussex ride by carriage down the Mall during Trooping The Colour, the Queen's annual birthday parade, on June 8, 2019 in London. (Photo by Samir Hussein/Samir Hussein/WireImage)

But these days Markle and Harry have been enjoying life in their new home. In an attempt to give their firstborn a more normal upbringing, they have moved out of Kensington Palace for a home in the country, Frogmore Cottage. In addition, they have chosen not to give the baby a royal title.

Back in April, Williams told Business of Fashion that she was determined to give Markle a lavish baby shower.

“Planning something like that takes a lot of effort,” the tennis legend said at the time. “I’m a perfectionist, so I’m like, ‘Let’s make it perfect.’ It’s been a lot in the last few days.”

Markle reportedly took a $100,000 private jet paid for by a pal in Toronto for the trip, and Williams is said to have paid the $75,000 per night lodging at swanky The Mark Hotel for the festivities.

“A lot has been made of how much the shower has cost, but this is not being paid for by the taxpayers, but by her friends, so I really don’t see why anyone should have a problem with it,” royal expert Katie Nicholl said previously. “It is the case that a baby shower is more of an American phenomenon than a British one and I am told Meghan was very keen to have a shower and thrilled that her friends Serena Williams and Amal Clooney offered to host the party. They really pulled out all the stops and made it a fabulous celebration for Meghan.”