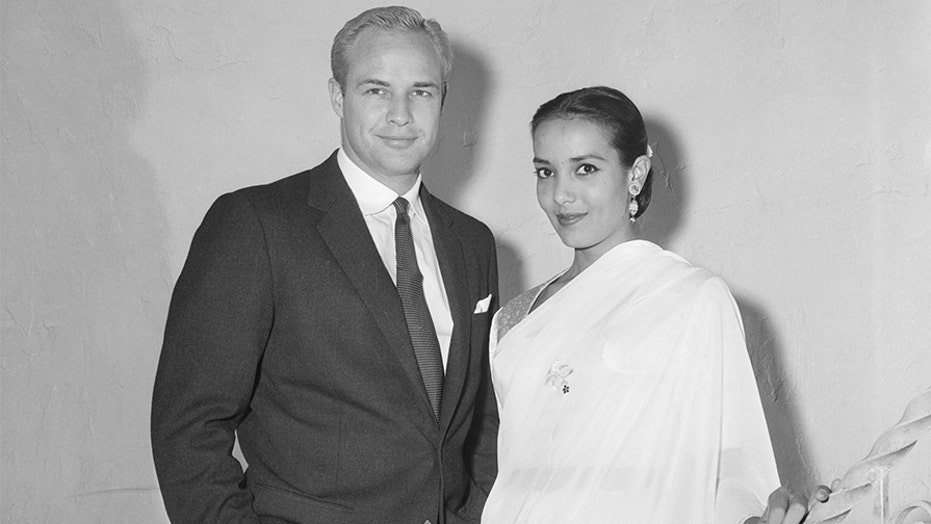 Sarah Broughton was eager to find out what happened to Anna Kashfi, a Hollywood starlet who became Marlon Brando’s first bride and who was plagued by scandal, and then disappeared.

But she never expected to speak with the actress face-to-face.

Their conversations are the basis of the author’s book titled “Brando’s Bride,” which details Kashfi's rise to stardom, her stormy marriage to the Hollywood icon, a public downfall and her mysterious final years. Kashfi passed away in 2015 at age 80 from natural causes.

“I eventually tracked her down and started sending her letters, but never received any kind of response,” Broughton told Fox News. “As part of my research in writing this book, I wrote to her once more and told her I would stop by and knock on her door because I wanted the opportunity to share her story.”

“I expected to get no response," Broughton continued. “Remember, this was a woman who didn’t seem interested in speaking to me. But then she answered the door. When I walked in, my letters were laid out on the table. We spent three days just talking.”

Kashfi, who was born in Darjeeling, India, told gossip columnist Hedda Hopper she was discovered when a Paramount executive spotted her at a party in London when she was just 18. Kashfi soon found herself opposite Spencer Tracy in 1956’s “The Mountain.” She appeared in other films, including 1957’s “Battle Hymn” with Rock Hudson.

And it was at Paramount Studios when she caught the eye of Brando, one of the biggest stars of Hollywood who had already won his first Oscar for 1954’s “On the Waterfront.”

“I think they married because she was pregnant,” said Broughton. “At that point, it was still very scandalous for a woman to have a child without being married. And it would have been scandalous for him, too, not being married to the mother of his child. He told friends that he didn’t think the marriage would last. But he really wanted a baby, so he would give it a go.”

Anglo-Indian actress Anna Kashfi, circa 1958. She was married to American actor Marlon Brando from 1957 to 1959. (Photo by Archive Photos/Getty Images)

Broughton noted the couple had a “tempestuous two-year courtship” where he continued to have affairs with other women. Despite being on and off throughout the relationship, the pair said “I do” for the sake of their child. In 1958, the couple welcomed their son, Christian Brando.

But as Brando had predicted, the union was not meant to be. Kashfi was married to Brando for 11 months before their separation in 1958. They were divorced in 1959.

But the drama was far from over, as each attempted to gain custody of their son. According to the New York Times, the battle for custody lasted for nearly 15 years with numerous court appearances. At one of them, Kashfi slapped Brando across the face in front of stunned reporters and photographers. Each would reportedly accuse the other of domestic violence.

Actress Anna Kashfi, formerly married to actor Marlon Brando, delivers a hard slap in the face to her ex-husband as the two left the courtroom after Brando won a long fight to increase his visitation rights to his three-year-old son by Miss Kashfi. Brando's hair is still styled for his role in "Mutiny on the Bounty." (Photo by Getty)

“Their custody battle was well-documented in newspaper reports,” said Broughton. “They were seen arguing in school and were just extremely volatile with each other. She testified in court she had broken into his house and smashed his table. On another occasion, he had broken into a hotel room where she was staying with her son and took their child.

"They both justified their behaviors. He didn’t feel she could provide a home for their son. And she felt there was a parade of women going in and out of Brando’s house, which was far from the home life she wanted for their son. It was just very difficult for them to have a calm relationship… She slapped him. He slapped her. It was very acrimonious. They made no secret about that.”

Broughton said Kashfi told her that despite Brando’s wandering eye, she attempted to save their marriage. However, she often found herself alone raising a baby while he was off with other women. According to Broughton, it took a couple of days for Brando to even see his son after Kashfi had given birth. But [Brando] insisted that, like Kashfi, he really wanted the marriage to work.

“Anna thought they had a really passionate relationship at one point,” added Broughton. “But she just couldn’t cope with all the other women.”

Anna Kashfi with her son Christian Brando. (Photo by Getty)

Christian would go on to have a troubled life. He spent five years in prison after pleading guilty to manslaughter in 1990 for killing his half-sister’s boyfriend at the family estate, the New York Times reported. Christian alleged he accidentally shot Dag Drollet as they struggled for a gun during an argument over whether Drollett, 26, had beaten his half-sister Cheyenne Brando, who was pregnant.

Cheyenne, who later gave birth to Drollet’s son, took her life in 1995 after losing custody at age 25. Then in 2005, Christian’s ex-wife Deborah Brando sued him for domestic violence. She claimed that after their 2004 marriage, Christian repeatedly beat her and threatened to kill her. Christian countersued, alleging Deborah had broken into his home and beat him because she wanted to annul their marriage 10 weeks after exchanging vows. The lawsuits were settled on undisclosed terms.

“She spoke extremely fondly of her son,” she recalled. “She spoke about him very much and how he was everything to her. She had nothing but fond memories of raising him. She still saw him as her little boy. She described how she enjoyed spending time at home just cooking for him. She tried not to dwell on her difficult times because she truly wanted to be a mother to her son. I think those memories brought her peace, even after everything she endured.”

Kashfi and Brando’s divorce became final in 1960. In 1974, she married electronics executive James Hannaford. He died in 1986. Brando went on to marry two more times before his death in 2004 at age 80 from congestive heart failure.

“She had a lonely existence [in her final years], but she wrote a lot and painted a lot,” said Broughton. “She was lively and hopeful about the future. She endured tragedies, but her final years weren’t sad. She didn’t speak about Brando in a warm way, but she wasn’t derogatory either. I think she felt it was a strange, tough time in her life.”

“There has been so much misinformation written about her over the years,” said Broughton. “She was a survivor. And I hope this time people will see that for themselves.”