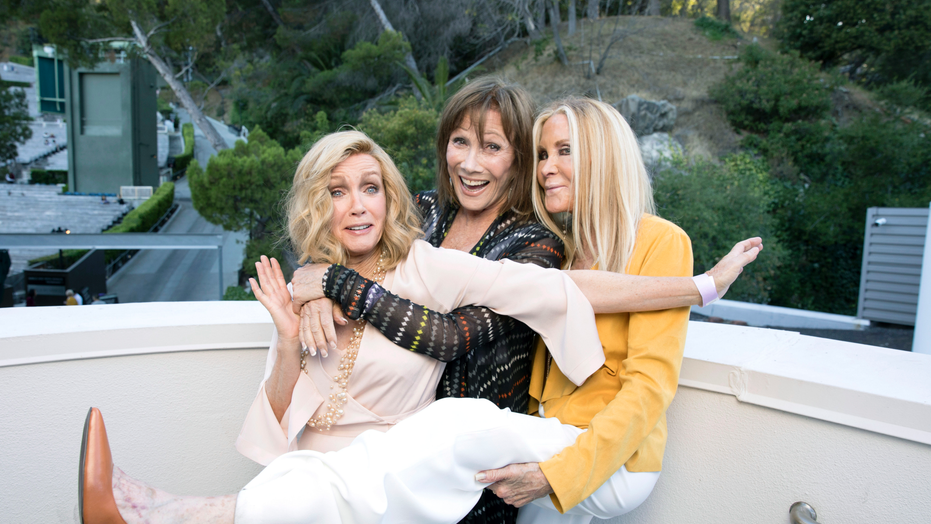 Fox411: 'Knots Landing' star Donna Mills talks about returning to her comedic roots, and landing the role of Abby Cunningham.

LOS ANGELES – In Hollywood, when a formula proves itself to be successful, it's often replicated or developed into a different property. Such was the case with “Knots Landing,” a spinoff of the wildly popular television series “Dallas” that premiered in December 1979 and ran for 14 seasons and 344 episodes before its ending in May 1993.

The series' three leading ladies – Donna Mills, 79, Joan Van Ark, 76, and Michele Lee, 77 – captured the hearts of women in households throughout America and ushered in a new way of storytelling that allowed mothers and women of different backgrounds to connect.

LUCILLE BALL WOULD BE 'ELATED' FOR WOMEN IN HOLLYWOOD, BUT 'DISAPPOINTED' IN COMEDY OFFERINGS ON TV, FRIENDS SAY

However, what ballooned into a tribute-worthy series with a history all its own began as a confusing concept that some within the cast couldn't grasp, at least initially.

“I went on the show in the second year and I didn't... I had never seen the show. I thought it was a show about a houseboat with Andy Griffith,” Mills told Fox News exclusively on Saturday night at the 40th-anniversary lobby tribute at the famed Hollywood Museum in Los Angeles.

“But then, when I got on the show, I said, 'This show could be really good,'” she continued.

“It was not serialized at that point. They did a separate episode every week, and I said to them, I said, 'You gotta put a hook at the end, and get them back next week.' And, they ended up doing that and that's when the show started to really blossom and really take off.”

Michele Lee, who played Karen on “Knots,” told Fox News she's most proud of the show's overall ability to pivot with the times. She also enjoyed the “everyday people” dichotomy of its existence.

'THE YOUNG AND THE RESTLESS,' GENERAL HOSPITAL' STARS DISH ON WHY SOAP OPERAS REMAIN SO POPULAR IN 2019

“That show had a wonderful sense of humor about it, as well as... a pretty good look at a world and America as it changed,” Lee said. “I always like to say that we changed as America changed. And so, it wasn't about rich people up on a hill and our need to be wealthy, right, it was everyday people – except for maybe some of us,” she quipped. “But, everyday people living around a cul-de-sac, loving our neighbors and hating our neighbors.”

Lee came clean and admitted that at first glance she also wasn’t sure of the direction the show was readying itself to take. However, she noted that paying attention to the characters in “Dallas” helped her compartmentalize the role she ultimately played. Lee said off the bat, she wasn’t sure she could even play Karen but made a point to note the character’s transcendent personality, which showcased her as a strong woman.

“At first I didn't know what the h--- the show was about,” she explained when asked if she had reservations going in about the show’s chances of success. “And then, when I read it, I thought, 'Oh, I don't know if I could do this. This woman is just so out there.' She's banging down doors and being rather 'ridiculous' in the way she's handling the world around her.'”

Lee maintained: “But then, I saw 'Dallas,' and I thought, oh, that's what it's about. It's like 'Dallas,' except we weren't, because we were more everyday people. And certainly, my character was really... she was someone who was so right about the place women were, or should be in the world, that she was the Rock of Gibraltar of the show and it was one of the things that I loved about my character.”

The ladies of Seaview Circle saw their show as one worthy of recognition 40 years after its first episode aired. When asked about its ability to connect with its audience, the consensus was unanimous – “Knots Landing” managed to do it on a level that changed the course forever.

“I'll tell you, when there's relatability in a show where they say, 'Hey, that's just like...' – 'This Is Us' right now is doing it,” Van Ark compared. “It's the relatability that maybe people didn't relate as well to 'Dallas,' which was a wonderful, incredible, iconic show. But, with 'Knots Landing,' there was many storylines and many fights and many marriages and dates – family dynamic on a different level... and it was rich, it was deep and relatable, and that's why it went so long.”

“What's so great right now is that the 'Housewives'... the ensemble shows with ensemble women is coming to the forefront,” she added.

“'Knots' did that way back when. But, we were ahead of our time and it still works and it works even better now because women are becoming empowered and getting equal pay for equal work.”