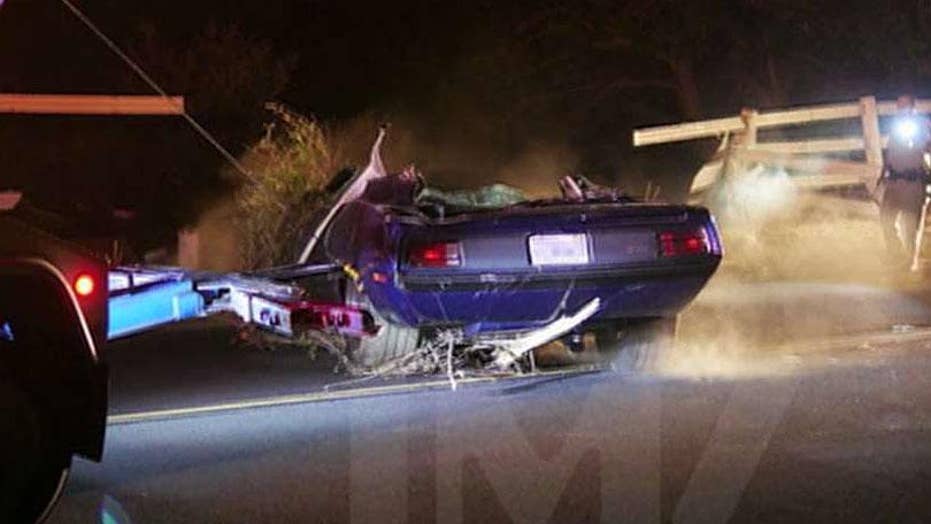 Actor Kevin Hart's wife says the star is doing 'great' after suffering a back injury when his car flipped off California's Mulholland Highway; Christina Coleman has the latest.

Kevin Hart’s wife, Eniko, gave an update on the star’s condition following a car accident over the weekend that left him hospitalized with a back injury.

The “Jumanji” star, 40, suffered a “major back injury” according to a California Highway Patrol collision report after his 1970 Plymouth Barracuda drove off Mulholland Highway and rolled down an embankment Sunday night. Hart was in the passenger seat at the time. The driver, 31-year-old Rebecca Broxterman, was determined not to have been intoxicated at the time of the collision.

TMZ reporters caught up with Hart’s wife after she appeared to have gone on a coffee run at the hospital.

She explained that Hart is awake, but not lively and joking around just yet. However, he's in good spirits.

Kevin Hart is reportedly in good spirits and expected to be just fine after serious car accident. (Photo by Jordan Strauss/Invision/AP, File)

Sources tell the outlet that doctors completed a successful back surgery on Hart Sunday evening. He is reportedly expected to stay in the hospital for a few more days while he recovers so that doctors can keep an eye on him.

KEVIN HART GETS SUPPORT FROM DWAYNE 'THE ROCK' JOHNSON, OTHER CELEBRITIES AFTER CAR ACCIDENT

The CHP report says the car immediately went out of control as it turned from a canyon road onto the highway. Pictures from the incident show the vehicle’s roof almost completely crushed in from the impact.

TMZ previously reported that Hart was the first to get out of the vehicle after the crash where a member of his security team reportedly picked him up in an SUV. He was reportedly taken to his nearby home for medical treatment before he checked himself into a hospital where he remains at this time.