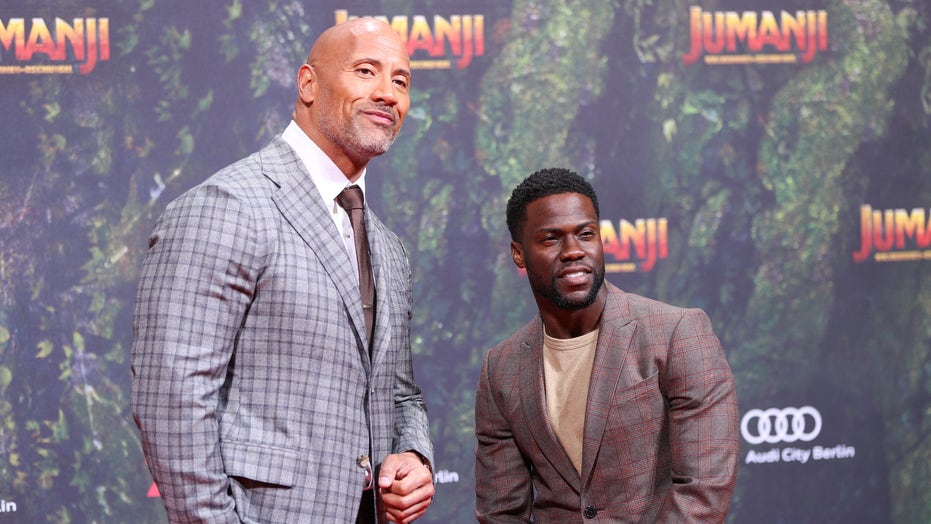 Celebrities are sharing their love for Kevin Hart after the actor was injured in a car accident over the weekend, including his social media rival, Dwayne “The Rock” Johnson.

Hart, 40, was a passenger in a 1970 Plymouth Barracuda that went off Mulholland Highway and rolled down an embankment around 12:45 a.m. Sunday, according to California Highway Patrol

The report says Hart and the driver, Jared Black, 28, both suffered "major back injuries" and were taken to hospital.

Another passenger, 31-year-old Rebecca Broxterman, only complained of pain. The driver was reportedly not under the influence of alcohol.

Johnson, who starred with Hart in the films “Central Intelligence” and two “Jumanji” movies, typically uses his social media to take playful shots at his co-star, often joking about his height. For example, Johnson shared a photo of his newborn baby with Hart’s face photoshopped onto it.

However, the “Hobbs and Shaw” actor got serious on Instagram Monday, posting a note for the actor to get well after his scary accident.

“Stop messing with my emotions brother @kevinhart4real. We have a lot more laughing to do together. Love you man. Stay strong,” he wrote over a picture of them on the set of the latest “Jumanji” film.

Johnson isn’t the only celebrity to send well wishes to Hart after the incident. “Brooklyn Nine-Nine” star Terry Crews took to Twitter to share an article about the star.

“Get well soon, brother,” he wrote.

“Breaking Bad” star Bryan Cranston, who worked with Hart on the movie “The Upside” took to Instagram to write: “I’ve just heard that @kevinhart4real was injured today in a car accident in Los Angeles. Let’s all send him positive energy and healing thoughts. He’s a good human. Get well soon, brother. B.”

“Just heard that @kevinhart4real was in an accident today and was seriously injured. This man brings so many people smiles, laughter and positivity energy every day. Let’s send him some too #GetBetterKevin,” Iglesias wrote.

“The car can be replaced. But the comedy world could never replace @kevinhart4real!” Hall noted.

“Prayers up for @KevinHart4real,” said Funches.