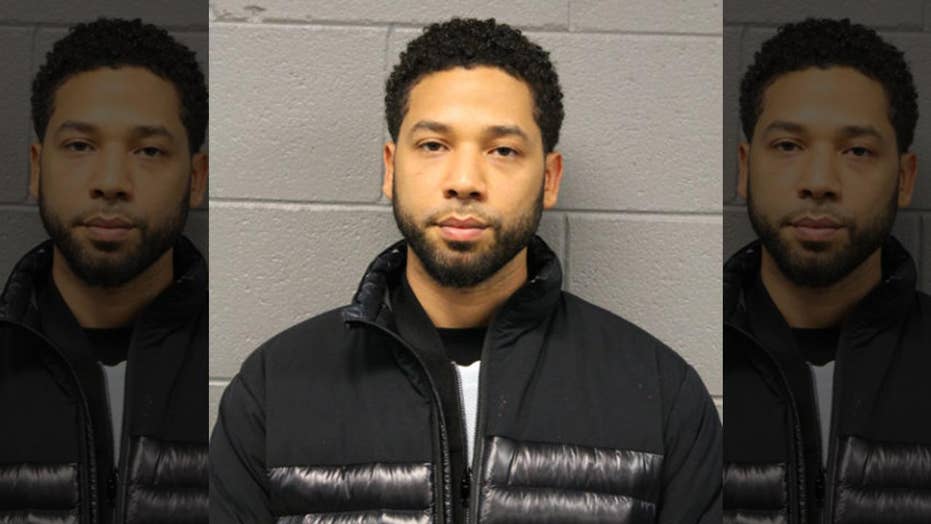 Jussie Smollett's celebrity supporters have remained largely silent following the 'Empire' star's arrest Thursday morning for 'filing a false police report.' While most have chosen to not say anything, a handful have began to backtrack and even delete relevant posts. While the case is still continuing to develop, here's a look at some celebrity reactions.

When "Empire" star Jussie Smollett revealed he was hospitalized as a result of what he claimed to be a vicious racial and homophobic attack by two men in late January, tributes from celebrities poured in. But as details of the alleged Chicago incident unfolded and police declared Smollett a "suspect" in his own criminal investigation, stars suddenly fell silent.

After Smollett was arrested Thursday morning for "filing a false police report," all eyes were on his former celebrity supporters who initially demanded justice and used the actor's photo to spread their message.

While the majority remained mum on the issue, a handful began to backtrack and even delete their Smollett-related posts — as the current narrative didn't appear to support their earlier anti-Trump and anti-police messages.

“Celebrities, news commentators and even presidential candidates weighed in on something that was choreographed by an actor."

Chicago police Superintendent Eddie Johnson slammed celebrities and other well-known figures for making Smollett's "phony attack" national news while other Chicago families struggle with gun violence every day in one of the nation's most crime-ridden cities.

“Celebrities, news commentators and even presidential candidates weighed in on something that was choreographed by an actor,” Johnson argued, according to Deadline, though he later added he would continue to pray for the "troubled young man."

As developments in the case continue, here's a look at celebrity reactions.

Actor and comedian Tyler Perry has continued to stick by his pal Smollett, whom he says he's "personally spoken" with since the alleged attack.

"He is adamant that he’s telling the truth. Also, everyone that I know who knows him says that he is not the kind of person who would make up such a horrible and awful thing," Perry explained in a Thursday Facebook post, though he admitted the "evidence seems to state otherwise."

"I’m lost for words. To stoke fears and raise racial tensions is wrong in every situation on ALL SIDES! Yet my prayers are still with him and his family and our Nation. CAN WE PLEASE STOP THE HATE!" Perry added.

Actor Patton Oswalt tweeted a profanity-laced tweet in response to President Trump's tweet calling out Smollett. Trump tweeted, "what about MAGA and the tens of millions of people you insulted with your racist and dangerous comments?"

Oswalt then replied, "Way to go Jussie. You just handed this racist dips--t a 'Get Out Of Race-Baiting Free' card that he's gonna wave around like a soiled diaper until he's re-elected."

She added that since she hasn't been on the show "in over a year" she has been "very separate from the whole thing for a while."

"I have to get off Twitter. This story is pathetic. All of it," he added.

He later added, "THIS IS F---ED UP TO THE CORE. CATCH THESE EVIL HOMOPHOBES AND LOCK THEM UP FOREVER."

"I stand by what I say always. I felt for him when the attack happened and the current reports have made me feel like I was being played. Straight up," he wrote early Thursday following reports that authorities approved felony criminal charges against the "Empire" star.

CNN'S VAN JONES COMPARES JUSSIE SMOLLETT TO JACKIE ROBINSON: 'THIS IS THE FALL OF AN ICON'

When Smollett was officially classified as a suspect, Jackson Jr. appeared to be shocked, tweeting, "Nooooo waaaaaaaaay!!!!!!!"

Michael Ian Black cracked a joke about the incident. (AP)

Comedian Michael Ian Black cracked a joke about the Smollett investigation on Thursday.

"On the positive side, now I know who Jussie Smollett is," he joked, as dozens of fans began to weigh in.

The lighthearted tone is in sharp contrast to a tweet he shared from activist DeRay Mckesson on Jan. 29 — when the alleged attack occurred.

"I don’t really have a lot of words. Jussie is an amazing man. This is horrible. Homophobia is dangerous. F--k MAGA. #WeLoveJussie," Mckesson said in a tweet, which Black posted on his account.