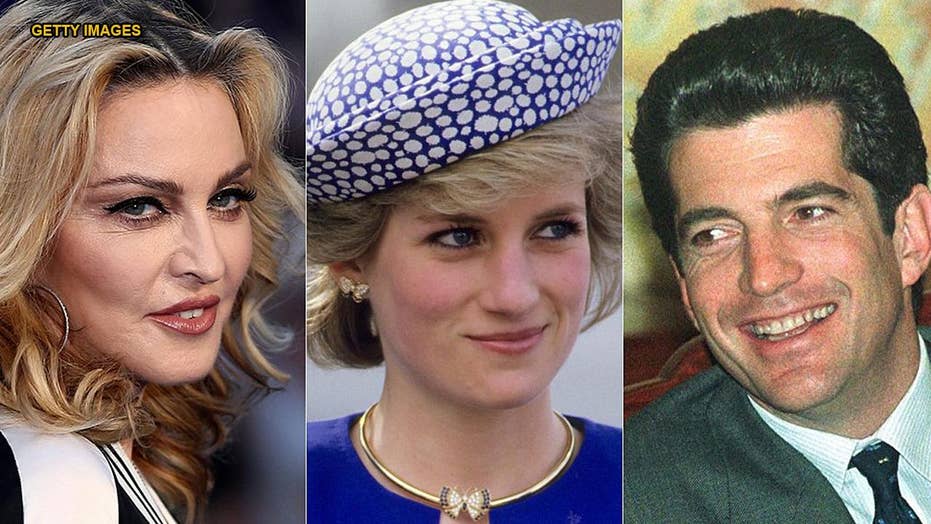 Princess Diana and Madonna both turned down offers from JFK Jr. to appear in George magazine

According to his friends and colleagues, John F. Kennedy Jr. was turned down by both Madonna and Princess Diana, when he asked them to appear in his magazine publication George. Kennedy had suggested Madonna, who famously portrayed his late father's reported mistress Marilyn Monroe in her 'Material Girl' music video, pose as his mother, former first lady Jackie Kennedy Onassis.

John F. Kennedy Jr. once tried to get Madonna to pose as his mother Jackie Kennedy Onassis on the cover of his George magazine — but the Material Girl was quick to turn him down.

The Hollywood Reporter published a lengthy oral history on Tuesday detailing how the late president’s son attempted to get A-listers and royalty to appear on his publication.

“There were always things that we’d think he was going to be weirded out about but he wasn’t,” explained Berman. “He wanted to do a cover about his mother. Something about telling the truth, it was his idea. He wanted somebody dressed like his mother sitting on a pile of every book that’s ever been written about her. And I was like, ‘It sounds great, but we don’t need the books.’”

“He called Madonna and asked her to do it,” continued Berman. “We were like, ‘Holy s---, you’re going to see Jackie Kennedy on the cover with the sunglasses and the hair and then you’re going to look again and it’s Madonna.”

Madonna, who allegedly had a fling with Kennedy in 1988, refused.

“He faxed Madonna a note,” said executive assistant Rosemarie Terenzio. “And she called, I remember she left a voicemail. ‘Hi, it’s Madonna calling for John. I don’t know if this is the right number, but this is the number that he gave me’ — clearly annoyed that she was in voicemail.”

“So he told her the idea, and she faxed a note back. It said, ‘Dear Johnny Boy’ – because she loved to f--- with him – ‘Thanks for asking me to be your mother, but I’m afraid I could never do her justice. My eyebrows aren’t thick enough, for one.'”

According to Terenzio, Madonna suggested she might be a better fit to pose as Adolf Hitler’s wife.

“When you want me to portray Eva Braun, I might say yes,” Madonna quipped.

And the pop star wasn’t the only icon to turn down Kennedy. Terenzio revealed the former first son was also turned down by Princess Diana.

Princess Diana arrives at the Royal Geographical Society in London for a speech on the dangers of landmines throughout the world June 12, 1997. — Reuters

“We wanted to put Princess Diana on the cover,” she explained. “There were all these calls back-and-forth; she was in town and staying at the Carlyle [in New York City]. I can’t remember who hatched this scheme that he should go in disguise. We were laughing and carrying on, ‘Oh, go in as this’ or ‘go in as that.’ And finally, he was like, ‘I’m not going anywhere in disguise, that’s the stupidest thing ever.” It just wasn’t him.”

“He had tea with her,” Terenzio continued. “When he came out, I said, ‘Well, how was she?’ And he’s like, ‘She’s tall, taller than I thought. She’s very nice, shy, a little coy. But she’s not going to do it.’ At the end of the day, all he cared about was getting a yes to the cover of George. Everything else was kind of, whatever.”

“When Diana died, I remember calling him at home and saying, ‘We’re going to have to do something.’ And he said, ‘Yeah, OK, we’ll talk about it.’ So I called a meeting to discuss it. He just didn’t come — he wasn’t showing up on time, which he normally would never do. We kept delaying, and finally, he came in and said, ‘I can’t do it right now, I need to clean my office.’

“It was obvious he was having an emotional response to the tragedy and finding it difficult. He kept saying, ‘I don’t see why this needs to be a story.’ In the end, we did this incredible photo essay of the mourning going on in London.”

This July will mark 20 years since Kennedy, his wife Carolyn Bessette and sister-in-law Lauren Bessette died in 1999 after the aircraft he was piloting crashed into the Atlantic Ocean off Martha’s Vineyard in Massachusetts. The trio was on their way to Rory Kennedy’s wedding. He was 38.

Back in 2017, Terenzio told Fox News Carolyn was stressed by her husband’s non-stop schedule with George, along with the growing attention from pestering paparazzi when she decided not to attend the family wedding. Instead, she was hoping to take a break. Terenzio said she convinced Carolyn to attend to avoid questions being raised on any reported marital woes the tabloids were clinging onto. Carolyn would go on that fatal flight, which haunted Terenzio for years.

“It was very difficult,” Terenzio admitted. “It took time for me to get back up and figure out what I wanted to do next… there was a lot of trial and error.”

Terenzio chronicled her memories with Kennedy in the 2012 memoir “Fairy Tale Interrupted,” which helped her cope. Today she is the founder of a publicity firm. And while Terenzio’s career continues to flourish, she still thinks of her friends and what could have been.

“I don’t think he felt any pressure or felt any burden [to pursue politics] because of his name,” she said at the time. “I think he saw it as a wealth of opportunity. And that he was very lucky. He thought about it. He certainly talked about running for office, but his priority was to make George a success.”