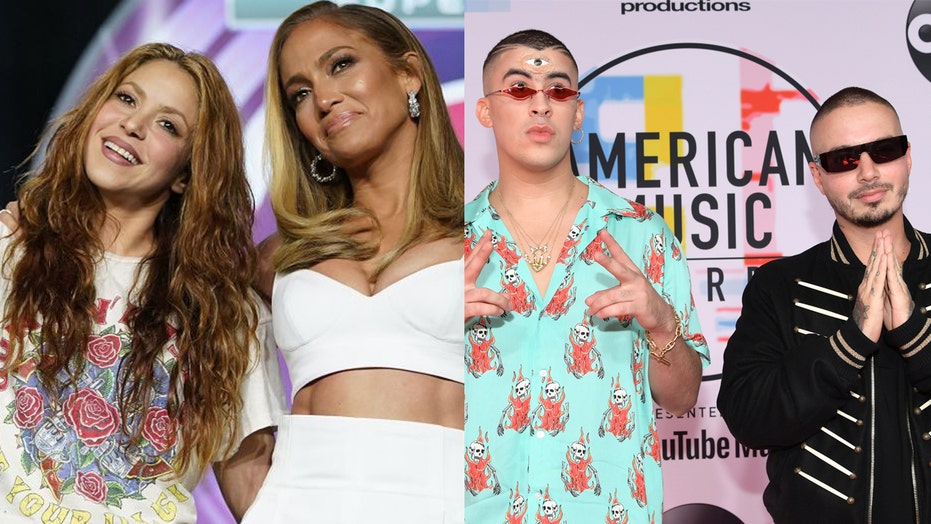 The two artists, headlining a show meant to celebrate Latino culture, will bring fellow Latino artists J Balvin and Bad Bunny on stage during their performance, according to Page Six.

Lopez's 11-year-old daughter Emme will also reportedly join in on the performance, as well, after performing on stage with her mother in June 2019.

Bad Bunny recently released a song called "6 rings," which ends with a recording of the late Kobe Bryant saying, “From the bottom of my heart, thank you. And what can I say? Mamba out,” before a crowd cheers Bryant's name.

The song also makes mention of Bryant's five championship rings -- the sixth ring being his wedding ring -- but Page Six's sources weren't able to confirm whether the Spanish-language song would be performed at halftime.

It was confirmed just days ago that the halftime show would contain a tribute to Bryant, who passed away a week ago in a tragic helicopter accident.

In a news conference on Thursday, Shakira, 43, said: "Life is so fragile. And that's why we have to live every moment as intensely as we can.

“And I think we'll all be remembering Kobe on Sunday," she continued. "And we'll be celebrating life and celebrating diversity in this country. I'm sure he'll be very proud to see the message that we're going to try to convey onstage.”

According to Billboard, Lopez, 50, said it will be a "heartfelt" moment when they remember Bryant.

As for the rest of the show, Page Six reported that Shakira will open the show with songs including "Hips Don't Lie" and "Whenever, Wherever" before Bad Bunny joins her.

Reportedly, Lopez will then take the stage to perform hits such as "Waiting for Tonight" before being joined by J Balvin and Emme.

The headliners will then unite to perform a mashup of "Waka Waka" and "Let's Get Loud."