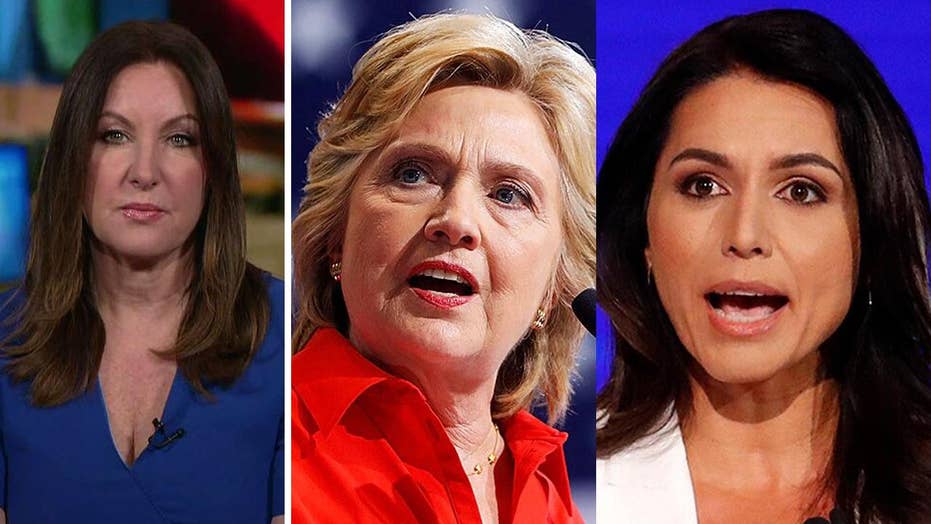 Leslie Marshall: Why the Hillary Clinton-Tulsi Gabbard feud is a gift to Trump

Fox News contributor Leslie Marshall on why the escalating feud between Rep. Tulsi Gabbard and Hillary Clinton is becoming good news for President Trump, may actually be good news for Rep. Gabbard, but is increasingly harmful to the Democratic party as a whole.

"The View" co-host Abby Huntsman said on Tuesday that former Democratic presidential nominee Hillary Clinton was playing into Russia's hands when she suggested that Rep. Tulsi Gabbard, D-Hawaii, was an asset of the Kremlin.

"I don't like when Hillary Clinton does it to Tulsi Gabbard," co-host Meghan McCain said on Tuesday. The panel was discussing whether people should be able to question military service members' loyalty to the U.S.

Their comments came after Clinton claimed that Russians were "grooming" an unnamed presidential candidate. “I'm not making any predictions but I think they've got their eye on somebody who is currently in the Democratic primary and are grooming her to be the third-party candidate,” Clinton previously said.

“She's the favorite of the Russians. They have a bunch of sites and bots and other ways of supporting her so far,” Clinton said.

Gabbard herself attacked The New York Times and CNN for featuring content suggesting that she was an asset of Russia.

"Just two days ago, The New York Times put out an article saying that I'm a Russian asset and an Assad apologist and all these different smears," she said during the fourth Democratic debate. "This morning, a CNN commentator said on national television that I'm an asset of Russia — completely despicable."

Gabbard has been one of the few, high-profile politicians to support President Trump's decision to pull U.S. troops out of Syria, a move that critics said would give Russia more power in the region.