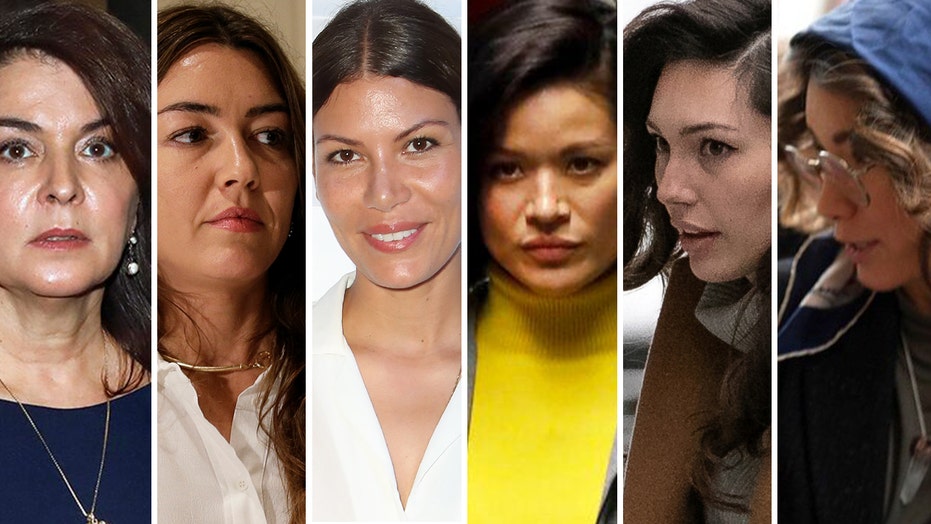 Six women out of the more than dozens of women who have accused Harvey Weinstein of vile sexual behavior have testified over the last two weeks at his rape trial in New York City.

Their testimonies were allowed in court despite most of them not being the subject of the actual charges against the disgraced movie mogul, allowing the prosecution to establish a pattern of lewd and violent sexual behavior by Weinstein.

Weinstein, 67, is charged with raping Jessica Mann in March 2013 and forcibly performing oral sex on Mimi Haleyi in 2006.

He maintains that any sexual encounters were consensual, and his defense attorneys have pointed to friendly communications and sexual encounters with Weinstein after the alleged assaults as proof that the women were willing participants. Weinstein could spend the rest of his life in prison if convicted.

Witness Jessica Mann arrives at the Manhattan Criminal Court to testify in the trial of Harvey Weinstein in New York, US., February 4, 2020. REUTERS/Jeenah Moon - RC2PTE9OEDT4

Jessica Mann says she was raped in a New York City hotel room in 2013 and again at a Los Angeles hotel eight months later when she was about 27 years old.

In regards to the New York incident, Mann testified that Weinstein trapped her in the room and allegedly angrily ordered her to undress as he loomed over her, then raped her.

A second attack came eight months later at a Los Angeles hotel, where she worked as a hairdresser after she told Weinstein that she was dating an actor, she said.

“You owe me one more time!” she claimed he screamed at her. She said she begged him not to take off her clothes, but he said, “I don’t have time for games,” and allegedly ripped off her pants before pushing her legs apart and raping her.

Mann, now 34, testified for three days -- longer than any other accuser -- and broke down in tears on the stand as she was cross-examined by the prosecution, who tried to paint her as a manipulator who wielded sex and flirtation to gain access to stardom through Weinstein.

The emotional testimony prompted the judge to cut short a day in court and send jurors home early.

“He is my rapist,” she told jurors definitively.

Mimi Haleyi's accusations are the basis of the sexual assault case against Weinstein in New York. She says he forcibly performed oral sex on her at his apartment in 2006 when she was about 28 years old.

Haleyi, now 42, says the incident occurred after Weinstein got her a job as a production assistant on the Weinstein-produced “Project Runway.”

“I was kicking, I was pushing, I was trying to get away from his grip," she testified. "He held me down and kept pushing me down to the bed.” She told jurors she thought she was being raped and wondered, “If I scream rape, will someone hear me?”

Haleyi said she and Weinstein had sex at a hotel two weeks later but didn't think Weinstein forced her into the encounter, despite not wanting to do it, she said. Weinstein's lawyers have suggested that episode is evidence he didn't coerce her during the first encounter, either.

In the months leading up to the alleged assault, Haleyi says Weinstein asked her to give him a massage in a hotel room during the Cannes Film Festival. She said he also insisted she go with him to the Paris fashion shows, which she repeatedly declined.

Annabella Sciorra says she was raped at her own apartment in late 1993 or early 1994 when she was about 27 years old.

Sciorra, now 59, testified that she attended a dinner with actress Uma Thurman and other industry figures and that, afterward, she went back to her apartment. It was then that she alleges Weinstein barged in and raped her.

"I was punching him. I was kicking him. I was just trying to get him off of me," she said, describing how he pinned her down on a bed. She said Weinstein overpowered her, seizing her hands and holding them over her head, and raped her.

“I didn’t have very much fight left inside me,” Sciorra testified. “My body shut down. It was just so disgusting that my body started to shake in a way that was very unusual. I didn’t even know what was happening. It was like a seizure or something.”

When she ran into him about a month later and confronted him about what had happened, he said, “That’s what all the nice Catholic girls say," she testified.

Then, she said, he leaned toward her and said menacingly: “This remains between you and I.”

“I thought he was going to hit me right there,” Sciorra said.

Tarale Wulff says she was raped at Weinstein's apartment in 2005 when she was 28 years old.

In a tearful testimony, Wulff told jurors that the famous producer lured her to his apartment under the guise of auditioning for a movie role and forced himself on her.

She said he was much larger than her and overpowered her and she froze, thinking that would make it “easier to get through, to get past it.”

Wulff, who'd met Weinstein at the members-only club, said she froze and scooted around him to go back to the bar.

Dawn Dunning arrives at Famous' Post-Show Talkback Panel - The Truth Is Exposed, Now What? (Photo by Ari Perilstein/Getty Images for Famous by The 11:11 Experience)

Dawn Dunning says she was raped in a hotel suite in Manhattan's SoHo neighborhood in 2004 when she was 23 years old.

Dunning, now 40, said she met Weinstein when she was a waitress at a ritzy nightclub in Manhattan.

She testified that during what was supposed to be a business meeting with the famous movie mogul, he put his hands up her skirt and fondled her genitals, telling her not to "make a big deal about this."

On another occasion, Dunning agreed to meet Weinstein at a cigar bar, but instead, his assistant took her to a suite where he was standing in a bathrobe.

“You’ll never make it in this business, this is how this industry works,” Weinstein allegedly told her when she refused.

Lauren Marie Young says Weinstein stripped naked, groped her breast and masturbated in the bathroom of his Beverly Hills hotel room in 2013 when she was 23 years old.

Young, now 30, said Weinstein's friend, a Mexican model, shut the door to the bathroom before Weinstein raped her and that the incident occurred days before the Oscars in February 2013. Her allegations are the subject of a criminal charge filed against Weinstein in California on Jan. 6, just as his New York trial was getting underway. He isn't charged in New York in connection with his dealings with Young.