An actress told jurors in a New York City court Wednesday that disgraced movie mogul Harvey Weinstein put his hands up her skirt during a meeting in his hotel suite in 2004, when she was 24 years old, and fondled her genitals before urging her not to "make a big deal about this."

Dawn Dunning, now 40, said she met Weinstein when she was a waitress at a ritzy nightclub in Manhattan.

Weinstein immediately appeared to take an interest in her fledgling acting career, she said, and invited her to a lunch meeting where -- noting his infamous temper -- she said he was “on the phone a lot yelling at people.”

After several meetings with him, she said she was alone with Weinstein for a movie audition in a hotel suite he was using as a temporary office space in Manhattan's SoHo neighborhood when he fondled her by reaching up her skirt.

“I stood up. I was in shock,” Dunning testified, fighting back tears. “He just started talking really fast. He said, ‘Don’t make a big deal about this. It will never happen again.’”

Dunning said she “just kind of gave him the benefit of the doubt" when Weinstein said it wouldn't happen again. She said she didn't scream or yell and didn't tell anyone because she was embarrassed and didn't want to be a victim.

She said that on a separate occasion, she agreed to meet Weinstein at a cigar bar, but instead, his assistant took her to a suite where Weinstein was standing in a bathrobe. 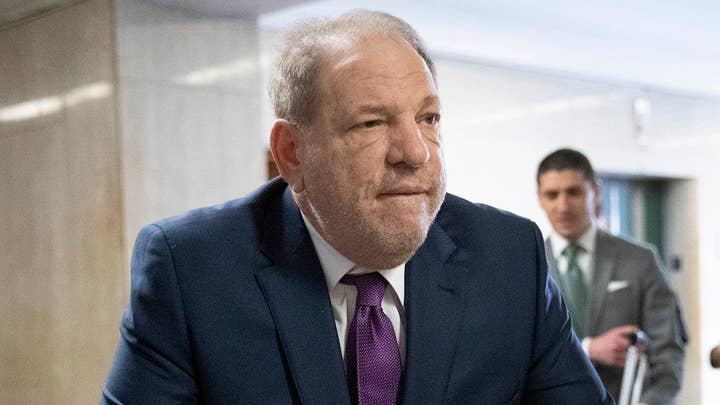 “When he said that, I kind of laughed, I thought he was kidding, and he had kind of a crass sense of humor," Dunning testified. “But when I started laughing, he got really angry and started screaming at me. He said, 'You'll never make it in this business, this is how this industry works.'"

She said Weinstein name-dropped actresses such as Salma Hayek and Charlize Theron, implying they had done similar things to achieve success -- something both women have strongly denied.

Another alleged Weinstein victim, Tarale Wulff, also choked back tears as she testified that the famous producer nearly 15 years her senior raped her at his apartment in 2005 when she was auditioning for a movie role.

She said he was much larger than her and overpowered her and she froze, thinking that would make it “easier to get through, to get past it.”

Wulff, who'd met Weinstein at the members-only club, said she froze and scooted around him to go back to the bar.

Both women's testimonies -- which are not part of the criminal indictment against Weinstein -- were allowed as prosecutors hope to establish a pattern of lewd and abusive behavior by Weinstein.

Attorneys for Weinstein, 67, have built their defense of him by poking holes in the women's memories and questioning why they didn't report the incidents earlier.