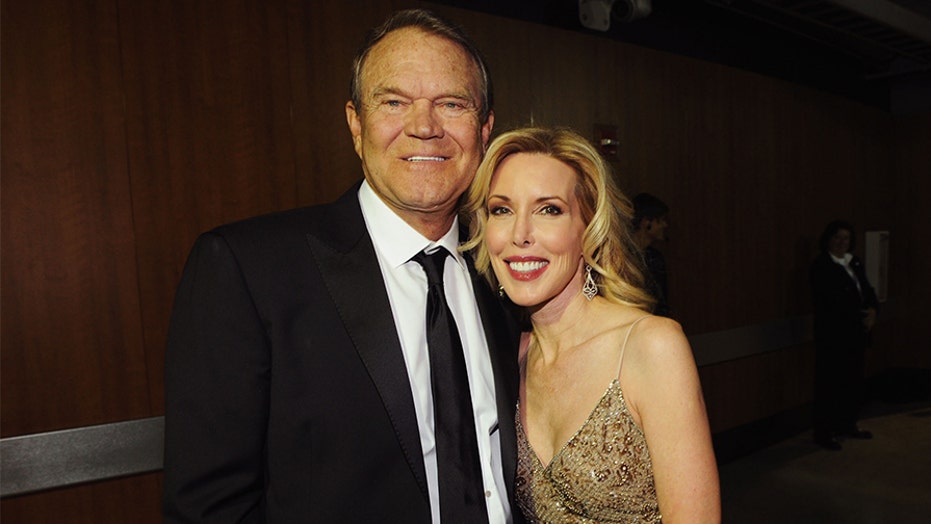 Kim Campbell, the widow of country music star Glen Campbell, isn't holding back in her new tell-all book, "Gentle On My Mind: In Sickness and in Health with Glen Campbell."

She details the couple's 35-year marriage, including his drug and alcohol addiction issues, the time he pointed a gun at her, and how she cared for him after his heartbreaking Alzheimer's diagnosis.

Glen died on Aug. 8, 2017, after a six-year battle with the disease. He was 81 years old. Kim writes in her book that Alzheimer's robbed "both of us of our memories," according to the Daily Mail.

The couple met on a blind date but the night quickly turned dark when Glen got drunk and wanted to '"jump her bones," per the outlet. She writes the Grammy-winner "turned into a big fat toad and turned vulgar."

In fact, "every night he drank himself unconscious," Kim said. According to the Daily Mail, one night while touring, the "Rhinestone Cowboy" singer locked himself out on the balcony of his hotel room and was too intoxicated to let himself back in.

Glen Campbell and wife Kim Woolen pose for a portrait circa 1993 in Tucson, Arizona. (Photo by Aaron Rapoport/Corbis/Getty Images)

She says that Glen would become enraged if she questioned him about his addiction issues. Per the outlet, one night during "a crazed drunken rage," he pointed a gun at her.

Kim writes that after their first child was born, he went to the Betty Ford Center to sober up.

In 2009, Glen was diagnosed with mild cognitive impairment after he started forgetting lyrics and would become confused. He suffered from acute paranoia and thought someone was breaking into his house to steal items. One night, Kim writes, Glen forgot how to get home.

Eventually, Glen forgot who Kim was. "Alzheimer's robs people of their lives while they are still living with them, and robs families of the people they love while they are still standing in front of their eyes," she said. "We need to find a cure for this...so much pain should not exist in the world."

As the disease progressed, Glen became aggressive with Kim. "His diminishing ability to reason and comprehend language made any effort to correct him potentially dangerous," she explained.

Glen's music career spanned six decades and he sold more than 45 million records. He was married three other times and is survived by five sons and three daughters.