Actress Felicity Huffman gets 14 days in prison, 250 hours of community service, one year probation and a $30,000 fine for her role in the college admissions scandal.

Actress Felicity Huffman was sentenced Friday to 14 days in prison and a $30,000 fine for her role in a sprawling college admissions scandal involving rich and famous families who funneled cash to fixers in order to get their kids into the nation's most prestigious colleges and universities.

Huffman, 56, must self-report to a facility chosen by the federal Bureau of Prisons on Oct. 25. She also received one year of probation and ordered to perform 250 hours of community service.

"I think this is the right sentence here," U.S. District Court Judge Indira Talwani told Huffman. "You can move forward and rebuild your life after this. Without this sentence, I think the community around you would ask why you got away with this." 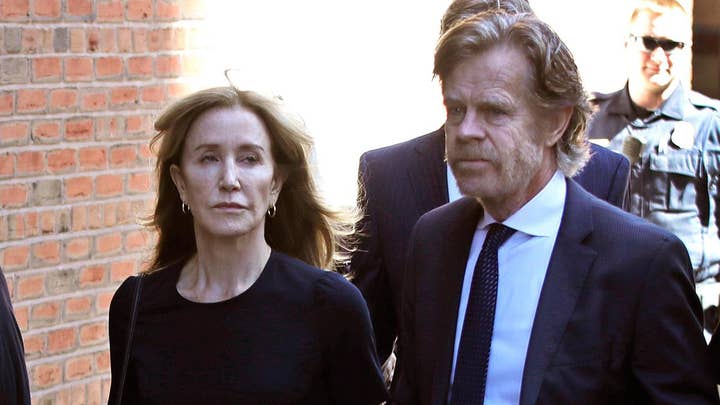 A tearful Huffman had addressed Judge Talwani in Boston federal court before she received her sentence.

"I'm sorry to you, judge. I am deeply sorry to the students, parents and colleges impacted by my actions," the Emmy-award winning actress confessed. "I am sorry to my daughters and my husband. I have betrayed them all.

Huffman, 56, had pleaded guilty to one count of conspiracy to commit mail fraud and honest services mail fraud in May. She confessed to paying an admissions consultant $15,000 to have a proctor correct her older daughter's answers on the SAT. She considered the same for her younger daughter but decided against it.

Camera crews were camped outside the Boston courthouse all day on Friday. Wearing a navy dress, the former "Desperate Housewives" star arrived at court shortly after 1:30 p.m., accompanied by her husband, the actor William H. Macy. Both ignored the assembled reporters' shouted questions. The actress appeared calm while going through security, smiling and thanking attending law enforcement. Once in court, Huffman sat straight-backed beside her attorneys and leafed through a stack of documents.

Actress Felicity Huffman was among 51 people charged in a scheme in which prosecutors say wealthy parents paid an admissions consultant to bribe coaches and test administrators to help their children get into prestigious colleges. (Photo by David L. Ryan/The Boston Globe via Getty Images)

Assistant U.S. Attorney Eric Rosen argued on behalf of the government that Huffman deserved to go to jail.

"She told you this crime resulted from the bewilderment of being a mom," he told Judge Talwani. "With all due respect, welcome to parenthood. It's terrifying and stressful. What parenthood does not do, it does not make you a felon. It doesn't make you a cheat.

"This was a purposeful criminal act. The defendant knew it was wrong," Rosen continued. "She even noted an increase [in payment] could trigger an investigation. She mulled it over. She participated in the scheme. She lied to move the test. She called the College Board to make sure the test had been shipped. Happy with the results, she paid Singer $15,000 and considered doing it again.  She sent the scores to colleges nationwide. But for her arrest, she would have succeeded.

"This was not a blunder or mistake. This was intentional, " the prosecutor added. "She showed contempt for the law and should be punished for her actions. Similarly situated defendants should also go to prison for their crime."

Huffman's attorney Martin Murphy contended that probation and a fine were justified in this case.

"Imprisonment is not a default setting," Murphy argued. "Probation would be a deterrent. The consequences she suffered are her own doing.  And she knows that. Her daughter is not going to school next year. The ramifications continue. The consequences are likely to continue. It does not follow that only a sentence of prison will deter others."

Before Friday's sentencing, federal prosecutors had recommended a month of prison time, a $20,000 fine and 12 months of supervised release for the felony.

Huffman was the first of the 51 defendants charged in the sting, dubbed "Operation Varsity Blues" to be sentenced. The actress had previously pleaded for leniency.

In a three-page letter to Judge Talwani filed last week, Huffman wrote she has “a deep and abiding shame” for participating in the scam, saying she was trying to give her daughter, whom she says has a diagnosed learning disability and struggles with math, an opportunity to become an actress.

“In my desperation to be a good mother, I talked myself into believing that all I was doing was giving my daughter a fair shot,” Huffman wrote. “I see the irony in that statement now because what I have done is the opposite of fair. I have broken the law, deceived the educational community, betrayed my daughter, and failed my family."

“Her efforts weren’t driven by need or desperation, but by a sense of entitlement, or at least moral cluelessness, facilitated by wealth and insularity,” the U.S. Attorney wrote in a filing. (AP Photo/Steven Senne)

Her husband — who arrived in Boston with the actress on Wednesday along with her "Desperate Housewives" co-star, Eva Longoria--wrote letters praising Huffman’s character and asking for mercy. Macy claimed that their relationships with their daughters "exploded" after Huffman's arrest in March.

The "Transamerica" star's attorneys recommended one year of probation, 250 hours of community service with an organization that works with at-risk youth in Los Angeles and a $20,000 fine. They claimed that similar cases “almost always” result in probation rather than jail time which is “exceptionally rare.”

In pressing for a tougher sentence, U.S. Attorney Andrew Lelling noted that Huffman has accepted responsibility for her actions — actions Lelling said she knew were wrong, but did anyway.

“Her efforts weren’t driven by need or desperation, but by a sense of entitlement, or at least moral cluelessness, facilitated by wealth and insularity,” his office wrote in a filing. “Millions of parents send their kids to college every year. All of them care as much she does about their children’s fortunes. But they don’t buy fake SAT scores.”

Huffman's bribe is among the smaller ones highlighted by proecutors. "Full House" star Lori Loughlin and her fashion designer husband, Mossimo Giannulli, are charged with paying $500,000 for their two daughters to get into elite universities. Both have pleaded not guilty to charges which include conspiracy to commit fraud and money laundering and are facing maximum jail sentences of 40 years in prison.

U.S. Attorney Andrew Lelling had pushed for one month behind bars, a year of probation and a $20,000 fine, a sentence he said took into account the fact that Huffman has accepted responsibility for her actions. (Photo by Paul Marotta/Getty Images)