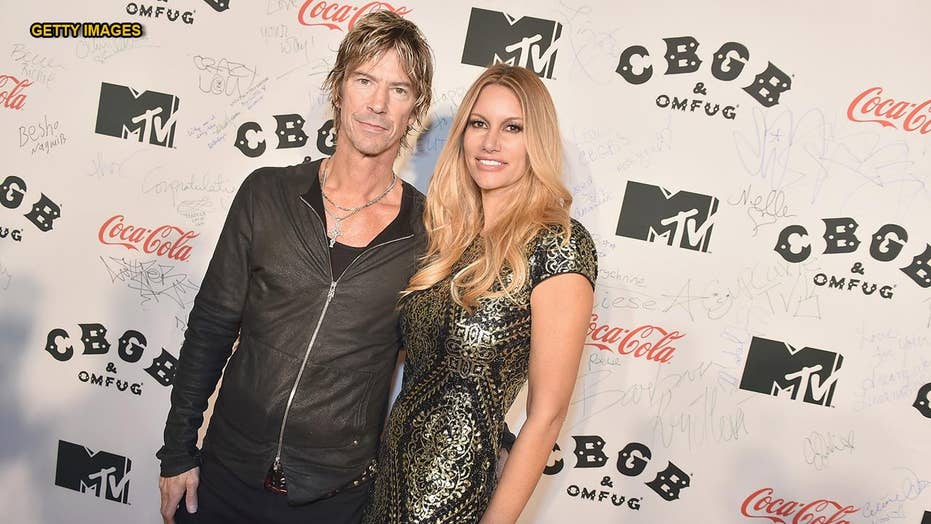 Supermodel Susan Holmes McKagan was set up on a blind date by a friend when she met her future husband, Guns N’ Roses bassist Duff McKagan back in 1996 — and she had some hesitations.

“I guess, like anybody, I had some trepidation,” the 46-year-old told Fox News.  “In fact, when he was calling me on the phone he was like, ‘Can I take you out to dinner?’ … I thought about it and then the next time he called, I said, ‘You know what? How about I pick you up? Instead of you coming to pick me up at my house?’ Because I don’t know, I wasn’t sure what to expect. I [didn’t] know if I wanted to have this guy have my address. It’s just funny looking back because he’s far from that. He’s a true gentleman.”

Twenty years later, McKagan said she got plenty of inspiration from her whirlwind rise to fame and sizzling personal life for her first novel, titled “The Velvet Rose,” which hits bookstores on April 16. She described it as a “coming of age” page-turner set in the ‘90s, when her high fashion world collided with her husband's rock 'n' roll cosmos.

“You really feel like you’ve dropped in on these people’s lives and you feel like you really know them,” explained the cover girl. “They have big personalities and… they’re just characters. … They’re kids basically. So they’re going to make a lot of mistakes. It makes for a lot of excitement, drama, intrigue, scandal and humor. You’re rooting for them at the same time. I think readers will especially enjoy that aspect of it. And I mean, who better to tell you that than someone who has lived that life?”

McKagan has carved out her own successful career as a sought-after model, designer and writer. Still, McKagan is frequently asked what’s it like being married to a rock star. Thankfully, she’s an open book.

The couple tied the knot in 1999 and share two daughters. Looking back, McKagan said it was difficult not to resist the charismatic musician who instantly fell head over heels for her.

“I thought he was extremely good looking,” she gushed. “He was so cute and very in shape. Some of these rock guys, you… don’t know what to expect. He was newly sober and looked really healthy and fit. You could see he had been working out. And I don’t know. He had this twinkle in his eyes. I say he has these smiling Irish eyes… We just had sparks flying… We basically have been inseparable ever since.”

Another question McKagan is frequently asked about the now-55-year-old rock star is how she deals with groupies. The subject alone makes her chuckle. She insisted that trust has been one of the many secrets behind their lasting union in Hollywood.

“He was raised by a large family of eight,” she explained. “He’s the youngest, so he always says, ‘My sisters would have kicked my ass if I misbehaved or didn’t treat other women kindly.’ … You need trust and respect. It takes work. Like in any relationship, you have to keep putting back into it and not just resting on those laurels.”

“We have genuine trust and respect for one another,” she continued. “We allow each other space. Of course, we enjoy each other’s company, but he has to go off on tour and I’m working on my own stuff. … We also try and demonstrate being good parents and role models for our kids. I think one of the strongest things you can do is to show each other genuine love and respect.

"We’re also blessed because we do get to travel a lot. And I think a change of scenery is a good thing in a relationship. … There’s something about experiencing something together, whether it’s just a mini road trip or an exotic island. I think that has definitely enhanced keeping the romance alive, too.”

When McKagan isn’t on the road alongside her husband, she stays busy pursuing her passions. Back when McKagan was in high school, she was discovered by fashion photographer Marco Glaviano while visiting New York City from her native Ohio with her mother.

Glaviano approached McKagan at a restaurant while he was having dinner with Jodie Foster and arranged a meeting with Ford Models. McKagan went on to appear on the cover of Vogue and walked the runway for couture houses, including Versace and Chanel.

“I was very blessed, extremely lucky to be a model in that particular era, the ‘90s,” said McKagan. “I mean, it was just incredible. I think that’s when the actual name ‘supermodel’ came to life and it was all about the models. [They] were on the cover of magazines and you saw them everywhere. It was considered extremely glamorous.

"The industry has changed immensely. … I think it was a little bit more of a certain aesthetic before and now you have girls of all sizes, all races, all ages. I think that’s really great… I really like that. … [Beauty] is subjective. So who’s to say this is what’s beautiful or not? I think the industry is finally starting to catch up with that ideology, which is really refreshing.”

McKagan has also heated up the pages of Maxim and Playboy over the years — which she said has helped her build plenty of confidence.

“[That came from practice],” said McKagan on stripping down for the camera. “Those shoots you know, those weren’t my first shoots. … And of course, I had a stellar hair and makeup team and a wonderful stylist and a brilliant photographer and flawless lighting. It really makes it all come together. And then I mean honestly, you look in the mirror and you’re like, ‘Who is this person?’ by the time you’re done with all that spackling. It’s definitely a community effort. … That definitely lends towards feeling confident in front of the camera. It’s exciting for sure.”

Still, McKagan shares that posing for the right photo is far from easy.

“I remember once being in Switzerland in ice-cold arctic waters,” she laughed. “You’re shooting bathing suits and having to smile and feel beautiful.”

These days, McKagan is gearing up to launch her new book and she hopes readers will have just as much fun diving in and getting a glimpse of her world.

“They say write what you know and what’s near and dear to your heart,” said McKagan. “It’s really been a tremendous adventure and a big learning experience and I worked very hard at it for a very long time. I think it’s nine years now… I really wanted to write something that I thought would have a long shelf life and be tremendously inspiring to people of all ages.”