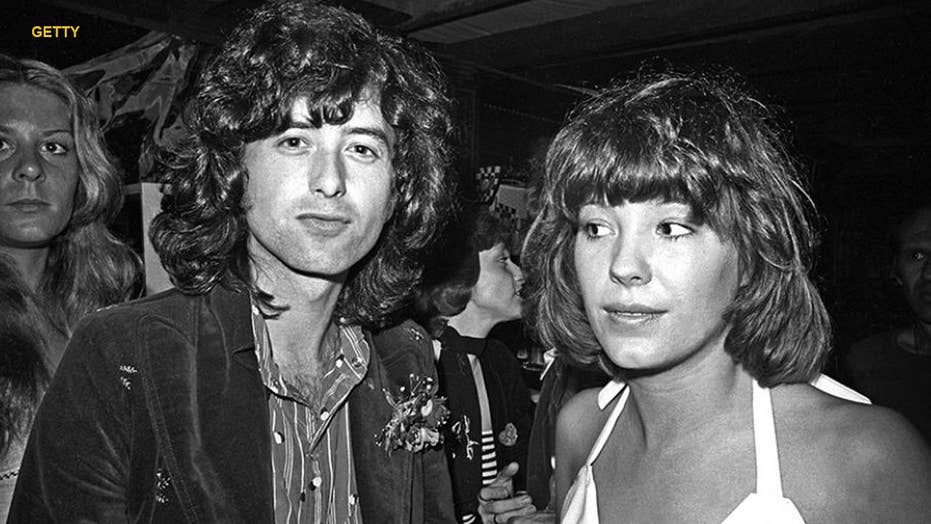 As 'queen of the groupies,' Pamela Des Barres got very close with some of music's biggest icons, including Mick Jagger and Keith Moon. But there was one rock star who earned the title of true love - Jimmy Page.

As “queen of the groupies,” Pamela Des Barres has gotten very close with some of music’s biggest icons, including Mick Jagger and Keith Moon. But there was one rock star who earned the title of true love.

“He was so romantic,” the 69-year-old recently told the U.K.’s The Sun. “He made you feel like you were the only woman alive. And he took me everywhere. I’ll never forget that night at the Elvis concert — or the hours spent with Jimmy afterward on a huge bed up on a pedestal.”

“One time I was on the side of the stage as Jimmy entranced 80,000 fans with his guitar playing,” she recalled. “From my vantage point, sitting on Jimmy’s amp, I almost felt like one of the group.

"Girls in the audience looked up at me and wondered which one I was sleeping with, and I was so proud. I was exactly who I’d aspired to be — the girlfriend of the lead guitar player in the world’s biggest rock and roll band.”

Des Barres exposed all her shocking escapades 31 years ago in her 1987 memoir, “I’m With the Band.”

Today, she’s celebrating the republication of the book but has never forgotten the backlash she initially endured from critics. She insisted some labeled her a “slut” or a “whore.”

“It’s judgmental bulls---,” she explained. “People are so uptight about sex, it’s terrible. I wasn’t some little victim. I got a lot out of those relationships. Any woman who gets out there, looks on stage and goes after someone who inspires her. That is the ultimate feminist act, surely?

“To me, great sex is like touching God, and I was lucky enough to have experienced it to the hilt and wrote about it freely, openly and joyously, when not many other women had.”

Des Barres said her encounters with rock stars first began when she was still in school and a classmate introduced her to his cousin, rocker Captain Beefheart. He quickly introduced her to The Who’s drummer Keith Moon, who became captivated by Des Barres.

“Our racy little improvisations went on long past many dawns,” she claimed. “We took handfuls of pills and he drank vodka like he was dying of thirst. He could be light and silly but he had this terrible dark side. One night, when we were in bed he broke down and started to cry, calling himself a murderer.”

Des Barres claimed Moon, then 23, confessed he had run over his chauffeur, 24-year-old Cornelius Boland, outside of a club in England in 1970. Moon said he was attempting to escape a mob of skinheads.

Rolling Stone reported at the time Moon pleaded guilty to drunk driving, driving without a license and driving without insurance. However, the court wiped out all three charges. The tragedy was ruled as an accidental death.

“Keith told me he was to blame because he was stoned,” she said. ‘He would wake up screaming. It was so sad because it was obviously an accident but he blamed himself.”

Des Barres had a more light-hearted encounter with Jimi Hendrix. She appeared in a short film dancing for his band.

“Hendrix hit on me and it’s impossible to describe his charisma, it was huge,” she said. “I didn’t sleep with him though — I was only 17 and way too young.”

But she didn’t think twice when it came to Doors front man Jim Morrison.

“I heard the Doors song ‘The End’ playing from a house nearby,” said Des Barres. “It hadn’t even been released yet, so of course I was curious.

"I wandered over to this house to find Jim standing next to his refrigerator in unzipped leather pants, no shirt, looking the epitome of rock god, singing along to his own record.”

Des Barres said she can still vividly remember “making out passionately” with Morrison backstage after a Doors gig later that night.

“I remember thinking, ‘This is the most beautiful man I have ever seen,’” she said. “He was so gorgeous, everything about him was just perfect.”

Des Barres married musician Michael Des Barres in 1973. They had a son named Nicholas in 1978. However, the couple divorced in 1991.

These days, Des Barres is looking to make her own film focusing on her fling with Jagger.

And while she enjoys reminiscing of her wild past, Des Barres said there is one musician she would go after today.

“If I were 19, [Harry Styles] is who I’d be going after,” she said. “I think he’s talented and I think he’s in it for the long haul, which is so rare in the current crop of kids.

"He’s also got that easy femininity I’ve always liked and he seems quite adorable. He’s also mysterious about his sexuality, which is fabulous — I love that.”

Back in 2017, Des Barres told Fox News she wishes she could have done some more touring.

“I could have gone on the road with the Stones,” she said. “Mick Jagger was at one point trying to pursue me. And I was involved with other people at the time. I did not go for it… I did get to spend some good quality time with him. But there were several times when I didn’t take him up on some offers that I wish I had."

And there was also that opportunity with the King.

“I could have met Elvis and spent time with him,” said Des Barres. “I declined that because I had gotten engaged to Michael [Des Barres], the man I married. I thought I shouldn't get caught up with Elvis.”

Des Barres also has wondered what could have happened if she had taken up Hendrix’s offer before he died in 1970 at age 27.

“Jimmy Hendrix hit on me, but I was a teenage virgin,” she said. “I just couldn’t go there. Not yet.”