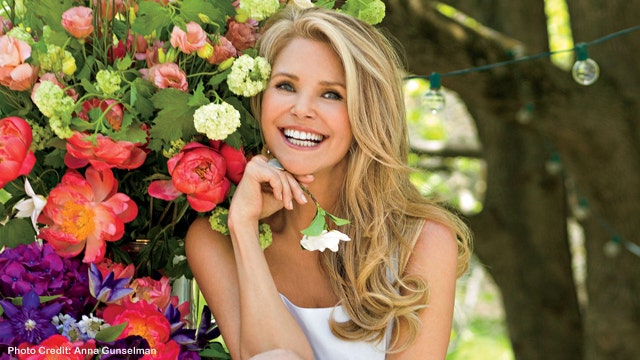 Christie Brinkley is back behind the wheel as “the girl in the red Ferrari.”

The 65-year-old supermodel reprised her iconic film role for a special guest appearance on the Season 7 premiere of ABC’s “The Goldbergs” where she pays tribute to 1983’s “National Lampoon’s Vacation.” The episode aired on Wednesday.

The Sports Illustrated Swimsuit pinup made her acting debut in the comedy classic long after she made her mark as a model in the 1970s. Brinkley played a blonde bombshell driving a red Ferrari who kept running into Clark Griswold (Chevy Chase) during a family road trip.

Entertainment Weekly previously reported that like the original character, Brinkley plays with her tousled tresses and blows a flirty kiss while driving. However, Beverly Goldberg (Wendy McLendon-Covey) makes it clear her husband can’t be lured like Griswold.

Brinkley told the outlet that over the years she’s been asked to reprise the role. However, she’s only done it a few times: for the 1997 “Vacation” sequel titled “Vegas Vacation,” as well as the “Vacation”-inspired DirecTV and Infiniti commercials.

“I think this is a really good reprisal right here, and I think it fits because both families have that same dynamic,” Brinkley explained. “In fact, when they wanted me to do the [2015 remake], they said, ‘They’ll open the door and it’ll be you and Chevy together,’ and I said, ‘Oh, no! No, no, no, you guys would ruin everything because what we loved about the first movie was the fact that they can argue, they can carry on, but at the bottom of everything they stick together and they’re a family. You can’t break up that family.’”

“So I think that there are so many similarities in that family — they’re overcoming obstacles and they don’t want to admit how much they love each other so much,” added Brinkley.

Entertainment Weekly shared that for the first time in the 35-plus year history of the character, the “girl in the red Ferrari” has a name — Aleah Welsh.

The scene was also filmed before Brinkley suffered a broken arm earlier this month while gearing up to appear on “Dancing with the Stars.” Her daughter, fellow model Sailor Brinkley-Cook, has since taken her place in the televised competition.

"My part was really easy,” reflected Brinkley on bringing her iconic role to life again. “And here we are with all these really great people. It’s paying tribute to a film that’s thirtysomething years old now and… the whole thing is just a bowl full of wonderful.”

Back in February of this year, Brinkley told Fox News she was happily embracing turning the big 6-5.

“I think that the number really doesn’t represent the modern woman today,” Brinkley explained at the time. “In the olden days, the numbers came with so many rules and so much weight on a woman. There were so many restrictions associated with certain numbers. Like after 30 you can’t wear your skirt above your knee. After 40 you shouldn’t wear your hair below your shoulders.”

“Nowadays, women are totally reshaping the numbers and giving those numbers a new image,” she continued. “To me, to be turning 65, it really could be any number. The only thing is that once you pass 50, every birthday is an opportunity to take stock and say, ‘What else do I want to do?’ And then go for it!

Brinkley also revealed how proud she was of her daughter, 21, launching a modeling career of her own.

“You know, I feel some people might say, ‘It must be so much easier with Christie Brinkley holding the door for her,’” said Brinkley. “Yes, but she has to still be able to keep that door open. She has to deal with the criticism and people claiming nepotism.

“You’re alone in this career. You walk into a room full of strangers every single day that you go into modeling. There is no routine. Every day is different. Every day you need to stand there under a light while people whisper about you while you’re being photographed. And yet you still need the confidence to project the look that they’re wanting, get along with everybody and converse with everybody."

“People don’t really know the amount of work it takes to be a model," Brinkley added. "And nobody is holding her hand as she does this profession. … I’m proud of her for being able to ignore the bullying or haters. In fact, she has empathy and compassion for them because they must be very unhappy to go out of their way to make a point to visit her personal page and write mean things.”