After Meghan McCain refused to criticize Sen. Lindsey Graham, R-S.C. on Monday's episode of "The View," she once again defended herself on Twitter.

"I literally grew up with @LindseyGrahamSC who I have always considered an uncle," the 35-year-old said. "We never have agreed on everything, and do not now. I refuse to let politics destroy my personal relationships across the board."

'VIEW' CO-HOSTS CLASH OVER WILL HURD DEFENDING TRUMP: 'HE MUST BE DEAF'

In response, comedian Chelsea Handler told McCain that she believes Graham, 64, is a different person following the death of Meghan's father, Sen. John McCain, R-Ariz. McCain died in August 2018 after a battle with brain cancer. He was 81.

MEGHAN MCCAIN UNLOADS ON JOY BEHAR, MEDIA, SAYING THEY'RE 'NAIVE' IF THEY THINK HEARINGS WILL BRING DOWN TRUMP

"I hear what you are saying, but Lindsey graham [sic] seemed to be one person before your dad died, and another person now," said Handler, 44. "There seems to be a big chasm between what could be considered honorable behavior to what is clearly now blackmailed behavior." 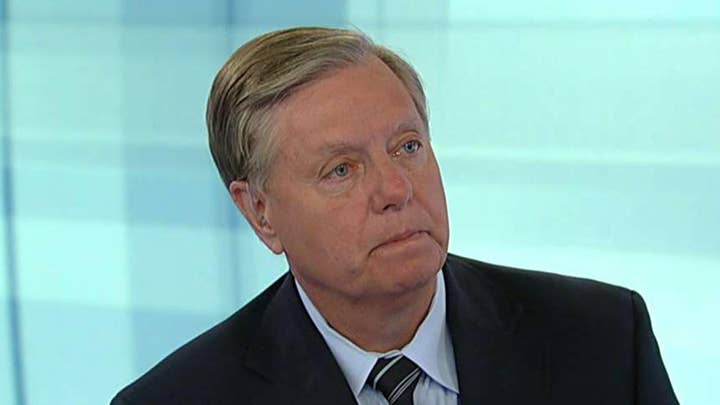 SEN. LINDSEY GRAHAM OPENS UP ABOUT DEATH OF FRIEND MCCAIN

On Monday's show, Meghan McCain said that Graham is "a good person who is making decisions that are questionable." She added that's "totally fair for everyone at the table to say."

However, she emphasized that she has known Graham since she was 10 years old and she "can’t talk crap about him.” Her comments came during a segment about Graham shrugging off a combat veteran who told Graham that President Trump "is not acting in accordance with his oath."

At the time of McCain's death, Graham admitted that he'd shed many tears over his longtime pal and colleague's passing.