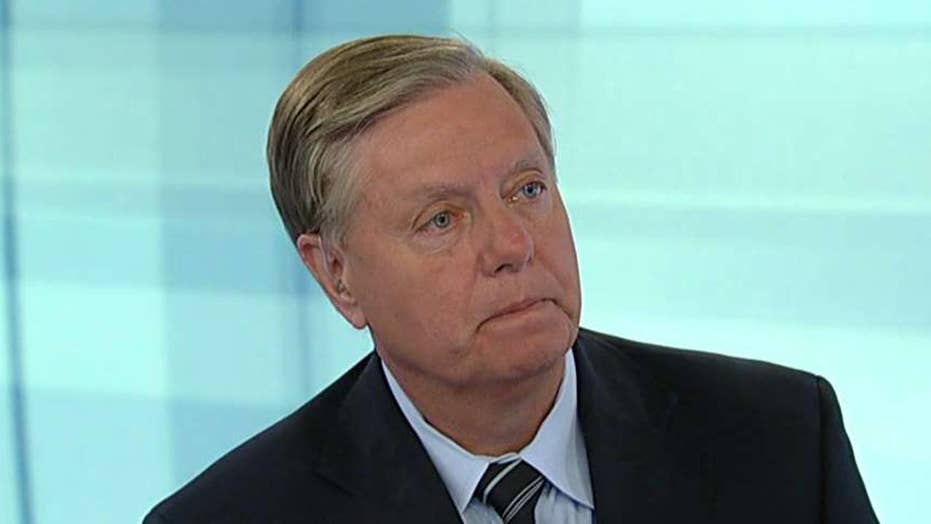 Lindsey Graham opens up about his late friend, John McCain

On 'Hannity,' Republican lawmaker from South Carolina says he wants to give John McCain the send-off he deserves.

A visibly shaken Sen. Lindsey Graham reminisced about the late Sen. John McCain in an interview with Fox News' Sean Hannity Monday night. The South Carolina Republican acknowledged he's shed many tears over McCain's death, but vowed to give his longtime friend and colleague "the send-off he deserves" when he takes the Senate floor on Tuesday.

"I have cried a lot, and I am going to try to get over it," Graham told Hannity. "Now I'm going to speak tomorrow in the Senate.  [McCain's] desk was right by mine and I hope I don't crack up."

How McCain's death will change the tone in the Senate

McCain, one of Graham's "dearest friends and mentor," died at age 81 on Saturday, and will lie in state at the U.S. Capitol on Friday. A memorial service will be held at the National Cathedral in Washington the following day — before McCain is laid to rest at the U.S. Naval Academy Cemetery in Annapolis, Maryland, on Sunday.

JOHN MCCAIN'S MILITARY CAREER, FROM HIS TIME AS A VIETNAM WAR POW TO ROLE IN PASSING DEFENSE BILL

Graham, agreeing with Hannity that McCain was a "hero," reiterated how patriotic the late senator was, and how much he adored his country.

"If I had to pick one person in the entire country to explain American to a foreigner, it'd be John," Graham said. "I mean, he had a romantic view of the nation; it never died. He loved America ... [he was] willing to die for it."

As Hannity mentioned, after his passing, several people — who weren't necessarily fond of McCain — changed their tune about the senator, later praising him for his dedication to America.

"I am better off for having known him."

Graham said McCain would appreciate the kind words, joking with Hannity: "You know what John would say? 'I'll take it where I can get it.'"

"The fact that people say good things about [McCain] now, I appreciate, but the family appreciates it," Graham said, adding that McCain is survived by his wife, Cindy, seven children and mulitple grandchildren.

Graham emphasized the huge part McCain played in his life.

"I am better off for having known him," he said. "He loved his country, and we will be talking a lot about what he did and how there’s a little John Mccain in all of us. If we can bring that out, the country would be in a good spot."

After McCain died on Saturday, Graham tweeted, "American and Freedom have lost one of her greatest champions," saying he'd need time to process his friend's death.

McCain was diagnosed with brain cancer in July 2017. Doctors discovered a tumor during a medical procedure to remove a blood clot from above his left eye. He remained upbeat after the diagnosis, flying back to Washington days after surgery with a large scar visible above his eye to partake in the Senate’s health care debate.