Whether you have an ear for gospel music, southern rock songs or that country twang, one thing is certain: Charlie Daniels serves it to you straight.

Few acts have left a fixed imprint on music, and even fewer continue to own the road like Daniels and his band. The road warrior is pushing 83 years old and has no plan of stopping anytime soon. “As long as it’s in God will, if people want to hear me, I’ll keep doing it,” he says about his stamina.

CHARLIE DANIELS SAYS HE'S NOT A FAN OF NEW COUNTRY MUSIC: 'I CAN'T TELL ONE SONG FROM ANOTHER'

But it's not just the music and the devoted fans that get Daniels excited every day.

The legendary crooner has long carried a special place in his heart for the country he calls home and that so many true warriors have fought and died for.

It’s the veteran servicemen and women whom Daniels aims to help every day through the Journey Home Project, a nonprofit he created with the help of his manager and a group of committed individuals who want to see change for so many veterans who have given their sacrifice for their country.

Daniels spoke with Fox News about his love for our nation and why he feels it's paramount to educate people on the challenges and hardships facing many veterans who are fortunate to return home.

"My manager, myself and some other people started this Journey Home Project to help — we've come to find out there is a great need for assistance by veterans who are returning from their service. Most of the people that we deal with haven't gotten that," said Daniels.

"We all know the agencies that are tasked with helping our military people are bureaucracies that, by nature, grind slow," Daniels added. "So there are immediate needs and slow bureaucracies, and we kind of step in and try to help out." 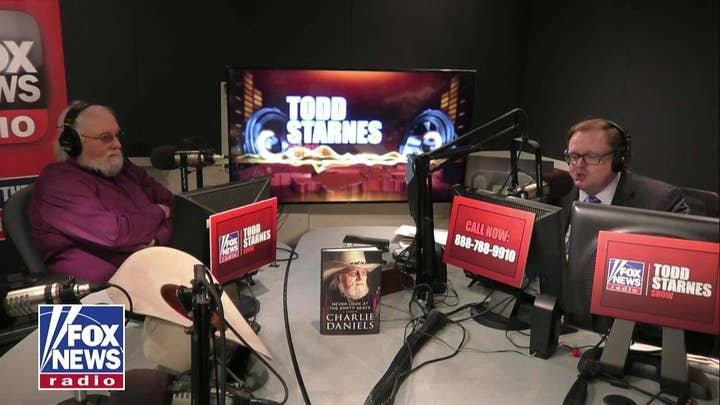 The "Charlie Daniels Patriot Award Dinner" earned $200,000 for America's veterans and all of the proceeds from the evening went to Daniels' veterans non-profit. The multi-platinum artist says that although his organization is small, they pack a lot of pride and haven't met a challenge they couldn't tackle.

"We've done things as mundane as buying a bicycle for a guy to ride to work. We've helped people get medical care, we've helped people get educated and try to help people get jobs. Just whatever we can do to help ease the burden on our veterans when they come back from [service]," said Daniels, who pauses before he laments the harrowing ordeals many of our military people endure.

CHARLIE DANIELS: THE PLACE I'M MOST THANKFUL FOR

"You know, you go into service for 20 years, and especially the people who were once in combat, you go into service and come back and you're walking into a different world," he said. "You're walking from a regimented world where everybody gets involved in the same situation into a place where you're dealing with a bunch of civilians who don't know anything at all about what it's like to put on your battle rattle and walk out into where there are IEDs and people shooting at you"

"It's a whole other world that they have not been living in but they — of course, it's an individual thing — some people need more than others need. Some people come back with bad cases of PTSD and they desperately need help, but it may be years after the fact until they discover this," added Daniels.

The Grammy winner explained how shocked and saddened he was when he came across the staggering number of veterans who kill themselves each day. Daniels said he hopes the government can listen to its veterans and get them the help they need in an effort to reverse the epidemic.

“We're just trying to be there for them — for all of our veterans. One of our things now is the veterans suicide rate; 22 veterans die by suicide every day," said Daniels. "When I found it out, I put it on my Twitter account — I now do that every day. I want people to know the stat. I want people to understand that. A lot of people are still just discovering it."

CHARLIE DANIELS: I BELIEVE THE AMERICAN DREAM IS STILL ALIVE, I LIVE IT EVERY DAY

Daniels also added that he works closely with the Jason Foundation, a Nashville-based nonprofit started by a father who lost his teen son to suicide. Daniels said that after looking at the data, he knew he could help veterans and needed to educate people on just how close to tragedy we might be at any given moment.

Charlie Daniels sounded off on Senator Chuck Schumer on Twitter over Schumer's stance on immigration. (AP)

"I had no idea how pandemic this thing was," he said. "At one time, it was the second leading cause of death in teenagers and he started this foundation to try to educate teachers insofar as the major sites were concerned to educate peers and parents to be alerted to what kids who are in jeopardy or what their actions at all were."

He pleaded, "The communication somehow between what the needs are actually down here on the street level and what the government does about the people that are supposed to do this, there's a total disconnect variance. You know, there's this great need for this."

Daniels went on to explain that for the Journey Home Project, in particular, they do whatever they can, wherever they can to help.

"...Because we're a small foundation, we don't deal in millions and millions of dollars but we find needs that our budget will fit," he shared. "Or we help other organizations that are involved in doing the same thing and we combine our money with theirs and they're able to do a lot of good with it, you know? We find individual cases and people that are within our means to do something about it and we try to fill in."